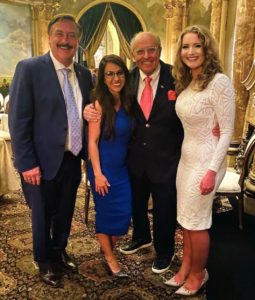 As the Phil Anschutz-owned Washington Examiner’s Marisa Schultz reports today, the Republican chairman of the U.S. House Oversight “Q-mittee,” to which newly-installed Speaker of the House Kevin McCarthy appointed nether-right rivals Marjorie Taylor Greene of Georgia and Lauren Boebert of Colorado, is laying down a warning to the committee’s newest crackpot conspiracy theorists that evidence-free flights of fancy won’t be tolerated:

The House Oversight Committee chairman leading investigations into President Joe Biden said his panel being stacked with “MAGA” firebrands will not undercut the seriousness of the committee’s work.

Rep. James Comer (R-KY) brushed off reports that the White House was celebrating the appointment of Reps. Marjorie Taylor Greene (R-GA), Lauren Boebert (R-CO), and Paul Gosar (R-AZ) to his committee, saying he talked to the newest and most outspoken members about keeping the committee on track.

“They’re all passionate about oversight,” Comer said in an interview with the Washington Examiner. “And I’ve spoken with them, and I said: ‘We’ll probe and investigate lots of things, but nothing’s going on Oversight stationary unless there’s evidence to back it up.’” [Pols emphasis]

It’s a pre-emptive admonition that seems to concede some of these new members like Greene and Boebert would be perfectly fine wasting the Oversight Committee’s precious time with “MyPillow Guy”-grade conspiracy theories if not kept on a short metaphorical leash. Which calls into question their suitability to service on the House Oversight Committee to begin with, but as readers know it wasn’t Rep. James Comer’s decision to make.

Can Chairman Comer hold the “MAGA Qaucus” blowhards installed on his committee to his word, and keep their investigations rooted in evidentiary reality? Can MTG and Boebert restrain their deepening personal animus long enough for the Oversight Committee to do its job credibly trolling the Biden administration? Or will the Jewish space lasers rain fire like Elijah called down from Heaven to impress the backsliding prophets of Ba’al?

Put on your hip waders and stay tuned.