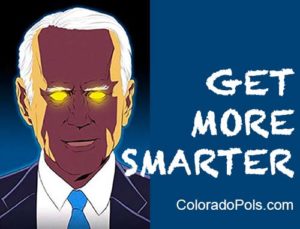 Happy Cyber Monday! A quick note before we get started: Some of the items in today’s Get More Smarter are a few days old because of the Thanksgiving holiday break. If you think we missed something important, please include the link in the comments below (here’s a good example). If you are more of an audio learner, check out The Get More Smarter Podcast. And don’t forget to find us on Facebook and Twitter.

► Senator Michael Bennet (D-Denver) is hoping to use a lame duck session in Congress to revive an expanded child tax credit program. As Nick Coltrain reports for The Denver Post:

Bennet has long championed the expanded child tax credit and helped secure its inclusion in 2021’s American Rescue Plan Act. Under that temporary program, parents received $300 per month and per child younger than 6, and $250 per month for children 6 and older. It scaled lower if households made higher incomes.

It only lasted about half a year, however, and expired in January. U.S. Sen. Joe Manchin, a Democrat from West Virginia, tilted the odds against its continuation in an evenly split Senate. He cited concerns about inflation and that it discouraged people from working.

Despite its short lifespan, the Census Bureau credited it with nearly halving childhood poverty in the country. Its analysis found that the expanded tax credit lifted some 5.3 million Americans, most of whom are children, out of poverty. That doesn’t include the millions more who weren’t in poverty but otherwise benefited from the expanded credits.

Colorado Public Radio has more on what Democrats hope to accomplish in the final weeks of the current Congress.

► President Biden is pushing hard for a new Assault Weapons Ban in Congress after another week of mass shootings around the country. From The Associated Press:

“The idea we still allow semi-automatic weapons to be purchased is sick. Just sick,” Biden said on Thanksgiving Day. “I’m going to try to get rid of assault weapons.”…

…A weapons ban is far off in a closely divided Congress. But Biden and the Democrats have become increasingly emboldened in pushing for stronger gun controls — and doing so with no clear electoral consequences.

The Democratic-led House passed legislation in July to revive a 1990s-era ban on “assault weapons,” with Biden’s vocal support. And the president pushed a ban nearly everywhere that he campaigned this year.

Still, in the midterm elections, Democrats kept control of the Senate and Republicans were only able to claim the slimmest House majority in two decades.

The tough talk follows passage in June of a landmark bipartisan bill on gun laws, and it reflects steady progress that gun control advocates have been making in recent years.

Meanwhile, expect to see more pushback against local elected Republicans who refuse to use tools such as “Red Flag” laws that might have prevented the mass shooting in Colorado Springs.

► Lindsay Datko, the nutball leader of the “Jeffco Kids First” organization that played a significant role in promoting the widely-discredited nonsense about “furries” in schools (which GOP gubernatorial candidate Heidi Ganahl talked about incessantly) is now pushing a new lie via Facebook. The message below is complete nonsense; Colorado Community Media is NOT considering a retraction of this October story from reporter Rylee Dunn.

► Don’t miss the latest episode of The Get More Smarter Podcast, featuring an interview with Congresswoman-elect Brittany Pettersen providing a look behind the curtain about how newly-elected Members of Congress get acclimated to Washington D.C..

► Sara Wilson of Colorado Newsline looks at how Republican Rep. Lauren Boebert’s 500-vote victory over Democrat Adam Frisch might reshape the race in CO-03 in 2024.

► Many Colorado Republicans seem to be gravitating toward Florida Gov. Ron DeSantis for President in 2024 instead of the former guy, Donald Trump. This even appears to include Rep. Lauren Boebert, a longtime Trump acolyte.

► Republican election denialism doesn’t seem to be gaining much traction in the aftermath of the 2022 elections. Even in Arizona, crazypants Republicans appear to have lost interest in pretending that the election was “stolen” from their wacko candidates.

► Some Colorado Republicans who are upset at historic beatdowns in 2022 have decided that the best way forward is to promote Republican candidates who are MORE extreme.

► The Republican-created “Common Sense Institute” (CSI) is apparently lacking the main quality in its title. As Erik Maulbetsch reports for the Colorado Times Recorder:

…Asked via email whether the Common Sense Institute has any concerns about its founder sharing debunked conspiracy theories with a Trump attorney who had publicly attempted to overturn the election, Executive Director Kelly Caufield declined to answer…

► Michael Roberts of Westword digs into one of the biggest 2022 upsets that you might not have heard about: Democrat Bob Marshall winning a State House seat in Douglas Freaking County.

► A Republican vacancy committee selected Ron Weinberg to fill the seat vacated by the death of Hugh McKean.

► As The Washington Post reports, roughly 9 out of every 10 COVID-19 deaths in the United States are among Americans older than the age of 65.

► Grocery stores will be able to start selling wine in Colorado on March 1, 2023. Proposition 125 was the only one of three alcohol-related ballot measures to pass in Colorado in 2022.

► Colorado Public Radio explains the next steps in Colorado now that voters approved the legalization of “magic mushrooms.”

► Patti Davis writes in the New York Times about what we might expect to see from Donald Trump if the former President starts getting ignored with more frequency.

► If Republican Kevin McCarthy does end up becoming the next Speaker of the House, he’ll have to give away the farm to right-wing extremists in his party.

Colorado Springs Republican Rep. Doug Lamborn had a few absurdly-vague things to say about the mass shooting at Club Q in his district…er, the “horrible situation.” 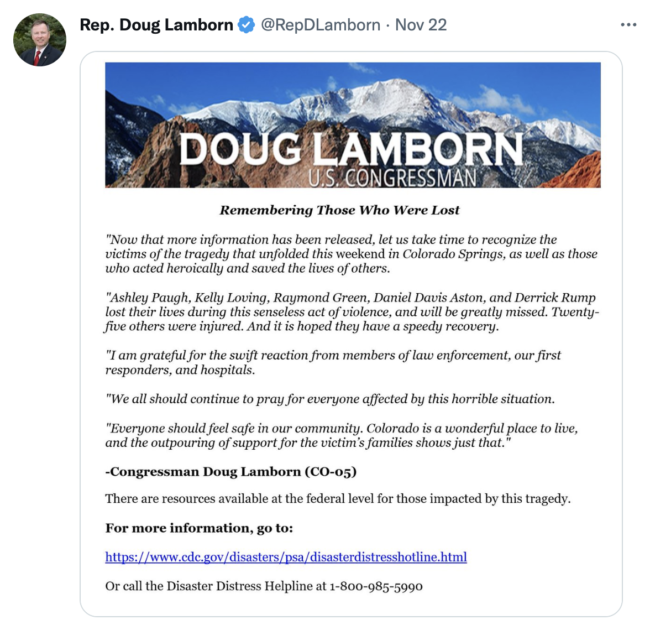 ► The MyPillow Guy wants to be the next Chairperson of the Republican National Committee (RNC). As The Hill newspaper reports:

MyPillow CEO Mike Lindell is considering a challenge to Ronna McDaniel as head of the Republican National Committee (RNC).

“One of the things I will tell you, you know, [we] will never, ever stop to get rid of these machines and make this the best elections in world history in our country. We need someone, everybody, and I’ll step into that if God willing,” Lindell, a staunch supporter of former President Trump and his false claims of 2020 election fraud, said on his FrankSpeech TV platform.

Lindell told the Huffington Post that he may make a decision today on running for RNC Chair.

► Congressperson Marjorie Taylor Greene says that former President Donald Trump and his wife, Melania, are very sad that some of the people who broke the law during the Jan. 6, 2021 insurrection are now incarcerated.

► The Colorado Times Recorder provides a roundup of anti-LGBTQ rhetoric from Colorado Republicans in the last year — an issue that gained new importance in the aftermath of the mass shooting in Colorado Springs.