UPDATE: Were they not so undeserving of pity, we’d almost have some:

Colorado fascist Joe Oltmann takes the mic. Oltmann & other organizers have been calling for people to occupy the grounds of the Phx Capitol until a “revote” happens. Oltmann asks how many will stick around with him. Nobody raises their hand. “I’ll be here by myself,” he responds pic.twitter.com/lLe83P1W95

Go about your business, folks. The revolution will not begin today.

The word went out before the Thanksgiving holiday that Black Friday 2022 would be the day (you’ve heard this before but for real this time) that the election stealers across this great country finally get some ‘countability. Although Colorado’s Heidi Ganahl lost her race by numbers that not even the most devoted election conspiracy theorist could dispute–and she did consult with them–Colorado’s leading conspiracy theorist podcaster who wants to hang a whole slew of people including Gov. Jared Polis, Joe Oltmann, called for patriots to converge on the Arizona State Capitol in Phoenix this morning to demand a new election for defeated GOP gubernatorial candidate Kari Lake: 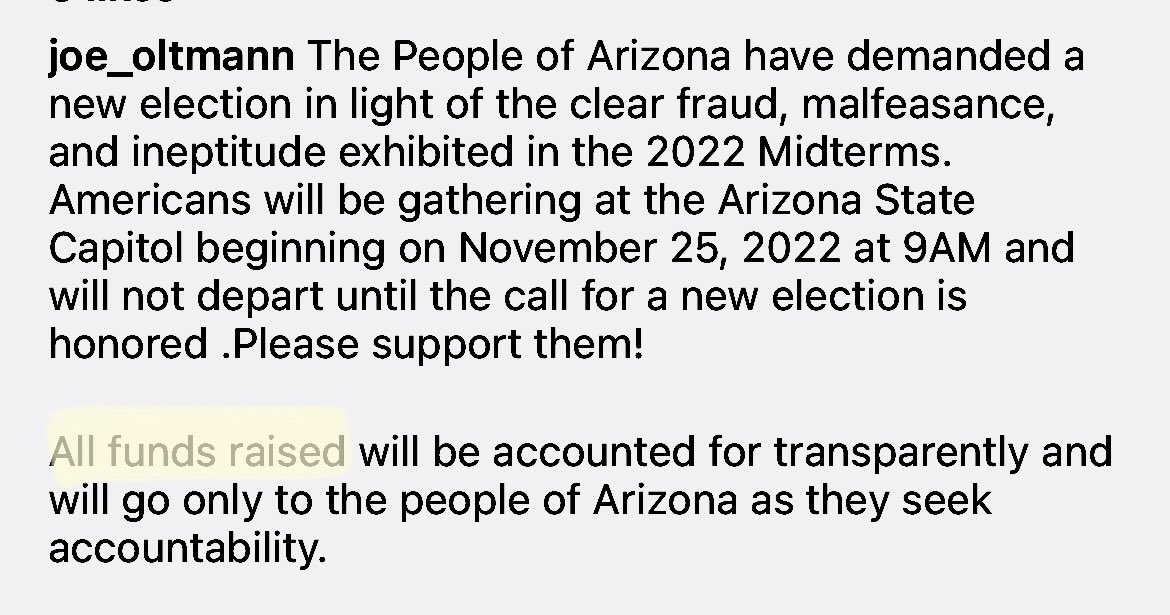 We don’t know how long these patriots intend to “Occupy” the Arizona Capitol grounds, but the weather in Phoenix is pretty nice this year so there are no worries about them freezing to death in their little encampment. Also, sources on the ground are reporting that patriot potty breaks will not be a problem:

Two hours in and there are officially more porta-potties than patriots 😂 pic.twitter.com/Plkg93u8Ns

Because while Oltmann can’t seem to draw a crowd, there appear to be a plethora of Porta-Potties.

At this point we think it’s best to let them get it out of their system, with relief that it wasn’t much worse. Kari Lake won’t get a do-over of the election she lost, and the general shrug her allegations of fraud are receiving is a welcome sign that Donald Trump’s election denialism might end with Trump. A whimper of a protest to cap off Kari Lake’s Trump-like strategy of election pre-denial could be interpreted as a sign of American politics working back to the status quo ante.