Joe O’Dea: Con Man, Or Victim Of A Long Con? 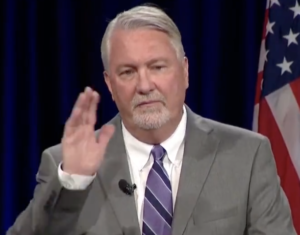 The dust is settling after the sweeping Democratic triumph in Colorado in the 2022 elections Tuesday, turning what was once hyped as a coming “red wave” into a cementing of total control over state government by Democrats, expanding their majorities in the Colorado House and Senate and easily re-electing the downballot statewide Democrats who historically were regular victims of ticket-splitting. The results of the 2022 election show much less ticket-splitting in general than prior elections, with voters staying faithful to Democratic candidates all the way down the ballot.

In the closing weeks of the campaign, as readers know, the poll averages maintained 538 and other aggregators were pretty close to the outcome in the two top Colorado races: clearly showing gubernatorial candidate Heidi Ganahl losing in excess of 15% and U.S. Senate candidate Joe O’Dea losing around 10%. But in the final days before Tuesday’s election, Colorado’s poll averages in the Senate race were thrown off by what we now know were highly inaccurate partisan polls showing Republicans far more competitive than would turn out to be the case. As the Washington Post’s Dana Milbank reports, those bogus last-minute polls were part of a Republican headfake to motivate their own base and fool gullible reporters:

Political journalists were suckered by a wave of Republican junk polls in the closing weeks of the campaign. They were also swayed by some reputable polling organizations that, burned by past failures to capture MAGA voters, overweighted their polls to account for that in ways that simply didn’t make sense. And reporters fell for Republican feints and misdirection, as Republican operatives successfully created an artificial sense of momentum by talking about how they were spending money in reliably blue areas…

It was telling that Republican campaigns didn’t release their own polls to confirm the dubious results Trafalgar and Rasmussen were producing. Still, such polling helped skew handicapping websites. RealClearPolitics, for example, moved Sen. Michael Bennet (D-Colo.) into “toss-up” status in the closing days of his reelection bid. Bennet beat his Republican opponent by double digits. [Pols emphasis] 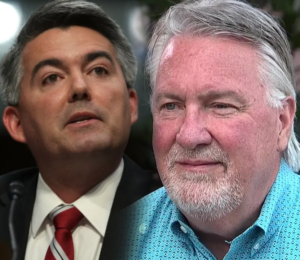 Coming into the 2022 elections, Democrats nationwide were battling against an entrenched presumption that the party in power always suffers during the midterms. In Colorado, facing an electorate very much soured on the GOP brand, Republicans tried to position themselves as “a different kind of Republican” in the Cory Gardner mold–but general election voters never believed it according to the polls. Hype and spin from the campaign aside, O’Dea never lived up to the post-partisan image he wanted to project, and the “moderate” veneer O’Dea tried so hard to hold together fell apart under scrutiny. Attempts to show an endearing personality like riding his horse through the suburbs to get strip-mall sushi instead became punchlines for jokes about out-of-touch rich people.

As Election Day approached and the polls continued to show the major Colorado races locked in their respective ranges, the sudden bewildering announcement that Real Clear Politics had moved the Colorado Senate race to a toss-up gave Joe O’Dea’s campaign an infusion of false hope.

Real Clear Politics has shifted its prediction of a hotly contested Senate race in Colorado from leaning toward Democratic victory to a “toss up” as several high profile races across the country continue to tighten with Republicans hoping to take back control of the chamber next week.

On its updated election prediction map, Real Clear Politics now shows the race between Democratic incumbent Sen. Michael Bennet and his challenger, Republican construction magnate Joe O’Dea, is classified as a “toss up” after previously being viewed as “Leans Dem.”

The fake polls showing the race tightening led directly to this: 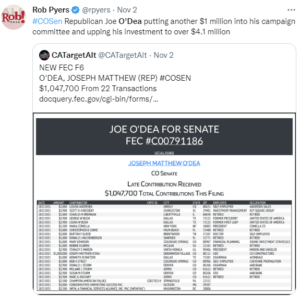 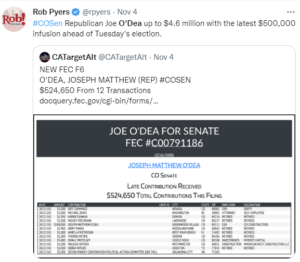 While Real Clear Politics moved Colorado’s Senate race to a “toss-up” based on polls that turned out to be completely wrong, O’Dea poured another million and a half dollars of his own money into his campaign–a significant percentage of the total of $4.6 million O’Dea ponied up throughout the race. It’s one of the clearest cases we’ve ever seen of a candidate “believing his own bullshit,” throwing good money after bad in a race that ended up close to the worst-case scenario.

That brings us to a central question of Joe O’Dea’s failed Senate campaign.

Did O’Dea’s campaign consultants, led by Josh Penry, take him for a ride?

Joe O’Dea proudly ran as a candidate with no political experience, and despite repeated promises never received significant outside help from national Republicans. This resulted in O’Dea, with a net worth upwards of $77 million, funding this race largely by himself–despite promises from Republican leadership like Mitch McConnell, who declared the party “all in” for O’Dea but never followed those words up with dollars. And when these last-minute fake polls flooded the averages, O’Dea’s consultants, who knew or should have known those polls were not reliable, nonetheless did not prevent O’Dea from dumping another million and a half into what we now know was a futile effort.

Looking at his race with the benefit of hindsight, O’Dea’s duplicitous attempt to triangulate off the Republican brand while bringing a who’s who of Republican big names to the state to campaign for him could be reasonably termed a con job. But it’s also possible that Joe O’Dea was the victim of a larger and longer con job, by consultants who pretended this campaign had a shot in order to extract money from Joe O’Dea.

Joe O’Dea never had a chance. If any one of O’Dea’s “crew” of loyalists had been honest enough to say so, he could have saved a lot of money. Instead, “Joe’s Crew,” with the help of the Republican fake news industrial complex, fleeced their sucker to the very end.