Tom Cotton Is Not A Nice Man, Joe O’Dea 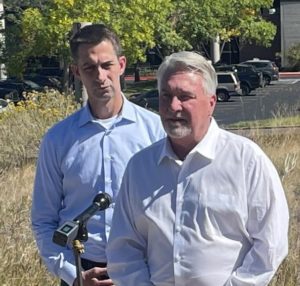 As the Denver Post’s Nick Coltrain reports, Republican U.S. Senate candidate Joe O’Dea, running on a counter-brand triangulation strategy to minimize the negatives of running as a Republican in a blue-trending state, made another head-scratching move to confound that message by inviting far-right firebrand U.S. Sen. Tom Cotton of Arkansas to campaign with him in Greenwood Village:

Cotton, an Arkansas Republican, is a high-profile surrogate for conservatives who frequently campaigns for like-minded candidates. Having O’Dea serving in the Senate — and part of a Republican majority — would mean strides in beefing up border security, Cotton said…

O’Dea, Cotton and moderator George Brauchler tied border security to the fentanyl crisis, arguing that an overwhelmed border patrol leaves more gaps for cartels to smuggle the opiate into the country.

But as Coltrain fact-checks in real time, which we love and don’t see enough:

A recent study by the libertarian Cato Institute found that more than 90% of fentanyl seizures at the border happen at legal crossing points, not illegal migration routes, and 86% of convicted fentanyl traffickers are U.S. citizens. The study also found a miniscule number of people arrested for illegal border crossing — .02% — had any fentanyl on them whatsoever.

In short, the whole premise of O’Dea’s event with Sen. Cotton is bogus. And that’s as good a segue as any into the background of Sen. Tom Cotton, whose record as one of the most cantankerously partisan and factually indifferent members of the GOP Senate caucus makes him a inexplicable choice to show off to Colorado swing voters. In 2020, Cotton wrote a New York Times op-ed that called for turning the military on racial justice protesters, resulting in backlash and ultimately the resignation of the editorial page editor. Cotton has said that the only problem with the notorious Guantanamo Bay prison is “too many empty beds,” that “waterboarding isn’t torture,” and that “bombing makes us safer.”

Just a few days before his appearance with Joe O’Dea, here’s what Sen. Cotton was up in arms about on Fox News:

Folks, there’s no “supposed” problem with white supremacists in the military. There’s a very real problem, which the Pentagon has acknowledged and is trying to fix. Sen. Tom Cotton of Arkansas’ defensiveness over this unfortunate reality raises some pointed questions.

Perhaps after Joe O’Dea admits to his mistake on fentanyl, he can answer some questions about white supremacy in the military? In both cases it’s O’Dea’s own choices that make these questions relevant. Nobody forced O’Dea to bring one of the Senate’s most truculent partisan combatants to Colorado any more than O’Dea was forced to kiss Mitch McConnell’s ring. While Michael Bennet goes rafting with Mitt Romney, Joe O’Dea trots out partisan usual suspects to frighten voters with known falsehoods.

The contrast could not be plainer.