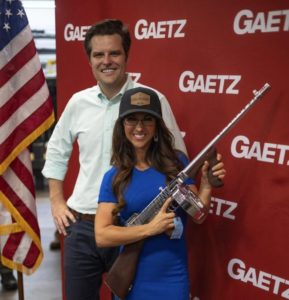 As the Pueblo Chieftain’s Anna Lynn Winfrey reports, Colorado freshman GOP tempest in a tinfoil hat Rep. Lauren Boebert appeared this weekend at the Pueblo County GOP’s annual fundraising dinner, bringing with her one of the only members of Congress who can hold a candle to Boebert as a walking, talking far-right freakshow: Rep. Matt Gaetz of Florabama, strutting tall after breathing a sigh of relief that he (probably) won’t face charges in a minor sex trafficking case–minor being the age of the alleged victim, not the severity of the crime.

Before Gaetz even had a chance to stink up the joint, Boebert delivered her well-worn applause lines to the usual cheers:

“I love dealing with you, seeing you, looking you directly in the eyes, hearing about the issues that matter most to you, and then coming up with a solution in the swamp to try to get things right. After all, I am from the federal government, and I’m here to help,” Boebert said with a smile, eliciting laughs from the crowd…

“I get it, Pueblo. Climate change is absolutely real. It happens four times every year,” Boebert said. [Pols emphasis]

That’s one of our favorites, but as it turns out Boebert was just a warmup for Matt Gaetz–to bring it home with a tirade of acronymous paranoia that you have to just sit back and let wash over you like Gallagher smashing a watermelon:

[Gaetz] reflected on the mission of what President Joe Biden referred to as “ultra-MAGA Republicans.”

“I think he’s talking about us, Lauren,” Gaetz said.

“You know what? I come from the fighting wing of the Republican Party and I think it’s time to put us back in the middle of ring,” Gaetz said to loud applause from the crowd. “Circumstances have changed so much in our country. When I first ran for Congress in 2016, I thought the FBI and the CDC were the good guys. I woke up one day, and the CDC wanted the power of the CIA, and ended up with the credibility of CNN.” [Pols emphasis]

If you can set aside the fact that it’s completely unhinged crazy talk, it’s possible to actually be entertained by Gaetz’s voluble showmanship. If Gaetz ever does fall from grace he’ll have a bright future on the car lots and carnival midways of America. Though beloved by the Republican faithful, the damage done by both Boebert and Gaetz occurs principally outside their districts as their names and faces are used in campaign ads against Republicans all over the country. With that said, of all of the “America First” clique of extreme-right members of Congress, Boebert’s +7 GOP district is the most vulnerable–much more so than Gaetz or fellow MAGA freakshow Rep. Marjorie Taylor Greene.

If Steel City doesn’t want Matt Gaetz skeezing up their town on the regular, they have an alternative.