Matt Gaetz And Lauren Boebert Let It All Hang Out 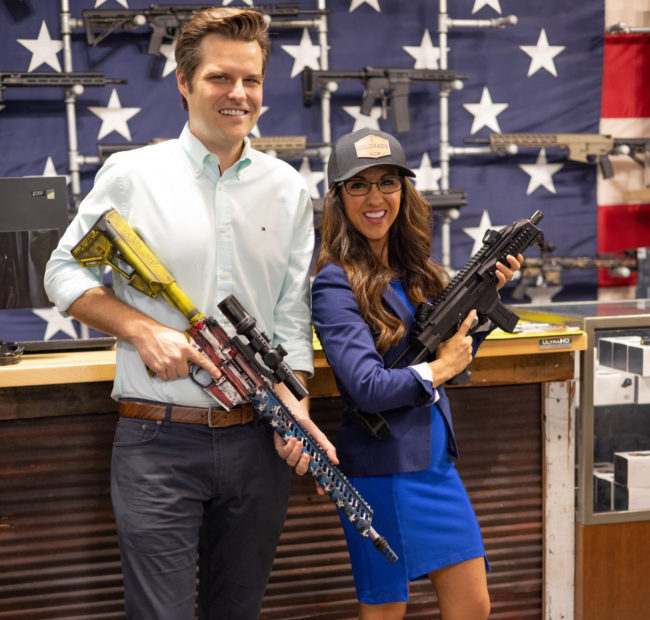 As the Pensacola, Florida News-Journal reports, embattled Republican Congressman Matt Gaetz, under investigation for child sex trafficking while fighting off a primary challenge in next Tuesday’s primary, barnstormed his northwest Florida district this week in the company of Colorado’s freshman GOP outrage manufacturer Rep. Lauren Boebert:

Rep. Matt Gaetz finds himself playing defense in his GOP primary and has brought in “MAGA” allies in Congress to campaign in Northwest Florida.

Gaetz arrived with Boebert, a fellow House member and firebrand Republican. Gaetz promised that if re-elected, he would be the “strongest member of Congress fighting for our gun rights and our Second Amendment rights.”

Boebert boasted she and Gaetz had become “professional RINO (Republican in Name Only) hunters.” [Pols emphasis]

Boebert’s public-facing relationship with Gaetz has ebbed and flowed over the past two years, roughly in line with the level of publicity being given to Gaetz’s scandals. In April of 2021, when the investigation into Gaetz seemed close to a climactic frog-marching conclusion, Boebert dodged questions about Gaetz rather ridiculously:

“Isn’t he from Florida? I’m from Colorado,” GOP Rep. Lauren Boebert said in response to questions about Gaetz.

The joke, of course, being that Boebert is also from Florida. But it’s clear today that Boebert has no compunctions about hitting the campaign trail with an alleged sex trafficker and pedophile, putting to rest the idea that Boebert was smart enough to realize at some point in the last two years that Gaetz is contagiously toxic. As for Gaetz himself, the lengthy investigation into his alleged crimes will be back in the news in December with the sentencing of Gaetz’s alleged “wingman” Joel Greenberg–unless the Justice Department takes action against Gaetz sooner. It’s been suggested that Gaetz’s candidacy for re-election is a reason the Justice Department has been holding off so as to avoid the appearance of playing politics.

If that’s right, like Colorado’s Tina Peters whose status as a candidate resulted in all kinds of special pre-trial privileges, Gaetz has a lot riding on next Tuesday’s primary.

And Boebert, feeling invincible after her primary blowout, has simply thrown caution to the wind.