UPDATE: Or not, as the New York Times reports:

Representative Matt Gaetz, Republican of Florida and a close ally of former President Donald J. Trump, is being investigated by the Justice Department over whether he had a sexual relationship with a 17-year-old and paid for her to travel with him, according to three people briefed on the matter.

Investigators are examining whether Mr. Gaetz violated federal sex trafficking laws, the people said. A variety of federal statutes make it illegal to induce someone under 18 to travel over state lines to engage in sex in exchange for money or something of value. The Justice Department regularly prosecutes such cases, and offenders often receive severe sentences.

Somebody inform “QAnon,” their “pedo” may finally have been located. 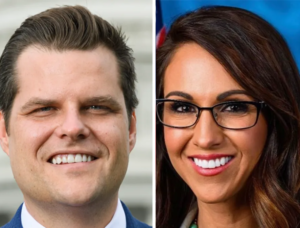 That’s the rumor going around via Axios:

Why it matters: Gaetz is a provocative figure on the right who’s attracted attention by being a fierce defender of former President Trump. The Republican also represents a politically potent district on the Florida panhandle.

Rep. Matt Gaetz of Florida, as readers know, struck up a fast friendship with freshman Rep. Lauren Boebert of Colorado on account of their very similar platform of low-information MAGA red meat boisterously shoveled in heaping quantities for consumption by an adoring social/conservative media audience. They also both have what can be best described as a strained relationship with reality.

Gaetz is the kind of politico for whom mouthpiece afforded by serving in Congress is very much an end unto itself, and especially serving in the minority party the actual day-to-day work of serving in Congress just isn’t very satisfying. It’s a bug we could easily see Boebert herself catching in the event 2022 starts to look inconvenient–either from a Republican primary, a Democratic challenger, or any number of other wrinkles that have cropped up in Boebert’s brief tumultuous time in the spotlight.

As for Rep. Gaetz, we wish his face made for radio all the best on television.