As the issue of abortion rights surges in importance for voters in 2022, the re-election campaign for Sen. Michael Bennet (D-Denver) is making sure that Coloradans understand that one of the most important tests for a candidate for U.S. Senate is their support for the Supreme Court Justices who voted to essentially overturn Roe v. Wade in June.

Bennet’s campaign is up with a new television ad on the abortion issue that highlights the fact that Republican candidate Joe O’Dea has been clear that he would have backed all of the recent SCOTUS nominees whose decision on Dobbs v. Jackson eliminated the federal right to an abortion: 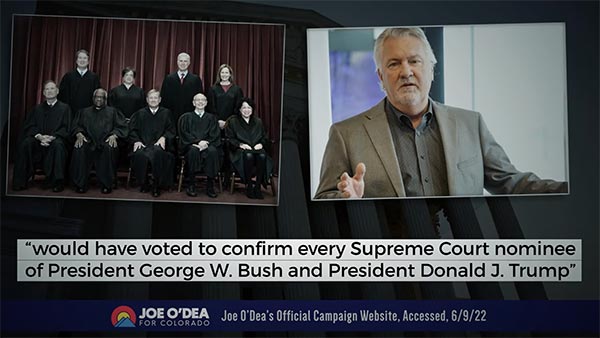 Senator Bennet explained the importance of O’Dea’s support for the SCOTUS Justices who overturned Roe during an appearance this week on the Get More Smarter Podcast:

“I mean, that is a pitiful position to be in.”

BENNET: Most importantly, he says he would have voted for all of Trump’s radical Supreme Court nominees, KNOWING that they voted to reverse Roe v. Wade. It’s one thing…if you’d said on the front end — certainly I think it would have been a huge mistake for a Senator representing Colorado on the front end to say, ‘I’m going to vote for one of these people because I’m going to take it on faith that they’re not going to reverse Roe,’ that would have been one thing. But he has the benefit of knowing that they actually led the reversal of Roe v. Wade, and still he says he would have voted for them. [Pols emphasis]

So, you know, Colorado’s not going to be suckered by what he’s saying about this. They understand that he’s trying to make a political position. What’s more important than all of this is that we have just lost the first fundamental right — the first fundamental Constitutional right in American history. We’ve never lost a right before.

The other most obvious juxtaposition is how he claimed to be in favor of maintaining Roe v. Wade’s protections, yet acknowledged he would have supported Supreme Court Justices Neil Gorsuch, Brett Kavanaugh and Amy Coney Barrett.

O’Dea has talked himself in circles in an effort to stake out a less-offensive position on abortion rights, but his firm stance of support in favor of the Supreme Court Justices who overturned Roe v. Wade makes the rest of his dancing a moot point.