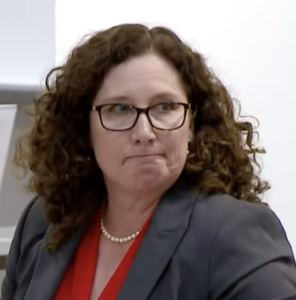 In one of the most-watched GOP races in Colorado’s primary election night, Tina Peters – Mesa County’s indicted clerk and recorder — lost her primary bid and will not face Democratic incumbent Jena Griswold this fall for the race to be Colorado’s next Secretary of State.

Peters has long been a champion of false claims that the 2020 election was stolen. She was arrested earlier this year on ten counts of tampering with election equipment and official misconduct related to her alleged efforts to try to uncover fraud involving the voting machines in Mesa County. Peters continues to defend her actions and maintains she did nothing wrong. Reports based on the hard drives of those machines have been debunked.

On Tuesday Peters also denied the results of the primary vote.

“We didn’t lose. We just found out more fraud,” Peters told supporters at a watch party on the rooftop patio of the Wide Open Saloon in Sedalia looking out over the foothills south of Denver…

Mesa County Clerk Tina Peters, who is facing trial on a range of criminal charges related to a breach of election system security on her watch in a failed attempt to supply evidence that the 2020 presidential election was stolen, also had the dubious distinction of being the only candidate in the race the Colorado Republican Party had called upon to pull out after Peters’ indictment by a grand jury. Despite this, the race was considered a bellwether to test the enduring strength of Trump’s election conspiracy theories with Colorado Republican primary voters. The third candidate in the race, Mike O’Donnell, refused to say whether he believes the 2020 presidential election was stolen, and was positioned as the alternative to Peters for Republicans who couldn’t stomach Pam Anderson’s disloyalty to former President Donald Trump.

Although Anderson prevailed, the results can’t inspire much confidence in her general election viability:

Anderson’s plurality has continued to erode since initial results were posted yesterday evening, now down to 43.2%. Peters and O’Donnell appear to have perfectly split the opposition to Anderson, demonstrating once again that a solid majority of Republican voters remain convinced that not only should Trump still be President, but the issue needs to lead the Republican Party’s agenda. Were it not for Peters’ felony indictments, it’s quite likely that she would have consolidated enough support to win.

Where does all of this leave Pam Anderson? Even with the GOP’s nomination in hand, Anderson is a candidate without a constituency. There aren’t enough Republicans who agree with Anderson to provide a majority base of support, and in the general election there’s no reason for the majority of Coloradans who trust our election system to put a Republican in charge of it. The gripe about incumbent Secretary of State Jena Griswold is her supposed “partisanship,” which principally results from Griswold standing up to election misinformation from Republicans. What Pam Anderson herself should be doing if she believes what she says…most of the time.

Keeping an accused felon off the ticket is a very low bar.

What we still don’t see for Pam Anderson is a viable road to victory in November.