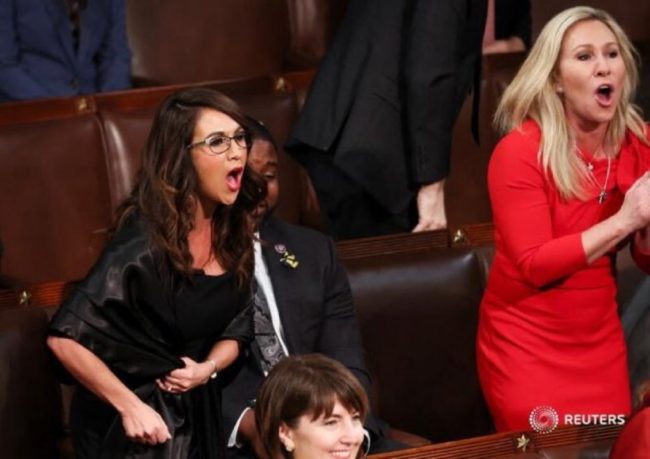 A fascinating story in Politico today describes what’s being characterized as a growing dispute between the two train-wreckiest freshman Republican members of Congress, Reps. Lauren Boebert of Colorado and Marjorie Taylor Greene of Georgia:

Marjorie Taylor Greene and Lauren Boebert look from the outside like MAGA twins, both loathed by Democrats for their incendiary right-wing rhetoric. But inside the House GOP, they’re not quite buddy-buddy.

Privately, Republicans say Boebert (R-Colo.) — who’s seen as more of a party team player than Greene — detests being tied to her Georgia colleague. And when the House Freedom Caucus board of directors gathered last month at its usual spot a few blocks from the Capitol, the two tangled over Greene’s appearance at a February event organized by a known white nationalist.

Their confrontation grew so heated that at least one onlooker feared the Greene-Boebert back-and-forth might escalate beyond the verbal cage match had another board member not stepped in to de-escalate, according to a GOP lawmaker who was granted anonymity to describe what happened…

The run-in last month between Greene and Boebert opened a new window into the internal dynamics between two of the group’s highest-profile members, each of whom has their own distinct persona within the party.

There’s little public-facing sign of a split between MTG and Boebert at this point, and joint antics like their widely-condemned heckling of President Joe Biden during the State of the Union address this year have linked the two figures firmly together. Despite this, as we’ve reported for over a year now throughout Boebert’s first term in office, MTG has consistently managed to earn more press coverage and more financial support than Boebert–the latter being a significant problem, since Boebert represents a district substantially more competitive than MTG’s.

Both Boebert and MTG rose independently to prominence, each benefiting from the scrambling of politics as usual by Donald Trump that tossed such quaint notions as “experience” and “qualifications” out the window. Neither owes the other anything for their respective rises to power, and it wouldn’t surprise us if Boebert imagined herself to be, as bizarre as it sounds, the more sophisticated of the two. But with Boebert on her own mission to push the bounds of decency at least one each news cycle, is MTG really the one giving the fringe a bad name? Or is this Boebert attempting to triangulate against the brand she helped build ahead of the June 28th primary?

When it comes to Congress’ greatest embarrassment, perhaps there can be only one.