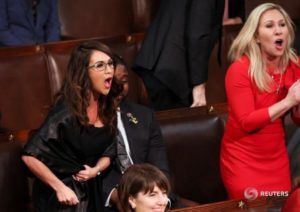 In case you missed it, Rep. Lauren “Q*Bert” Boebert and Rep. Marjorie Taylor Greene shouted at President Biden during the State of the Union speech on Tuesday — at the exact moment that Biden was talking about his son, Beau, an Iraq War veteran who died in 2015.

We waited a full news cycle to see which, if any, Colorado Republicans were going to comment on Boebert’s political theater performance; as it turns out, there wasn’t much to wait for. As far as we can tell, the sum total of the local GOP response to Boebert’s embarrassing antics was a both-sidery quote of disapproval from Rep. Ken Buck (R-Greeley) and an acknowledgment from State Rep. Matt Soper (R-Delta) that he didn’t mind a little racism so long as it was meant to offend Democrats.

No other Colorado Republicans would even pretend to say something, as South Carolina Sen. Lindsay Graham did on Tuesday.

Did Lindsey Graham mouth “oh shut up” after .@Laurenboebert called out Biden over the needless deaths of 13 Americans due to the hasty and poorly planned withdrawal from Afghanistan? Graham is a party-line DC warhawk who will always go along to get along. pic.twitter.com/tLX6QiQuYB

“Let me just say this, I agree with what Senator Lindsey Graham said: ‘Shut up.’ That’s what he said to them. I think they should just shut up.”

Here in Colorado there were plenty of Democrats speaking out about Boebert’s assholery, but only crickets from the likes of State Republican Party Chair Kristi Burton Brown (who did find time to comment on the SOTU — just not about Boebert).

Republican gubernatorial candidate Heidi Ganahl also commented on the SOTU, but did not mention Boebert; she was a guest on Mandy Connell’s show on KOA on Wednesday and the SOTU never came up (until the moment Ganahl left). This is pretty typical of Both-Sidey Heidi, who totally supports Boebert so long as the right person is asking. This was one of the many tweets that Ganahl deleted just before announcing her run for Governor last September:

This tweet from Heidi Ganahl has since been deleted.

Boebert has become the face of the Colorado Republican Party in large part because none of the adults in the room have stepped up to say something otherwise. Boebert’s antics on Tuesday hijacked the entire Republican response to the SOTU speech. Most Republicans just looked the other way.

Like Ganahl, Republicans pretend to love Boebert because they think their base wants them to love Boebert (and they are absolutely terrified of their base). They know the harm that Boebert is causing their brand, but they’re paralyzed in fear of losing support in a Primary Election if they raised their hand to object.

Remember this the next time you hear a Republican candidate in Colorado talk about how they would do a better job than Democrats of standing up to [Vladimir Putin/criminals/corporations/corruption/space aliens/etc.]. The GOP can’t even look its own bullies in the eye.