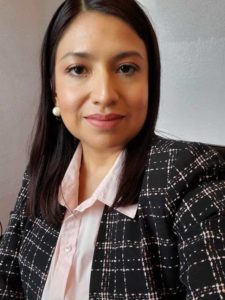 Sol Sandoval emerged as the only candidate on Tuesday night to qualify for the Democratic primary ballot in the 3rd Congressional District through the assembly process, securing her spot as the frontrunner to most likely face incumbent Rep. Lauren Boebert in the general election.

The Puebloan will be one of at least three candidates on the June 28 primary ballot hoping to secure the Democratic nomination. Sandoval, 38, has a decade of social work experience and also works in community organizing and activism. She has not previously held elective office…

“I have demonstrated to you that I know how to raise money, something that we are going to need to defeat Boebert,” she said before the vote. Sandoval said she has raised nearly $1 million so far, and that financial picture will become clearer following financial disclosures due later this month.

Sandoval received a solid plurality of delegate votes at the CD-3 assembly, enough to shut out two potential challengers who came reasonably close including serving state Rep. Don Valdez from making the ballot, as well as eliminate three other non-contenders. It’s a performance that sets Sandoval up positively for the June 28th primary, where she faces a novice candidate best known for his stomach-turning campaign launch video and a former Aspen city councilor who has plugged a huge amount of money into the race–while promising to remain focused on attacking the incumbent and not his primary opponents.

If this becomes a de facto two-way race as seems likely, Sandoval has important strengths in terms of grassroots appeal and close ties to the district’s largest Democratic population center in Pueblo. We’ve written before about the problems many of the early Democratic candidates have had in this race with financial management, but Sandoval has at least proven the ability to bring money in the door and that’s an important first step.

With Boebert’s own primary likely to attract a large number of unaffiliated voters who have a choice to participate in either party’s primary but not both, Sandoval’s progressive message seems well positioned for the Democratic base. Whoever wins the Democratic primary faces an uphill but not insurmountable challenge in this R+9 district, slightly redder than before the 2020 redistricting.

And remember, nobody knew who Lauren Boebert was once either.