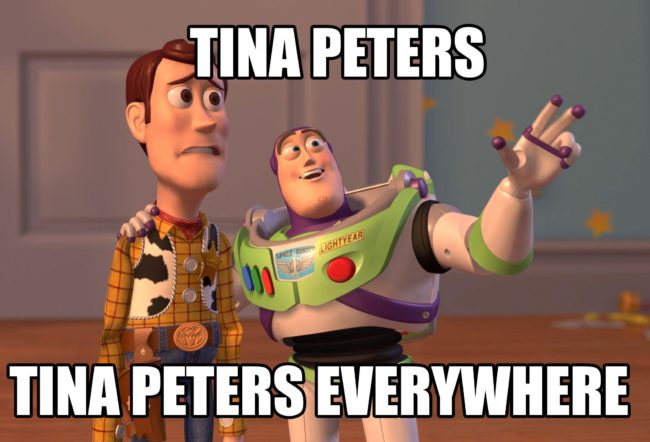 As the Colorado Sun’s political team reports in today’s Unaffiliated newsletter, indicted Mesa County Clerk and Republican Secretary of State candidate Tina Peters was everywhere over the weekend for Republican Party county assemblies across the state, receiving standing ovations that had to make Peters feel at least a little better about the crappy jail chow she was forced to eat for about 24 hours:

The Mesa County Clerk who faces felony charges for tampering with voting machines is now running for secretary of state, and was among several statewide contenders who stopped by the Castle View High School gym to woo the delegates.

About 400 people attended the event, many dressed in red, white and blue, some sporting signs or buttons for their favored candidates. Many of those candidates hosted tables, greeting delegates as they arrived, offering donuts, candy and other snacks as well as plenty of campaign literature.

But Peters got the biggest reception from the crowd, as she continued to reference her baseless claims of fraud in the 2020 election…

KJCT-TV Grand Junction reports that Clerk Peters is in Denver this week to testify/protest/otherwise rabblerouse against Senate Bill 22-153, legislation introduced to specifically address the kind of “insider threat” to election integrity Peters is accused of in her failed quest to prove that Donald Trump should still be President:

Peters was at the state capitol Monday and called the bill a power grab by Sec. Griswold.

“Senate Bill 153 should chill every citizen to the bone, because it is a blatant power grab by Secretary of State Jena Griswold,” said Peters. “Senate Bill 22-153 is clearly a knee-jerk response to elections investigations in Mesa County and the multiple damning reports that the investigation has produced.”

Alex Burness of the Denver Post reporting that Peters is at the Capitol again today to keep the protest against SB22-153 alive:

Tina Peters at the Colorado Capitol this morning, seen here with Sherronna Bishop. Inside the building there’s a group of election deniers protesting SB22-153. pic.twitter.com/wZECjVlK7c

Back in reality, where all of the “reports” compiled by pro-Trump conspiracy theorists working backward from their confirmation bias to back up Peters’ contentions have found no evidence of any actual attempt to alter any election results, and mostly evidence of their own lack of qualification to analyze the information allegedly stolen by Peters, we laugh–but it’s clear at this point that Peters is getting a very different and far more sympathetic reaction from the Republican Party faithful. Rather than hunkering down and focusing on the criminal case that could send Peters away for decades, she’s seeking protection in the loving arms of similarly deluded Trump supporters.

And in the short term, it just might work.

In our Get More Smarter interview aired yesterday with veteran political reporter Charles Ashby of the Grand Junction Sentinel, we talked about the possibility that Peters’ legal “persecution” could propel Peters in the current MAGA-addled world inhabited by Republican primary voters (starts at 00:30:07):

SILVERII: Do you care to conjecture or prognosticate on her chances of actually becoming the Republican nominee for Secretary of State?

BANE: However, I’m going to ask you this though. I think being indicted actually makes her the favorite in the Republican primary because because of how wacky the Republican base is right now?

ASHBY: You know, it definitely gives her some publicity, statewide publicity, [Pols emphasis] and depending on where you are on that issue you may like her more, you may hate her more, I mean who knows how that’s gonna work out.

Based on the poll numbers that show belief in the “Big Lie” underpinning Peters’ celebrity status has stubbornly dug in in the 14 months since Trump lost the 2020 presidential election among Republican base voters, there is a plausible scenario in which Peters could win the GOP state assembly contest on April 9th over “Never Trumper RINO” opponent Pam Anderson. Anderson is also awaiting approval of submitted petitions, but we expect them both to be on the June 28th ballot. From there, it’s in no small part a question of how (and how quickly) Peters’ criminal case proceeds. This race hasn’t attracted nearly as much attention as Lauren Boebert’s CD-3 primary against Sen. Don Coram, and with a clear alternative in the form of the Democratic incumbent SoS we don’t see a groundswell of unaffiliated support for Anderson to oppose Peters.

As long as Peters can avoid making a fool of herself enough to physically stay out of jail during her upcoming trial, and there’s no guarantees there as we know, her campaign could become a MAGA cause célèbre with a footprint beyond Mesa County or even Colorado. Peters winning the Republican primary in June would put Colorado Republicans on a collision course with reality in November, and wreck any chance the party may have had to “move on” from the Trump era that further weakened Republicans in this state. This is why Republican Party chair Kristi Burton Brown called for Peters to exit the race on the day of Peters’ indictment.

Today, Tina Peters is at the Capitol and Brown is facing her own calls to resign.

As surely as Peters is innocent until proven guilty, she’s free to contend for her party’s hearts and minds. The simple fact is that Republican leadership is afraid of Peters and the Republican grassroots voters who support her, just like they fear Donald Trump. It’s their base too, and Peters is the one giving MAGA voters (and Trump) what they want to hear.

The biggest problem Republicans have in Tina Peters is the one they can’t admit.