Denver7 updating the saga of Mesa County Clerk Tina Peters, indicted by a grand jury on multiple felony counts related to the theft of proprietary election system data in a failed attempt to provide evidence that the 2020 elections were stolen from Donald Trump–after a bond initially set at $500,000 payable in cash only Wednesday, Peters prevailed upon the judge in her case to reduce that to a much smaller amount:

A Mesa County judge set a $25,000 cash or surety bond for Tina Peters and ordered her not to have contact with her deputy clerk or any other members of her office, and not to leave the state without the court’s permission, after she was indicted by a grand jury on Wednesday.

Peters, the Mesa County clerk and recorder, was indicted on three counts of attempting to influence a public servant; one count of conspiracy to commit attempting to influence a public servant; criminal impersonation; conspiracy to commit criminal impersonation; identity theft; first-degree official misconduct; violation of duty; and failing to comply with the secretary of state.

Peters’ bond…was set at $25,000 as a cash or surety bond, but Judge Matthew Barrett ruled that it couldn’t come from a third party, such as MyPillow CEO Mike Lindell, who has offered to pay it.

“I note that the allegations in this case are very serious, they are allegations that go to the very heart of her employment, and are alleged to have been acts that undermine the democratic process,” Barrett said during their bond and advisement hearing Thursday afternoon.

The original very high bond set in the case after Clerk Peters turned herself in on Wednesday, which necessitated a night’s stay in Mesa County Jail for Peters and her deputy Belinda Knisley, was due to Peters’ bizarre disappearance for weeks after the story of the data theft and leak to far-right conspiracy theorists became national news. Peters eventually returned to the state in mid-September after hiding out in Texas on Mike Lindell’s alleged dime. We’re a little surprised to see it lowered as far as it was, and hope the judge doesn’t come to regret letting Peters out of jail ahead of trial.

And now comes the next question: will the judge allow Peters to travel the country spewing the “Big Lie” that got her in trouble to begin with? 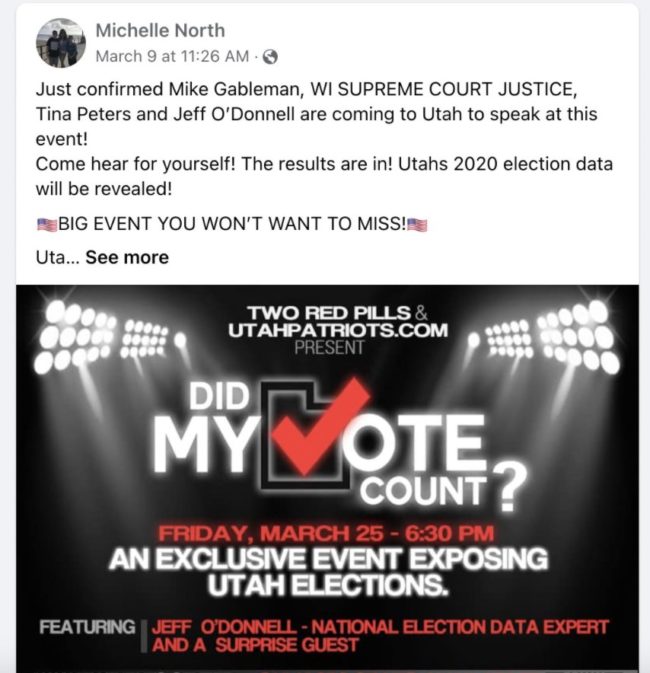 Two weeks from today, according to this announcement posted just before Peters turned herself in Wednesday, Clerk Peters is scheduled to appear in Utah with other election conspiracy theorists to do just that–subject at this point to the judge’s approval of course. On the one hand, Peters is innocent until proven guilty and also has the free speech right to say whatever she wants without infringing on the rights of others.

On the other hand, Peters’ own best interests, even if she or her lawyer the Saul Goodman of Colorado political law Scott “Honey Badger” Gessler don’t realize it, would definitely be served if she stopped talking. Additionally, there seems like a better-than-even chance that Peters might run into potential co-conspirators at that event, either in the state case or the ongoing federal investigation.

We could see impartial judge making a preventative call against all that on her behalf.

One thing’s for sure: pretrial life for an accused felon does not include all the privileges of innocence, even though one is presumed innocent until proven guilty in court. And as surely as an accused drunk has to stay sober before trial, Peters has to follow some very specific rules.

Or get comfortable in jail scrubs. There’s always that option.