For the second year in a row, GOP Rep. Stephanie Luck representing Otero along with portions of Fremont, and Pee-ebla Counties is the prime sponsor of legislation just introduced into the Colorado House that would require doctors to supply data on every abortion in Colorado to a new database set up by the state. Failure to make these reports would subject doctors and nurses to administrative sanction under the state’s malpractice statute. Rep. Luck is also the sponsor for a second straight year of a bill that would allow doctors to prescribe ivermectin and hydroxychloroquine for COVID patients, but we’ll save that for another blog post.

Because this year unlike last, Rep. Luck has a Senate sponsor for her anti-abortion measure–aspiring CD-8 candidate and state Sen. Barbara Kirkmeyer: 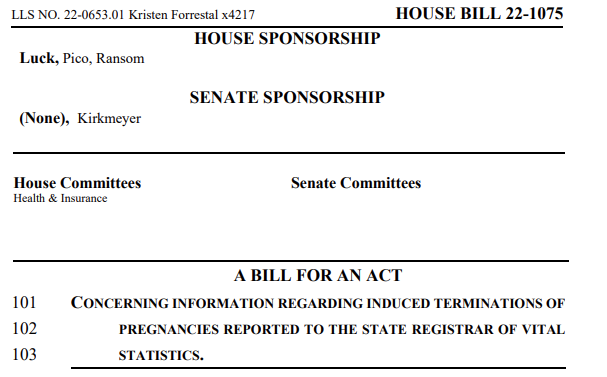 To be clear, this bill has approximately one-half snowball’s chance in Hell of passing the Democratic-dominated House and making it to the Senate. But what we have here is another opportunity for a candidate for higher office in the legislature to plant the flag on an issue near and dear to Republican primary voters–much like Reps. Ron Hanks and Dave Williams did yesterday during the debate over a voting rights resolution.

Kirkmeyer is competing against Thornton Mayor Jan Kulmann to be the GOP’s “corporate wing” opponent to hard-charging conservative Weld County Commissioner Lori Saine, the natural choice of the Republican grassroots and loudest supporter of ex-President Donald Trump. Although Kirkmeyer has a far-right record of her own to run on as one of the principal supporters of the ill-fated attempt by northeastern counties to secede from the rest of Colorado a few years ago, the tree of GOP primary victory must be watered with the blood dripping from chuncks of wedge-issue red meat.

Legislative grandstanding is a trick Lori Saine knows well, of course, and neither Saine nor Kulmann have it in their bag in 2022. If Kirkmeyer wants traction in this three-way race, she’ll milk that bully pulpit for all it’s worth.

All the while serving as a warning to general election voters, who in Colorado overwhelmingly support abortion rights and are more aware of the threat to abortion rights this year than perhaps ever before. But that’s a conversation for after June 28th.