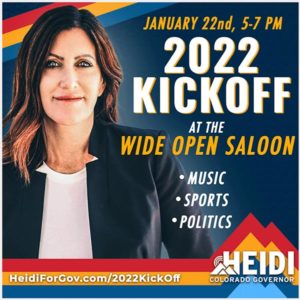 We’ve written over and over again in this space that Republican Heidi Ganahl is running the worst gubernatorial campaign in the entire country in 2022.

We’re not wrong, and here’s more proof: Ganahl is planning a big “2022 Kickoff” for her campaign…nevermind that she already did that back in September.

As we wrote last month, Ganahl’s September 2021 kickoff was legitimately one of the saddest statewide campaign launches that we’ve ever seen. She completely botched efforts at building even a modicum of suspense; presented herself as a bumbling idiot in multiple media interviews; didn’t even bother to offer even a basic platform of ideas; and ended up cutting a planned two-week launch tour in half because nobody was showing up to any of her events. Fellow Republicans were publicly stating that her campaign was a disaster before it was even a month old.

We can’t blame Ganahl for WANTING a do-over for her campaign, but that’s not how any of this works. You can’t just shake the old Etch-a-Sketch and start again; ask 2018 Republican gubernatorial candidate Walker Stapleton how well that worked out. Or Mitt Romney, circa 2012.

Ganahl’s re-kickoff campaign reminds us of this spoof trailer from the “Back to the Future” trilogy of movies teasing a future “Jaws 19” with the tagline, “This time, it’s really, really personal.” Perhaps Ganahl will follow a similar formula and “kick off” her 2022 campaign once a month for the rest of the year.