Welcome to the halfway point between one of Rep. Lauren Boebert’s birthdays. Let’s Get More Smarter. If you think we missed something important, please include the link in the comments below (here’s a good example). If you are more of an audio learner, check out The Get More Smarter Podcast. And don’t forget to find us on Facebook and Twitter.

► Scientists are racing to understand the true threat of the Omicron variant of COVID-19 as cases of infection are rising around the world. As David Leonhardt writes for The New York Times, it is red America that should be most worried about the spread:

In the U.S., partisanship is the biggest factor determining vaccination rates. If Democratic voters made up their own country, it would be one of the world’s most vaccinated, with more than 91 percent of adults having received at least one shot. Only about 60 percent of Republican adults have done so.

This vaccination gap has created a huge gap in death rates, one that has grown sharply during the second half of the year.

One telling detail is that Covid deaths in both swing counties and heavily Biden counties have not risen over the past two months, even as nationwide case numbers have surged. In heavily vaccinated communities, rising caseloads don’t automatically lead to rising death tolls.

In hundreds of U.S. counties, though, most adults still have not received a Covid vaccine shot. “Just since this summer, 150,000 unvaccinated Americans have needlessly lost their lives despite the widespread availability of vaccines,” Dr. Peter Hotez of the Baylor College of Medicine, in Houston, said yesterday.

The difference in COVID-19 survival rates between Blue and Red parts of the country has been evident for awhile now, but the data is still astonishing.

The difference in death rates from COVID between Republicans and Democrats is becoming even more striking. pic.twitter.com/e1gvgwIY4M

Here’s another reason why you should ignore right-wing narratives pushing back against COVID-19 precautions.

The Trump administration deliberately undermined the nation’s coronavirus response for political purposes, including by weakening testing guidance and championing widespread “herd immunity,” according to a new report from the House panel investigating the pandemic response.

The Democratic staff report released Friday was a summation of the year’s work investigating political interference in the pandemic response from Trump officials and the former president himself.

In interviews with officials and from uncovered emails and other documents, the committee found that the former administration failed to heed warnings about supply shortages, blocked public health officials from speaking publicly and neglected the pandemic response in order to focus on the 2020 presidential election and on promoting the lie that the election was “stolen” from Trump through widespread fraud.

► Colorado Gov. Jared Polis is warning that the Omicron variant of COVID-19 will soon become the dominant strain of the virus in Colorado. Good thing there is a FREAKING VACCINE YOU CAN TAKE. You are 47 times less likely to be hospitalized by COVID-19 in Colorado if you get vaccinated.

► Senate Democrats continue working on efforts to pass some sort of major election reform legislation, if West Virginia Sen. Joe Manchin will let them do it.

► A judge rejected a request by lawyers for Fox News to dismiss a defamation lawsuit from Colorado-based Dominion Voting Services.

► The Governor’s Office of State Planning and Budgeting (OSPB) released its quarterly economic forecast today. You can read the details here.

► How many of these headlines must be printed before we get serious about Climate Change?

► Colorado Attorney General Phil Weiser is pushing for more resources to fight back against rising cases of fentanyl overdoses. As 9News explains:

Weiser said he will work with state legislators and law enforcement officials during the next legislative session in legislation to better combat fentanyl, including more resources for law enforcement.

The additional resources would be used to investigate fentanyl trafficking rings, disrupt drug supply chains through multijurisdictional task forces and educate the public in an effort to prevent accidental overdoses, according to Weiser.

“Dealers selling counterfeit pills with fentanyl in our communities are peddling substances that can kill,” Weiser said. “The legislature should increase penalties for those that deliberately handoff fentanyl and fentanyl-laced drugs to unsuspecting users, resulting in accidental overdoses. Four grams of fentanyl is not the same as four grams of cocaine or any other illegal drug. The legislature should re-evaluate whether a felony charge is appropriate for possessing this amount of fentanyl.”

► The Colorado Times Recorder reports on a joint fundraiser in Colorado Springs in which Republican candidates dedicated to the “Big Lie” got together to trade conspiracy theories and see Senate candidate Ron Hanks dressed up like the Crocodile Hunter. 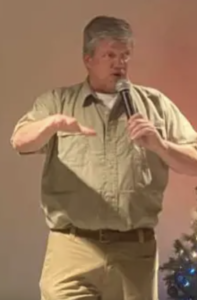 ► The Ft. Collins Coloradoan reports on some ridiculous non-leadership for Weld County schools:

The Weld RE-4 school board governing Windsor and Severance schools revisited mandatory masking at a special meeting Wednesday night, deciding to wait until it has a full board to make a decision regarding the existing mandate.

New board member Aaron Smith introduced a resolution to make the masks optional, but the board ultimately decided the new interim superintendent and new board member — both set to begin in early January — should have a say in the decision and they needed more time with the resolution.

Board president Russ Smart said he hopes to have a decision regarding masks on Jan. 10; students are returning to the classroom from winter break on Jan. 4.

► Colorado is working on refilling the coffers of its unemployment fund, as The Colorado Sun explains.

The Colorado Transportation Commission on Thursday approved a new rule that could divert billions of dollars to clean transportation projects in the coming decades.

The rule will require the state Department of Transportation and the state’s five metropolitan planning organizations to measure the climate impact of planned projects and offset them if they exceed a given amount. Transportation-related emissions now make up the largest source of climate pollutants in Colorado.

State officials estimate the rule could shift some $6.7 billion by 2050 toward public transit, pedestrian and bicycle infrastructure, construction emission reduction, and other environmentally friendly strategies. They also hope it will incentivize local governments toward more efficient land use, with denser housing and commercial developments that require less travel.

Members of the commission said the rule is an important step to address climate change — and a difficult one because state transportation agencies have historically been singularly focused on building and maintaining roads.

► Colorado is finally getting more mountain snowpack, but it’s not nearly enough to start moving the state out of extreme drought conditions.

► If you can manage to find an open parking meter in Denver next year, you’ll pay a lot more for the privilege.

► The surest way to piss off former President Donald Trump is to question the beauty of his hairdo.

Trump: “evangelical Christians love Israel more than the Jews” in the US

“it used to be that Israel had absolute power over Congress”

► Yeah, let’s make HER the Governor.

► Keep an eye on Wisconsin, where continued efforts to prove that the 2020 election was fraudulent are being steered by people who are not exactly independent.

► This week on The Get More Smarter Podcast, hosts Jason Bane and Ian Silverii predict the future…or at least the part involving the 2022 election in Colorado.