Durango Herald: Boebert is an Embarrassment

THURSDAY UPDATE: As predicted below, Boebert is is playing the victim in response:

UPDATE: The publisher of the Montrose Daily Press and the Delta County Independent also recently called for Boebert’s ouster in 2022.

The Durango Herald today published one of the more scathing editorials about a local politician that we’ve ever seen in our time observing Colorado politics. The editorial board of the Herald has apparently had their fill of Congressperson Lauren “Q*Bert” Boebert:

In the 2022 election, Colorado Republicans and Democrats should do their best to replace Rep. Lauren Boebert, R-Rifle. The woman is an embarrassment – to her district and her party. [Pols emphasis]

She is an ineffective representative, offensive to everything Democrats value and a political threat to the GOP. (When the voters tire of her act, which they will, it could cost the Republicans a seat in the narrowly divided House.) Those facts should encourage all involved to be done with her.

Since winning the office in 2020, Boebert has ostensibly represented Colorado’s 3rd Congressional District, which includes Durango and much of Western Colorado. But rather than directing her energy toward working on behalf of her district she has focused on what amounts to her extended middle finger. That does not get anything done. 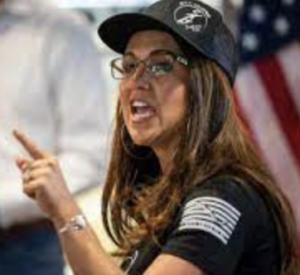 Those are strong words, but the editorial is just getting started:

…More to the point, what is going on here is not governing. Boebert is supposed to be representing the interests of her district. Instead, she has played to a portion of the electorate that seems to see democracy as some sort of circus act…

…Boebert seems to think acting the fool is her job description. And, unless representative government is seen as akin to one of those talk-show screaming matches, Boebert is not representing Western Colorado. Nor does she seem interested in doing so. Enough is enough. [Pols emphasis]

We’ve wondered for some time in this space about how long Boebert would be able to get away with her carnival barker approach to politics before her constituents started to get sick of the act and start seeking out actual “representation.” If Boebert is removed from her committee assignments in response to her anti-Muslim rhetoric, the freshman from Rifle will have a difficult time answering the basic question, “So, what is it that you actually DO here?”

Keep in mind that The Durango Herald is not traditionally a bastion of liberal thought. In the 2018 election cycle, the Herald endorsed several Republicans for top offices in Colorado, including George Brauchler for Attorney General, Wayne Williams for Secretary of State, and Walker Stapleton for Governor. No newspaper that endorsed Walker-freaking-Stapleton can be labeled a lefty rag.

Boebert is unlikely to change her ways based on one editorial from The Durango Herald, but she should at least be concerned by what was published today. We seem to have reached a tipping point in which media outlets have tired of Boebert’s divisive (and largely pointless) incendiary rhetoric. Even Boebert’s fellow Republican colleagues are dismissing her as a silly performance artist.

Boebert will undoubtedly respond to today’s editorial with over-the-top feigned indignity. She’ll play the victim and claim that the “media elites” are out to get her. This is what she does. This is ALL she does.

And that, dear friends, is precisely the point.