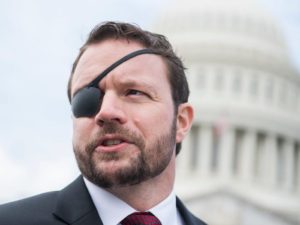 As the Washington Post’s Mariana Alfaro reports, conservative Republican Rep. Dan Crenshaw of Texas, considered a bridge between the Republican Party’s corporate and far-right ideological wings, lashed out over the weekend against Rep. Lauren Boebert’s House Freedom Caucus in exasperation over, Crenshaw’s words, “Lie after lie after lie.”

“Lie after lie after lie, because they know something psychologically about the conservative heart: We’re worried about what people are going to do to us, what they’re going to infringe upon us — that’s the nature of conservatism,” Crenshaw said during the event, which was hosted by the Texas Liberty Alliance PAC.

Crenshaw said his criticism was directed at “everybody in the Freedom Caucus — all of them,” and did not single out any specific GOP lawmaker. Members of the caucus include Reps. Mo Brooks (Ala.), who is running for the Senate; Matt Gaetz (Fla.), Louie Gohmert (Tex.), Paul A. Gosar (Ariz.), and Marjorie Taylor Greene (Ga.)…

Crenshaw, a former Navy SEAL, accused members of the caucus of not voting for many items in Trump’s agenda when he was in office. Instead, Crenshaw said, it was Rep. Adam Kinzinger (R-Ill.) who voted more often for Trump’s conservative measures. Kinzinger, Crenshaw noted, voted with Trump “almost 99 percent” of the time.

There’s a lot to unpack here so let’s start from the top: Rep. Adam Kinzinger, who has announced he will not seek re-election in 2022, is only slightly less reviled by the Trump loyalist Republican base than Rep. Liz Cheney herself. It was widely expected that had Kinzinger not announced his intention to retire he would be staring down a fierce primary challenge much like Rep. Cheney.

Crenshaw’s slam on the Freedom Caucus, to which freshman Rep. Lauren “Q*Bert” Boebert was recently elected to the Board, is particularly interesting in that it highlights the fact that members of the caucus were not particularly inclined to vote ex-President Donald Trump’s preference while Trump was in office. That makes it harder for Trump loyalists to clap back at Crenshaw–which if we were them we wouldn’t do anyway, since Crenshaw is quite popular both in his district and in the Republican caucus.

And although Rep. Boebert wasn’t in office with Trump, the rest of Crenshaw’s criticism of the Freedom Caucus most certainly applies to Boebert word for word:

Crenshaw can’t admit it, but this apt description of the Freedom Caucus’ antics goes right to the top of his party. Crenshaw is slamming Boebert and the Freedom Caucus today from the point of view of a movement conservative, but in the process he’s revealing the disconnect which has arisen between support for the conservative agenda and support for Donald Trump personally.

The latter no longer requires the former, and it’s fellow conservatives who should be most worried by that.