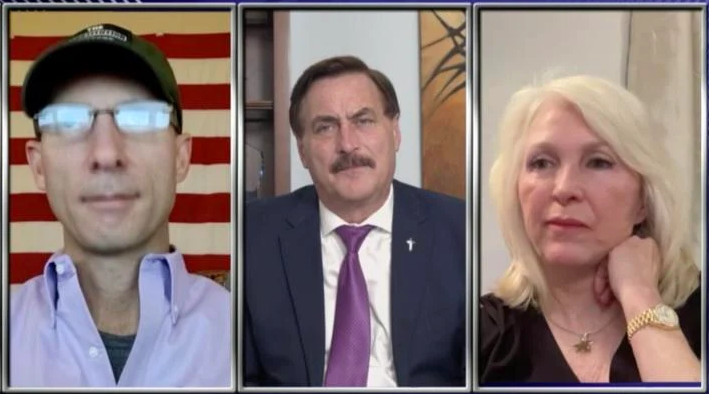 As the Grand Junction Sentinel’s Charles Ashby reports, yesterday was a big day in the joint local and federal criminal investigation against Mesa County Clerk Tina Peters, suspected of presiding over a serious breach of election system security and subsequent leak of proprietary data in a half-baked and (let us be redundantly clear) failed attempt to prove the 2020 election was stolen from Donald Trump:

While Mesa County District Attorney Dan Rubinstein said state and federal laws bar him from disclosing details about the searches, he said the warrants, which he called “federally authorized operations,” were executed sometime Tuesday morning.

Although authorities are characteristically tight-lipped as their investigation continues, Clerk Peters rushed once again into the arms of “MyPillow Guy” Mike Lindell to complain about the horrors of being the subject of a lawfully-executed search warrant:

On Lindell’s internet TV blog late Tuesday, Peters responded to the “raids,” continuing to defend her actions, asking for more donations to a legal defense fund that she and others have created to help defend her against any pending criminal charges.

Although it is not known on whom the operations were conducted, Peters, her deputy, Belinda Knisley, and one of her elections managers, Sandra Brown, have been implicated in possible wrongdoings involving numerous counts of election security breaches, all of which could lead to state and federal felony charges and possible time in prison.

We’re watching for more information on all of the individuals who may have had search warrants executed on them yesterday, including Rep. Lauren Boebert’s former campaign manager Sherronna Bishop and a mysterious rando named Gerald Wood who we can’t help but notice bears more than a passing resemblance to D.B. Cooper (see photo top). Since the revelation that Peters had either herself stolen or facilitated the theft and subsequent leak of data from Dominion Voting Systems machines in her custody, Peters and the Trump dead-enders who immediately took her in as a heroic figure have made no real attempt to deny the allegations–simply arguing they were justified by a larger obligation to “election integrity” that somehow trumped (pun intended) Peters’ obligation to obey the law.

Except, as we know now with certainty months after the data was stolen, leaked, and found to contain no evidence to substantiate any of the baseless contentions made in the wake of last November’s elections about Dominion Voting Systems, there’s no “whistleblower” justification for anything Peters did. The breach of security in Peters’ office that exposed the entire operating system of a Dominion computer to public scrutiny was the only crime committed. In fact, the security risk created by exposing this data publicly is likely to result in actual attempts at election tampering in the future. Dominion at the very least will be forced to spend a lot of money to prevent that.

As we’re seeing in the civil suit alleging defamation against Trump lawyers and right-wing media figures who platformed and repeated local crank Joe Oltmann’s fictional story of a call by a Dominion employee promising to steal the election, the defense that would naturally work best–that anything alleged was actually true–is dead on arrival once the judicial system becomes the forum. Tina Peters’s discredited conspiracy theories simply carry no weight with criminal investigators, prosecutors, and judges who know better.

Agitating the faithful through uncritical venues like “Lindell TV” is all Peters has now, and that won’t help Peters once the search warrants become arrest warrants.