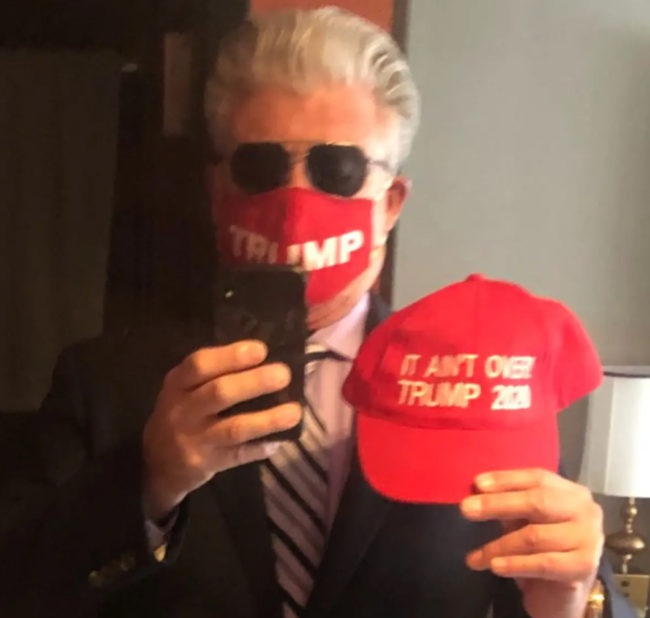 The new lawsuit alleges Corporon and Denver-based 710 KNUS “elevated Dr. Coomer into the national spotlight, invaded his privacy, threatened his security, and fundamentally defamed his reputation through a relentless election fraud campaign.”

710 KNUS is not Denver’s highest-rated AM radio station, but in recent years the station has become by far the most overtly far-right political of Denver’s slowly declining community of once-legendary talk radio outlets. Scandal at KNUS has been at a steady boil for some years now after a producer at the station was fired in 2019 after being exposed as a straight-up Hitler-adoring Nazi in his spare time. The firing of Steffan Tubbs’ producer took place just after another host was fired for daring to criticize then-President Donald Trump and yet another host got fired for wishing for a “nice school shooting” to distract from Trump impeachment news then dominating the headlines.

Despite all of these very good incentives for Republicans who don’t want to be associated with far-right extremism in order to preserve their electability with the general nonradicalized public to stay away, KNUS remains a regular friendly forum for Colorado Republicans to directly connect with some of their most ardent supporters–and for some reason escape the stigma associated with legitimizing a forum for repulsive cranks and literal Nazis.

Or in this case, a chief proponent of the “Big Lie” that the 2020 election was stolen. 9NEWS:

The lawsuit also said Salem Media and its hosts were “enthusiastic and consistent” pushers of voter fraud claims, though they did not provide evidence.

Coomer’s attorneys name several hosts in the suit. They include Corporon, who is Colorado’s Republican National committeeman, Peter Boyles, Deborah Flora, who is running for Colorado’s U.S. Senate seat in 2022, and George Brauchler, the former district attorney in the 18th Judicial District who is a legal analyst for 9NEWS. Corporon is the only individual named as a defendant.

As we’ve seen in previous court action on Eric Coomer’s quest to hold the principal agents of the “Big Lie” accountable for driving him into hiding and severely damaging his and his company’s reputation, don’t look for Randy Corporon or anyone else named above to defend the substance of their previous claims about the 2020 elections. Despite all the talk radio bravado from Corporon, they’re past that now. Corporon apparently doesn’t mind being in court or at least threatening to go to court, since he’s representing leading coup planner John Eastman’s threat to sue the University of Colorado–which hasn’t gone anywhere yet. But once in court, these defendants seek only to prove they didn’t maliciously invent the “Big Lie”–not that the “Big Lie” was actually true.

The massive disconnect between the bubble of “Big Lie” believers and everyone else, to include the inhabitants of every courtroom in America, cannot be reconciled without the Randy Corporons of the world finally admitting what they seem only willing to imply in court to save their own asses: and none of these lies are true, that Donald Trump lost the 2020 elections, and the assault on the democratic process that ensued from Trump’s refusal to accept the result is one of the greatest crimes ever perpetrated against American democracy.

Which would make Coomer’s charge of defamation true, but also by far the lesser crime.

Like the Scopes Monkey Trial itself, much more than defamation is in the balance.