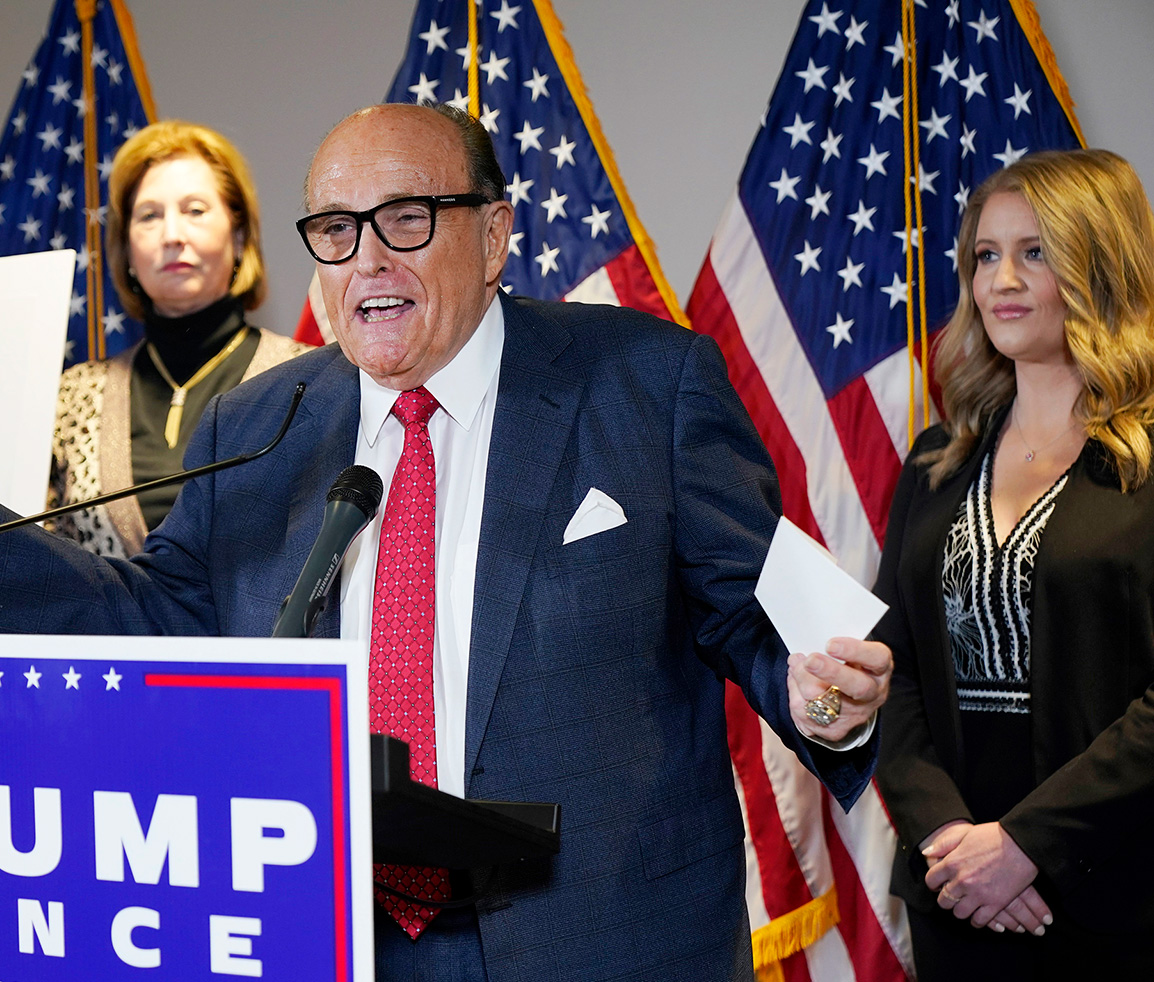 This week, some of the biggest names from ex-President Donald Trump’s failed legal campaign to overturn the results of the 2020 election are defending themselves in Denver District Court from a defamation lawsuit filed by Eric Coomer–a former employee of Denver-based Dominion Voting Systems baselessly accused by a local election conspiracy theorist of plotting with Antifa to somehow alter vote totals.

On the strength of this sole unsupported allegation from far-right activist group FEC United founder Joe Oltmann, Trump and his allies seized on Dominion as the as-yet unknown factor that somehow engineered Trump’s defeat–resulting in death threats against Coomer that forced him into hiding, and a persistent baseless conspiracy theory that motivated a criminal breach of election system security in Mesa County in a fruitless attempt to prove Dominion voting machines were in some way compromised.

The question in this defamation case, however, is much narrower as 9NEWS’ Marshall Zelinger explains:

To win a defamation case, Coomer must prove “actual malice.” However, Coomer does not have to prove The “Big Lie” was a big lie.

The Colorado Sun’s Daniel Ducassi reports on the attempt by defendants in this case to pull the plug under Colorado’s novel anti-SLAPP (strategic lawsuit against public participation) statute:

Defendants in the defamation case — including Rudy Giuliani, Powell, One American News Network and the Trump campaign itself — jockeyed to persuade Judge Marie Avery Moses to dismiss the lawsuit under Colorado’s anti-SLAPP law, which is meant to protect journalists and members of the public from being targeted by frivolous, retaliatory lawsuits aimed at stifling free speech.

The focus of the case is on claims made by conservative Colorado-based media figure Joe Oltmann that he infiltrated an antifa conference call in which Coomer allegedly stated that he had made sure Trump wouldn’t win the election. Conservative media outlets including One American News Network publicized Oltmann’s claims, which Trump-associated lawyers like Rudy Giuliani and Powell pushed in post-election news conferences to sow doubt about the integrity of the election.

What has been laid out very clearly in these first couple of days of testimony is the central role of FEC United founder Joe Oltmann in originating the entire nationwide conspiracy theory targeting Dominion Voting Systems. As our readers know from recent events in Mesa County, the damage done to Dominion’s reputation, however baseless, is enormous. But here’s the unsatisfying rub for those hoping for drama in the courtroom: Oltmann is making no attempt to prove his core contention that Coomer actually participated in a phone call where he said the things Oltmann alleged. John Frank at Axios:

Oltmann’s attorney argued in court that it didn’t matter if Coomer was on the call, but whether it was made with a reckless disregard for the truth. An attorney for Giuliani claimed the former New York mayor was just repeating what was in the news from Oltmann and spread by conservative Colorado commentator Michelle Malkin.

In the end, say all of these high-profile “Big Lie” promoters, it all comes back to Joe Oltmann–and as Ducassi at the Sun continues, the picture Oltmann’s own lawyers are painting despite Oltmann’s daily social media antics of Oltmann is more pitiable than culpable, conceding that he might indeed, as Coomer’s legal team suggests, be “delusional.”

Oltmann’s attorney, Ingrid DeFranco said Coomer’s team painted her client as a man with “an obsession, perhaps a delusional obsession.” If so, she argued, then Oltmann “could not possibly have entertained grave doubts about the truth,” and therefore can’t be liable for defamation. [Pols emphasis]

The most important takeaway from the court action in this case so far has little to do with whether Eric Coomer can make his legally challenging defamation case stick–proving that in addition to spreading a falsehood, the falsehood was spread maliciously toward Coomer. What matters more is that from Rudy Giuliani on down the line, none of these defendants are trying to prove that the “Big Lie” at the heart of this case is true. Truth, after all, is the strongest defense against the charge of defamation there is.

That should be the headline of every story about this trial.