After relistening to the meeting, the reference Scott McInnis made about a phone call from Tina Peters was a call from last year, when he said she was supportive of Wayne Williams overseeing her recall election (which didn't collect enough signatures to happen). #copolitics 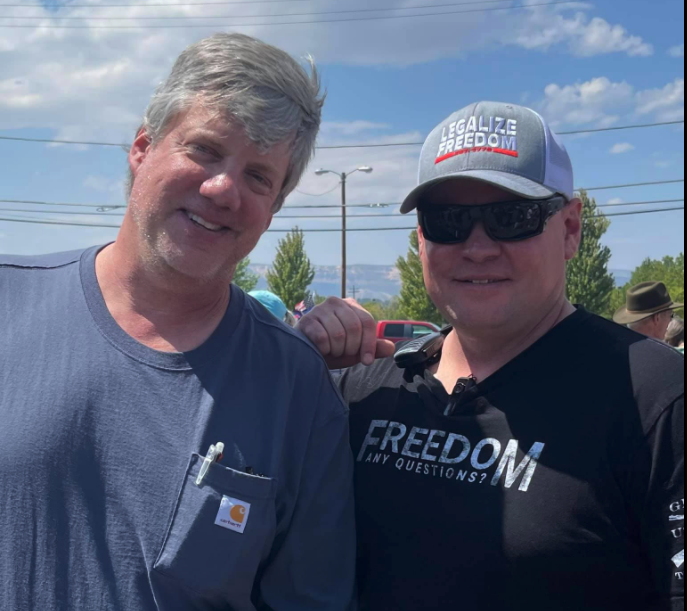 Veteran Western Slope journalist Nancy Lofholm reports for the Colorado Sun from Grand Junction, where this past weekend hundreds of far-right supporters of embattled and presently holed-up Mesa County Clerk Tina Peters turned out to show their love–and their unshakable belief that the 2020 presidential election was stolen from Donald Trump:

“Our hero, Tina,” as some of her conservative constituents refer to her, was the absent star of a rally organized in her honor by a group called Mesa County Concerned Citizens. She is in hiding because of what some of her supporters say, without evidence, are threats against her life.

Peters has been incommunicado with the media and away from her office since Tuesday, when she was a featured speaker at a Sioux Falls, South Dakota, cyber symposium hosted by MyPillow CEO, Trump supporter and election fraud conspiracist Mike Lindell. Lindell had promised that he would disclose evidence at that symposium that the 2020 election was rigged. No such evidence was presented by Peters or any other speakers.

Leading the faithful at Saturday’s rally for Clerk Peters was the freshman state representative who seems to be everywhere sedition wants to be–Rep. “Raging” Ron Hanks of Fremont County:

Republican state Rep. Ron Hanks, of Penrose, an outspoken Peters supporter, spoke at the rally, calling the clerk a “gold star mom and public servant.” Peters’ son, Remington Peters, a Navy SEAL, died in 2017 when his parachute malfunctioned during an airborne demonstration in New York.

“There is no evidence she did anything wrong,” Hanks said to loud applause.

Hanks asserted, “evidence is mounting daily” that Griswold’s “raid” on Peters’ office was a “false-flag operation” [Pols emphasis] and a way for Griswold to “divert attention from her own derelict criminal actions.”

It’s not like Rep. Hanks has a track record of factual statements that should give him any credibility whatsoever, but let’s be clear: facilitating a breach of security to allow the theft and eventual public distribution of proprietary election system data is a crime, and that is why everyone from the local DA to the FBI is investigating.

But it’s not like it’s necessary to take Hanks’ word. As Colorado Public Radio reports, at least one speaker at this rally readily admitted, even celebrated the crime Clerk Peters is under investigation for:

“One thing you have heard about Tina Peters is true,” said Cory Anderson, who heads the local chapter of the Election Integrity Project, which has been trying to use voter canvassing to prove fraud. “There was a before and after image taken of the Dominion system in clerk Peter’s office. [Pols emphasis] I think we’ll be very glad that happened. Preserving the truth is important to discovering the truth.”

We don’t know if Clerk Peters has retained a criminal defense attorney yet in this case, but if she has that attorney should be aghast at these idiots in essence blaring Peters’ conviction into a megaphone. The data that Peters allegedly stole has already been “analyzed” by crack and quack researchers alike who gave “MyPillow Guy” Mike Lindell one final chance to prove his theories about the 2020 elections at Lindell’s “Cyber Symposium” earlier this month–and other than Peters herself rushing the stage in a too-late attempt to cover her ass, absolutely nothing nefarious emerged.

In short, the “defense” offered up for the crime Cory Anderson just confessed to on Clerk Peters’ behalf is a conspiracy the data she helped steal doesn’t support. It’s a “whistleblower” too clueless to realize she is sounding a false alarm. Which means it’s not a defense at all, just that usual bit of deranged nonsense a guilty person blurts out before the judge gavels them into silence at their initial hearing.

Great job, freedom fighters! This is certain to end well for all concerned.