Mesa County Clerk Tina Peters promised My Pillow's Mike Lindell that she'd be back for Day 3 on Thursday with some unspecified information. Last night, Peters presented no evidence of wrongdoing by Dominion or others.

We’ll update. Maybe. It had better be good.

Yesterday’s Colorado political news headlines were dominated by an investigation ordered by Secretary of State Jena Griswold’s into an alleged serious breach of election systems security in Mesa County, in which passwords to access Dominion Voting Systems workstations was leaked and eventually wound up posted to a right-wing blog falsely claiming they could be used to remotely log into (and therefore tamper with) election systems.

Republican Mesa County Clerk Tina Peters, who has previously made bizarre and unfounded claims about elections systems in support of ex-President Donald Trump’s contention the election was stolen despite having certified her own county’s results last November with no issues, issued a statement in response to Secretary of State Griswold’s demand for record that vaguely suggested she was involved in this breach–saying “The citizens of Mesa County have been critical of election integrity” and “I will do everything in my power to protect their vote.” Whether Peters’ vow to “protect their vote” was by finding out how this breach occurred or facilitating the breach was left unclear.

Mesa County Clerk Tina Peters made a surprise appearance at Mike Lindell’s symposium Tuesday, an event that purports to be looking into allegation that the 2020 president election was rigged. She said state officials were “raiding” her office while she was in flight to the South Dakota event.

Peters, who faces possible criminal charges for security breaches, told the symposium audience that whoever entered her office in Grand Junction Tuesday could have accessed whatever they wanted, and implied that they were planting false evidence.

Peters was the featured speaker at Lindell’s symposium, [Pols emphasis] an event that the My Pillow company and fervent supporter of former President Donald Trump promised would provide a smoking gun to prove that the election was rigged, regardless of a massive amount of evidence to the contrary. 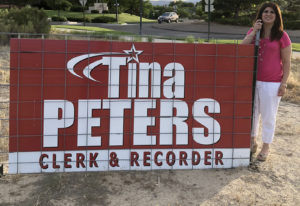 Heidi Beedle of the Colorado Springs Independent reported via Twitter that at least two additional Colorado-based “Big Lie” peddlers of note traveled to South Dakota to appear at “MyPillow Guy” Mike Lindell’s “Cyber Symposium” with Clerk Peters: including “Insurrectionist Man of Mystery” freshman GOP Rep. Ron Hanks and Sherrona Bishop, a close associate of Rep. Lauren Boebert. As the Washington Post’s Joseph Marks reports this morning, no evidence of election fraud is emerging from Lindell’s so-called “symposium” despite Lindell’s insistence that a bombshell was forthcoming:

MyPillow CEO Mike Lindell yesterday kicked off a “cyber symposium” that promised digital proof of his outlandish claims the 2020 election was hacked.

But by the end of the first day, all he’d provided was a smattering of data that amounted to nothing, according to experts in attendance…

“This is a big fat nothing and a distraction,” Harri Hursti, a longtime election security expert who attended the conference to fact check any technical evidence, told me. Hursti is among the most prominent critics of voting machine security but has slammed election-fraud claims by Donald Trump and his supporters for lacking any hard evidence.

…Lindell began the day claiming the conference itself was the victim of hacking. Throughout the lengthy day, he alleged bombshell evidence would soon arrive that never materialized. [Pols emphasis]

Was Clerk Peters the “bombshell” Mike Lindell promised? If so, she failed to deliver the goods. This nonetheless represents a major escalation by the “Big Lie” conspiracy theorists in Colorado, who are now rallying around Peters despite no evidence Peters has done anything other than commit a crime, and capitalizing on her situation to win face time with Mike Lindell. But make no mistake, nothing Peters is doing here will help her in a potential criminal defense, which it looks like she’s going to need:

Mesa County District Attorney Dan Rubinstein has launched a criminal investigation. He said he hasn’t spoken to Tina Peters, the Clerk and Recorder for Mesa County, in quite some time.

Politically, this escalating scandal could become a debacle for Colorado Republicans looking to take back statewide offices in 2022. Former Mesa County Commissioner Rose Pugliese, a longtime ally of Clerk Peters (photo above right), faces tough questions about Peters (and the 2020 elections in general) that could be enough to dissuade her from running for Secretary of State–or render her unelectable if she does run.

As we’ve said repeatedly, it’s hubris for Colorado Republicans to participate in this baseless relitigation of the 2020 elections. Colorado, with our proven record of secure and accessible elections overwhelmingly trusted by the voting public, is the wrong battlefield for “Big Lie” dead-enders. If the obsession with second-guessing 2020 becomes the face of the Colorado GOP in 2022, a third consecutive disaster awaits them at the polls.

As for “MyPillow Guy,” hopefully he holds on to enough of his money to help Clerk Peters make bail.