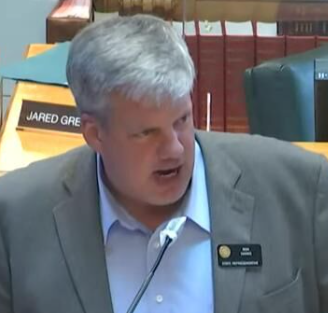 Reporter Heidi Beedle of the Colorado Springs Independent has a feature-length story out today on two Colorado Republican state representatives, Reps. Dave Williams of Colorado Springs and Ron Hanks from an undisclosed location in Fremont County, who have fully embraced the “Big Lie” that the 2020 election was stolen from Donald Trump despite a lack of any credible evidence this occurred.

As readers know, Rep. Hanks attended the January 6th “Rally To Save America” that degenerated into the insurrection at the U.S. Capitol, and has now admitted to being inside police lines while somehow still pretending that it was Antifa doing the rioting. A few days before Joe Biden took office, Hanks still held out hope that foreign intelligence services would swoop in with proof the election was stolen. Nonetheless during the legislative session this year, Hanks objected to being labeled a “conspiracy theorist” during debate over DOA Republican bills to suppress and second-guess the vote.

But as Beedle reports for the Indy, on July 17th at a town hall in Colorado Springs hosted by Rep. Williams, Rep. Hanks earned the label with interest:

Hanks MADE claims about election fraud THAT were both grandiose — stating that there were “well over 100,000 incidents of irregularities” in Maricopa County — and vague. He prefaced his claims with words like “hypothetically,” “conceptually” and “theoretically.” He suggested that Runbeck, an Arizona company that prints ballots, could possibly be reusing returned ballots to sway the election. “Here’s a hypothetical for you — and it has been asked — what happens to the ballots that are sent to an address but that person doesn’t live there anymore and the Postal Service, through some grace, returns it?” he asked. “It’s going to go back to the sender, and the sender is Runbeck, and there’s some questions about what they’re doing. What do they do with those ballots? Do they fill them out? Put them in a drop box that makes it rather easy to spread the extra votes? That’s a concern we have. They did 30 million [ballots], and on top of that there’s the 168,000 paper ballots on the wrong kind of paper. You heard Rep. Williams make the point that 5,600 people they found so far in Colorado that were deceased, but on our voting rolls. Arizona came up with the same thing. Thousands.” 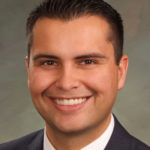 Although Beedle goes a good job of refuting most of the claims made by Hanks in her story as quickly as they’re transcribed, this business about “168,000 paper ballots on the wrong kind of paper” rang a bell with us–because Politico debunked it last month after Donald Trump first invoked it:

THE FACTS: All of that is false. The ballots were not unofficial or printed on illegal paper, and even [Cyber Ninjas CEO Doug] Logan never alleged they were fraudulent.

Logan pointed to ballots with the printing slightly offset between the front and back. He claimed this could cause votes to be counted for the wrong candidate if ink from one side bleeds through to another. He said the alignment issues were mostly from polling-place ballots, which are printed onsite, and said about 168,000 ballots were cast that way. The overwhelming majority of Arizona voters cast ballots by mail.

As for the claim that “dead voters” cast ballots in Colorado, this is a perennially recycled mix of whole-cloth falsehoods and a simple misunderstanding of how mail ballots work: with a window of several weeks between the delivery of ballots and Election Day, some number of voters will statistically return a mail ballot and then, you know, die. That’s unfortunate but one thing it’s not is fraudulent.

Though as Beedle’s story continues, the real mistake we may be making is trying to make sense of anything Rep. Ron Hanks says:

Hanks suggested that, despite the trusted build process and risk-limiting audits, Colorado’s elections are still vulnerable because the voting equipment is manufactured in China. [Pols emphasis] “I wanted to mention the Dell computers, the laptops that are used around the nation, as part of that election system equipment,” he said. “Those are made in China. Those are made in Chengdu, China. They run all kinds of programs that are not necessary for a single-use system like an election computer. When you have software that runs solitaire, and all those games, you end up with millions of lines of code. Nobody knows what’s in all that code.”

We had to ask someone who really understands how computers work to get some perspective on how preposterous this accusation is. Despite Hanks’ brainless assertion, there of course are lots and lots of people know exactly what is in “all that code” loaded onto a Dell laptop. In order for the Chinese government or anyone else to tamper with the software pre-installed on a Windows Dell laptop, Dell, an American corporation founded by leading Republican donor Michael Dell, would have to be involved. And probably Microsoft itself. And they’d have to do this to millions of laptops somehow undetected in the hope that some of them might be used someday in an election.

If what Rep. Hanks alleges is actually happening, everyone should turn off all our electronic devices and go live in a cave. While it’s true that the more grandiose the conspiracy the more difficult it may be to totally disprove, in this case the whole notion gets ridiculous enough that you really don’t have to bother. It’s just, to quote Shakespeare, a tale told by an idiot.

Kudos to the Colorado Springs Independent for exposing this town hall and the craziness vocalized within. One of the defining characteristics of the “Big Lie” is how quickly the narrative falls apart under not even critical but just expository examination–and that’s definitely the case here.