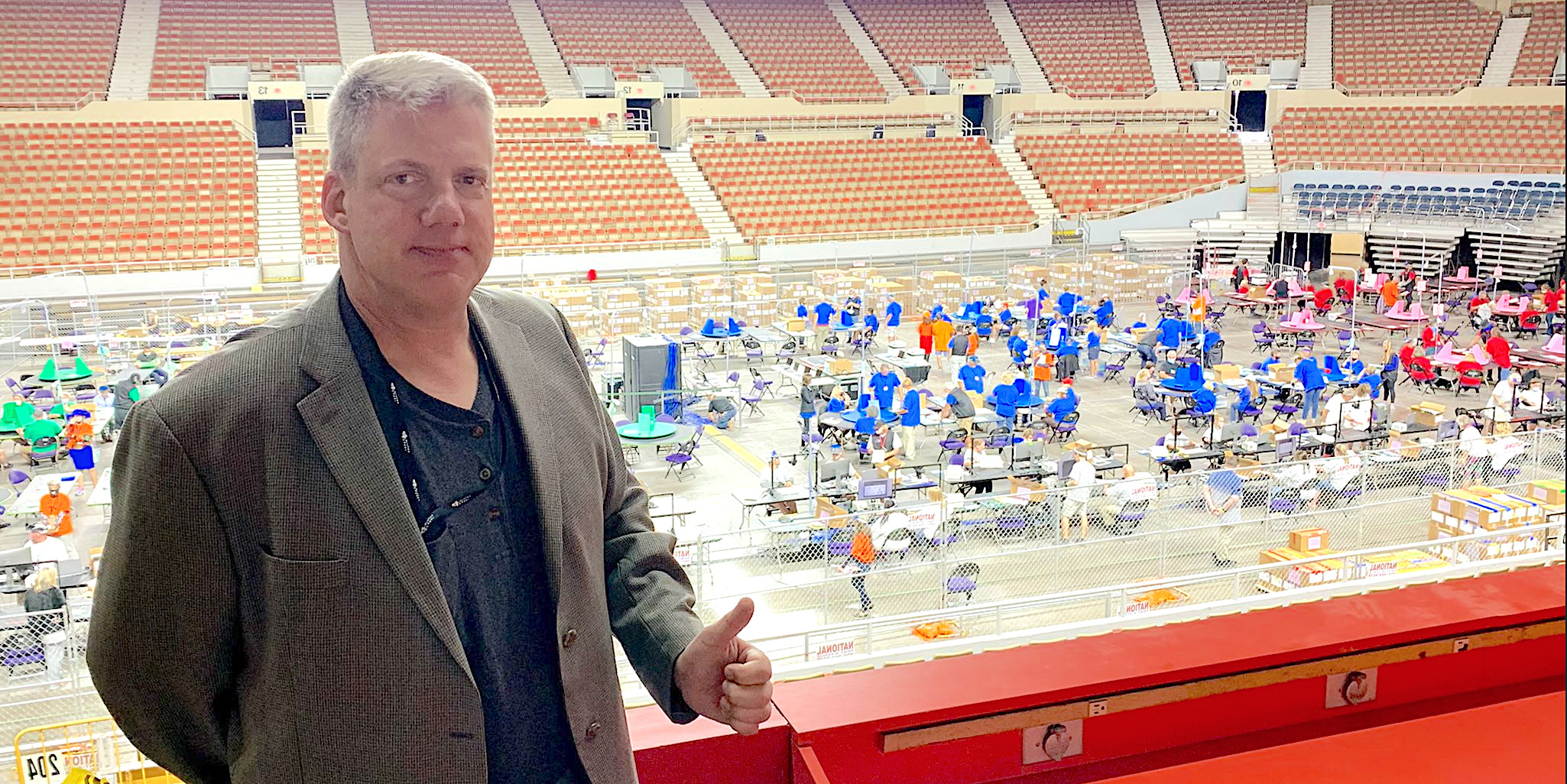 “We’re walking between the Capitol building and the police force…and this doesn’t feel right to me as a guy who knows a little bit about physical security,” state Rep. Ron Hanks (R-Penrose) said in a July 14 interview, recounting his own participation in the Jan. 6 rally and march to the U.S. Capitol that led to Trump supporters overwhelming police and storming the building.

In the hour-long radio interview with Melissa “Lisa” Hyams, vice-chair of Fremont Country Republicans, Hanks also questioned the validity of the 2020 election and promoted a QAnon conspiracy movie, “The Deep Rig,” which makes unfounded claims of election fraud and promotes wild conspiracies involving hundreds of thousands of fake ballots, hacked voting machines, and CIA plots to ensure a Biden victory.

Hanks covered a lot of ground in the discussion, but he began by recounting his activities on Jan 6, including repeating the debunked claim that Trump supporters didn’t storm the Capitol, but in fact Antifa and Black Lives Matter agitators were responsible for the deadly insurrection, calling it a false flag operation.

“By the time we walked from the elipse at the White House down to the Capitol building, there were already people climbing on the scaffolding,” said Hanks. “We went right down the road, we got there ahead of 80-90% of the crowd. There’s a solid case to be made that we had people intrude on that [the rally] and that it was a bit of a false flag operation- well let’s not say ‘a bit of’ let’s say false flag. “When we walked from the west side of the Capitol, which facing the Lincoln Memorial back around to the east side, which would be facing the Supreme Court. There were some barriers that had been pulled open. And now we’re walking between the Capitol building and the police force, which is in the parking lot. And this doesn’t feel right to me as a guy who knows a little bit about physical security. And so I kept looking at him. I kept giving him the eye, expecting them to either divert us around or- they never did. They looked straight at us and let us walk.

Hanks concluded by promoting an election fraud conspiracy movie called “The Deep Rig,” directed by a man whose previous works include a movie claiming that aliens were responsible for the 9-11 terrorist attacks. Hanks, who says he attended the movie’s premiere while he was in Arizona helping with the sham audit, is organizing a screening of the movie in Fremont County.

“You know, if I might mention it, there is a movie that is being put out by a libertarian, Patrick Byrne. He is the founder and former CEO of Overstock.com. He did not vote for Trump both times, but he saw something wrong with the election. The movie is called The Deep Rig, and we watched the premiere of it down there in Arizona… It was solid. It’s a powerful movie. It starts with the six January rally down there at the Capitol in D.C. And I would encourage anybody to look for it. I think it will offer an objective evaluation of what we’re doing,” said Hanks, referring to the sham audit in Arizona.

In praising the film’s objectivity, Hanks neglected to mention that one of the stars, a narrator referred to as “Anon,” is revealed to be Doug Logan, CEO of Cyber Ninjas, the firm hired by Arizona Senate Republicans to conduct the so-called “audit.”

After radio host Hyams mentioned that Fremont GOP was planning on showing the movie locally, Hanks replied that there was a hang-up with the film’s distribution, but said he “had calls into the producers,” presumably to sort out the screening logistics. The producers are charging $500 for groups or venues to stream the film to an audience.

Hanks said he believes an investigation is warranted into Colorado’s 2020 election, “given the problems [he’s] seen.”

Asked about his conversations with county clerks in his district (Fremont, Custer, Chaffee & Park), Hanks said he’s spoken with all but one of them (Chafee).

“Most of the clerks would say and probably carry on the line of, ‘we’re fraud free, we’re the gold standard’ and so forth, and I just fundamentally disagree,” said Hanks. “And I think we’re right to have our doubts.”

While Hanks was still on the air, Clerk Grantham commented on the show’s livestream, disputing Hanks’ implication that the two had discussed election security.

Grantham, a Republican who has previously praised Colorado’s secure elections, confirmed to the Colorado Times Recorder that he had not spoken to Hanks about Fremont County’s election security protocols. He said he does support the Colorado County Clerks Association’s proposal to make all ballot images available online to the public, as well as allowing more auditing of the voter rolls, and said the Association is working with the Secretary of State’s office to determine if such measures are feasible.

Grantham said he’s sending Hanks a letter inviting him to tour the clerk’s office and learn about the ballot tabulation process.

“I’ll invite him to take a tour and ask any questions he wants, because at the end of the day, we are the boots on the ground,” said Grantham. “We know exactly how we’re doing our job. And if you’re not going to talk to us and ask us, obviously whomever is feeding you the information is not feeding you the correct information. So I will once again ask him if he wants to be involved in the odd-year election because he won’t be on the ballot. He can absolutely be an election judge. He can come in and ask any questions he wants or be part of the situation. And maybe next year when the Republicans try to run bills, maybe they’ll actually include clerks in the discussion this time so that we can help them draft the bill correctly so it’s actually viable and can actually pass through the legislature because that’s how you change things- you go through the legislature.”

This past session Republicans proposed multiple bills that would have made it harder to vote, by ending or restricting practices such as mail ballots and early voting that Coloradans have used safely and securely for nearly a decade.

Asked if he plans to attend any upcoming screening of the election fraud conspiracy film, Grantham said he probably would go, in order to be able to answer questions and correct inaccuracies.

“I have a philosophy of the best way to defend yourself against misinformation is know what they’re actually talking about, said Grantham. “So I probably will end up going just to see what it says, because if it does mention something in Colorado, it’s a perfect opportunity for me to set the record straight because I’m there. And then if they have questions like ‘Does this really happen in Colorado,’ I can say yes or no.”

Hanks did not return a voicemail requesting comment. This article will be updated with any response received.