As Colorado’s Independent Redistricting process nears its conclusion, the “independent” piece might be getting left behind in the final chaotic hours.

Last week the Congressional Redistricting Commission approved a new map that must now be approved by the State Supreme Court. That map had its supporters and its detractors, but it seemed to be a decent consensus decision if you follow the old saying that a good compromise is one in which neither side is particularly happy.

There’s a much different story brewing with the Legislative Redistricting Commission, where two Republican commissioners (Hunter Barnett and Aislinn Kottwitz) are trying to shepherd maps — one for the State House and one for the State Senate — that would throw a life raft to a drowning Colorado Republican Party for the next decade. This is the sort of gerrymandering that Colorado voters thought they were going to avoid with the passage of Amendments Y&Z in 2018. It’s also something that we thought the legislative commission would have avoided itself given the wealth of reporting on the illegal behind-the-scenes lobbying efforts that have been undertaken by Republican political operatives.

3/8 Communications I obtained this week via CORA provide additional glimpses at other (but by no means all) undisclosed contacts.

Here’s Republican operative Alan Philp TEXTING A GOP COMMISSIONER HOW TO VOTE AS MAPS AND AMENDMENTS WERE BEING CONSIDERED. https://t.co/wjUZJKWLX1 pic.twitter.com/8pN84d770j

We’ve written a few times in this space about the lobbying tactics spearheaded by Republican operatives Alan Philp, Frank McNulty, and Greg Brophy under the banner of a 501c4 group called the “Colorado Neighborhood Coalition.” (We’ve also noted the heavy-handed pleas to supporters from Republican Rep. Matt Soper). Evan Wyloge of The Colorado Springs Gazette has broken several stories about these shady lobbying tactics, including the news that these GOP operatives are being officially investigated by the Colorado Secretary of State’s office.

We would have thought that the redistricting commissions would be particularly careful to avoid the appearance of impropriety after these reports surfaced. Soper himself flat-out told supporters on a recorded video presentation that Philp, McNulty, and Brophy were hired by the Colorado Republican Party to “represent our interests” with their “only goal” to increase the GOP’s seat count in the state House and Senate. As we wrote on August 25:

The antics of Soper, McNulty, Brophy, and Philp are shining a new light on blatant Republican interference in the redistricting process, contrary to the rules laid out in Amendments Y&Z…and at precisely the wrong time for the GOP.

If the commission is worried about the appearance of partisan influence from Republicans, then they are likely to give extra scrutiny to any map boundaries that might so much as appear to be advantageous to the GOP.

As it turns out, Republican members of the legislative commission are apparently unbothered about how shady this all looks. That includes the Chair of the redistricting committee, Unaffiliated member Carlos Perez, whose legacy for the next decade would be sliding out of the way of an independent redistricting process.

The Colorado Democratic Party sent out a “Red Alert” email on Thursday warning that GOP commissioners Barnett and Kottwitz are trying to ram through last-minute changes to their own proposed maps that would provide Republicans with huge advantages:

This is not hyperbole. Take a look at this one image from the Senate redistricting map proposed by Barnett, which includes a ridiculous carve-out for incumbent State Senator Kevin Priola: 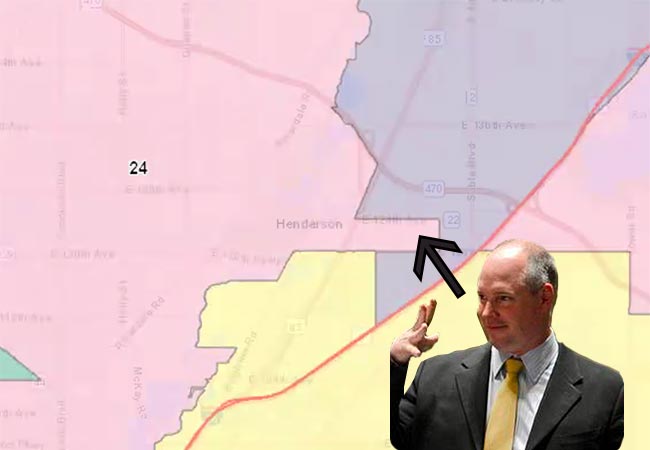 Barnett ignored advice from nonpartisan redistricting staff to split Brighton and Commerce City into different Senate districts, which is something that accomplishes two stated redistricting goals: 1) Preserve political subdivisions, and 2) Avoid giving an advantage to incumbent lawmakers. Instead, Barnett included this little carve-out so that Priola would remain inside the boundaries of SD-24.

Here’s why this “Priola Proboscis” is so important: It draws Priola — a Republican — into a Democratic-leaning district, where he can remain in the State Senate until he is term-limited in 2024. This district SHOULD be represented by a Democrat. At the very least, voters in a Democratic district should be allowed to pick their representative in the 2022 midterm election, but for at least two years this district would be automatically represented by a Republican. Democrats currently hold a two-seat majority in the State Senate; that would instantly be reduced to a one-seat advantage thanks to Barnett. This is the very definition of gerrymandering, only Republicans wouldn’t even have to wait for an election to pick up a seat.

“Y and Z will be the first step toward achieving a Senate majority,” Senate Minority Leader Chris Holbert, a Republican from Douglas County, said during a post-session news conference Thursday at the state Capitol. Holbert referred to Amendments Y and Z, which established a new redistricting process that Holbert said will get rid of unfair election advantages for Democrats.

In approving Amendments Y&Z to create these new redistricting commissions, voters were saying that they wanted more independence and less partisanship from the process. Instead, the legislative commission is on the verge of approving two Republican-drawn maps in a state where Republicans have consistently failed to win recent elections.

For months we’ve been asking aloud if the antics of GOP operatives would damage their own interests in the eyes of the commission. Now we’re left wondering if the independent commission wants to conclude hours upon hours of discussions by approving maps advocated by lobbyists who are being investigated by the state for breaking the law. It would be a shame if the legislative commission concluded their work with a shrug and a partisan rubber stamp.

Some 11th hour independence could still win the day. The legislative commission could follow the lead of their congressional counterparts and vote on final draft maps presented by the nonpartisan redistricting staff, which are scheduled to be unveiled on Tuesday.