Get More Smarter on Friday (Oct. 1) 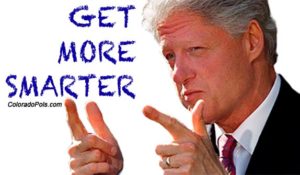 Happy “World Vegetarian Day.” Try the grilled cheese. Let’s Get More Smarter. If you think we missed something important, please include the link in the comments below (here’s a good example). If you are more of an audio learner, check out The Get More Smarter Podcast. And don’t forget to find us on Facebook and Twitter.

► As Colorado Newsline reports, a debt limit disaster has been averted for the time being:

Congress made a last-minute dash to avert a government shutdown on Thursday, with the U.S. Senate and House approving a short-term spending bill just hours ahead of a midnight deadline.

Every Democratic and independent senator and 15 Republicans supported the bill in the 65-35 vote. The GOP senators in the “aye” tally included Bill Cassidy and John Kennedy of Louisiana; Susan Collins of Maine; Roy Blunt of Missouri; and Richard Burr and Thom Tillis of North Carolina. Both of Colorado’s senators — Michael Bennet and John Hickenlooper — are Democrats.

The House later passed the federal spending bill — which will keep government agencies funded at current levels through Dec. 3, and provide $28.6 billion in aid for regions struck by extreme weather — on a vote of 254-175.

► …But the slog continues. The Associated Press updates on efforts by Congressional Democrats to work out an infrastructure deal while avoiding a debt ceiling disaster that Republicans refuse to even discuss:

Democrats were back at it Friday, doggedly determined to rescue a scaled-back version of President Joe Biden’s $3.5 trillion government overhaul and salvage a related public works bill after a long night of frantic negotiations that resulted in no deal.

House Speaker Nancy Pelosi was gathering the party’s lawmakers for a private morning session to assess the path forward. She vowed there would be a “vote today” on the companion $1 trillion infrastructure bill that is popular but has become snared in the broader debate. But the situation was highly uncertain, and no schedule was set.

Holdout Democratic Sen. Joe Manchin of West Virginia sank hopes for a compromise late Thursday, despite hours of shuttle diplomacy with White House aides on Capitol Hill, when he refused to budge on his demands for a smaller overall package, around $1.5 trillion. That’s too meager for progressive lawmakers who are refusing to vote on the public works measure without a commitment to Biden’s broader framework on the bigger bill.

Meanwhile, Wisconsin Republican Sen. Ron Johnson again said the quiet part out loud regarding discussions on an infrastructure deal in Congress: The only Republican policy idea is performative obstruction:

“I hope the progressives stand their ground, so that nothing happens. That would be the best result” — Sen. Ron Johnson pic.twitter.com/F97pLUrexF

► If you could use a primer on all the drama in Congress, this rundown from The New York Times might be helpful:

► State Republican Party Chair Kristi Burton Brown has been advising Colorado Republican candidates to avoid talking about Mesa C0unty Clerk and Recorder Tina Peters. This seems like perfectly reasonable advice, but KBB is doing it quietly because Republicans are still terrified of upsetting a base that believes deeply in “The Big Lie.”

► If you’re not familiar with the “Eastman Memo,” then you should really get acquainted with the specifics.

On March 11, 2020, one of my deputies came into my office to let me know that they had stumbled into a meeting among Hope Hicks (who had just returned to the White House as counselor to the president after a two-year stint at Fox), Jared, and White House Counsel Pat Cipollone. The WHO had just declared Covid a pandemic, and the three of them had apparently been discussing the need for the president to give an address to the nation on Covid-19 from the Oval Office that evening. An address to the nation is serious stuff, and whenever possible you need plenty of time to prepare properly — unless, of course, you were in the Trump White House, where everything was like a clown car on fire running at full speed into a warehouse full of fireworks.

A couple of hours later, a meeting was called in the Oval Office so that members of the Coronavirus Task Force could brief the president on the latest involving the virus. I wasn’t invited to that either, which was typical. Meetings just “happened” all the time in that White House. Random people would wander into the Oval Office and start talking about random things, and suddenly something would be decided or Trump would agree to do something — and anyone who wasn’t in the room would find out about it later on Twitter or on cable news. So I invited myself…

Grisham writes that Ivanka kept insisting that President Trump deliver an address to the nation on the COVID-19 pandemic, mashing her influence buttons in order to override the opinions of everyone else:

Finally, Ivanka turned to her most powerful ally besides her father. “Jared, don’t you agree?” Any guesses as to what Jared replied?

When I worked for the first lady in the East Wing, we had all come to call Jared and Ivanka “the interns” because they represented in our minds obnoxious, entitled know-it-alls. Mrs. Trump found that nickname amusing and occasionally used it herself. Now, during one of the most important crises to hit the country in a century, the interns were behaving true to form.

At one point I called Ivanka out on her plan with what seemed an obvious question. “What is it we’d be saying?” Because if she had a message she wanted her father to deliver, it was still a mystery to me. She just looked at me, seemingly confused.

Ladies and gentlemen, the Trump administration!

► Republican Lang Sias is apparently considering making a run for State Treasurer in 2022. Considering Sias’ decade of failure as a candidate for public office, our advice is simple: Don’t Do It, Lang!

…as Andrew Jeong and Adela Suliman reported this morning: “A New York state mandate that took effect this week, requiring health-care workers to be vaccinated against the deadly coronavirus, has boosted the immunization rates of care providers, to the relief of officials who had worried that the order could lead to mass walkouts and staff shortages.

As of Wednesday, 87 percent of hospital staff were fully vaccinated, up from 84 percent the previous week, the state reported. Between 89 and 92 percent of staff working in hospitals, nursing homes and adult care facilities had received at least one dose of a coronavirus vaccine, it added.”

And NPR reported Wednesday that, while surveys show half of unvaccinated workers say they’d rather quit than get the jab, few actually follow through.

► Is the campaign for Republican gubernatorial candidate Heidi Ganahl even really trying to win in 2022? It’s legitimately hard to tell.

► Teague Bohlen of Westword looks at the evolution of Rep. Lauren “Q*Bert” Boebert, who is gaining a new reputation that is not as helpful as her gun-toting persona:

While guns are undeniably the thing for which Lauren Boebert wants to be known, the misuse of funds is quickly replacing firearms as Boebert’s brand. To be sure, the love of gun culture is how she first gained some notoriety, ironically with the very pistol-packing restaurant that is now suddenly becoming problematic to her political career. But that purposeful persona can only be crafted for so long before a politician’s actions begin to define her more than her rhetoric. As Boebert’s little Wild West show continues, she’s looking less Wyatt Earp and more Soapy Smith.

► As The Colorado Times Recorder reports, an election fraud truther group is taking their door-to-door “who’d you vote for” approach to other states in an attempt to prove “The Big Lie.”

► The Guardian newspaper reports on some unsettling connections between Republicans and dangerous right-wing groups:

A leaked document has revealed the membership list of the secretive Council for National Policy (CNP), showing how it provides opportunities for elite Republicans, wealthy entrepreneurs, media proprietors and pillars of the US conservative movement to rub shoulders with anti-abortion and anti-Islamic extremists.The Southern Poverty Law Center (SPLC), which monitors rightwing hate groups, describes the CNP as “a shadowy and intensely secretive group [which] has operated behind the scenes” in its efforts to “build the conservative movement”.

The leaked membership list dates from September last year, and reveals the 40-year-old CNP put influential Trump administration figures alongside leaders of organizations that have been categorized as hate groups…

…The member list also includes representatives of major US corporations, such as Marc Johansen, vice-president for the satellites and intelligence program for Boeing; Jeffrey Coors, of the Coors brewing family, who have extensively sponsored conservative groups [Pols emphasis]; Lee Roy Mitchell, the founder and chairman of the board for movie chain owner Cinemark Holdings; Steve Forbes, the founder and chief executive of the Forbes business media empire; and Scott Brown, a senior vice-president at Morgan Stanley.

Other members of the group represent organizations that operate under a veil of secrecy, with conservative “dark money” organizations well represented.

► As John Aguilar reports for The Denver Post, every member of Colorado’s Congressional delegation — EXCEPT Rep. Ken Buck — signed onto a letter urging the Secretary of the Air Force to keep the U.S. Space Command HQ in Colorado.

► The U.S. Senate voted to approve Tracy Stone-Manning as director of the Bureau of Land Management. Stone-Manning is the first confirmed BLM head since the Obama administration; under President Trump, the BLM was overseen only by “acting” directors.

► Janitors at Denver International Airport go on strike today after their contract expired without agreement on a new deal.

Here’s Rep. Lauren “Q*Bert” Boebert just casually making a disgusting (and nonsensical) allegation about the President of the United States in order to get a few retweets from her base:

SOURCE ON THE HILL:

“Tried to start a Fu*k Joe Biden chant at the congressional baseball game when Biden showed up.@laurenboebert as a great American joined in and tried as well. But the worthless GOP staff cucks were silent. It tells you everything you need to know about DC.”

► Klete Keller, the former Olympic swimmer from Colorado Springs who participated in the Jan. 6 insurrection at the U.S. Capitol, pleaded guilty to trying to disrupt the certification of Electoral Votes in Congress. This could be a significant admission for pending cases against other insurrections.

► Check out our “Winners and Losers” from the 2021 Congressional Redistricting process.