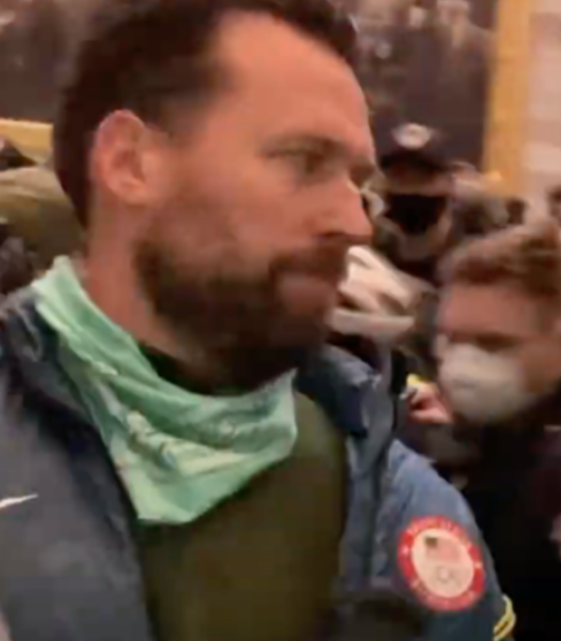 Klete Keller, wearing his Olympic gear inside the U.S. Capitol on January 6th, 2021.

The Denver Post’s Shelly Bradbury reports on the plea agreement accepted by a federal judge yesterday in the case of Klete Keller of Colorado Springs, an Olympic gold-medal swimmer facing multiple charges after helping storm the U.S. Capitol on January 6th for the purpose of disrupting the certification by Congress of Joe Biden’s victory in the 2020 presidential elections:

Keller was indicted in February on seven counts, including obstruction of an official proceeding, disorderly conduct and entering a restricted building, after investigators identified him in video footage of the gathering. The six additional counts against him were dismissed as part of the plea agreement.

In Keller’s statement of offense as part of the plea agreement by which he pled guilty to a single felony count of obstructing an official proceeding, as reported by the Colorado Sun’s Olivia Prentzel, Keller admits to fully understanding the purpose of his actions that day:

“At the time I entered the Capitol building, I knew that I did not have permission to enter the building, and I believed that I and others were trying to obstruct, influence and impede an official proceeding, that is, a proceeding before Congress,” Keller wrote in a statement of offense.

As CNN’s Marshall Cohen reports, Keller is likely going to prison–but he isn’t expected to face the maximum 20 years in prison he could for the charge he pleaded guilty to. The reason for that appears to be some genuine contrition on Keller’s part, and an agreement to cooperate with federal prosecutors on future cases:

The deal with Keller suggests prosecutors might try to use him as a star witness at upcoming trials, banking on his notoriety as a decorated athlete who won gold medals in swimming at the 2008 Beijing Olympics and the 2004 Athens Olympics…

Until now, the only rioters who have struck cooperation deals were members of extremist groups who could testify against their fellow members… [Pols emphasis]

“He’s obviously trying to make amends for the terrible decision he made on January 6,” Keller’s lawyer Edward MacMahon told the judge. “He’s embarrassed by what he did that day and wants to make amends to the court and to the American people.” [Pols emphasis]

Keller was reportedly embarrassed enough–or at least worried enough about being recognized by the investigation–that he threw away the official U.S. Olympic Team jacket he wore for the insurrection. Nonetheless, Keller’s actions disgraced not just himself, but the U.S. Olympic Team and the large base of support for Olympic athletes across America. For the crime of operationalizing the “Big Lie” with violence, Keller now faces two years in federal prison and the lifetime stigma of a felony conviction. Keller lost his job in real estate in Colorado Springs, and his actions were condemned by the U.S. Olympic and Paralympic Committee.

If Keller’s mission now is to “make amends” to the American people for his actions on January 6th, in addition to whatever testimony he might offer to assist in other cases, he needs to speak out strongly against the falsehoods that motivated his actions. Klete Keller didn’t storm the Capitol on his own initiative. He was sent there by a defeated so-to-be ex-President, desperately trying to hold on to power via a planned coup Keller was merely a foot soldier in the service of. Trump loyalist Republican candidates in Colorado from fellow Olympian Eli Bremer to Lauren Boebert have a whole new slate of questions to dodge about Klete Keller.

Klete Keller’s redemption, if it ever comes, will start at the top and work its way down to Keller’s bit part.