Get More Smarter on Thursday (August 19)

Happy “World Humanitarian Day.” Please celebrate responsibly. Let’s Get More Smarter. If you think we missed something important, please include the link in the comments below (here’s a good example). If you are more of an audio learner, check out The Get More Smarter Podcast. And don’t forget to find us on Facebook and Twitter.

► Where is Tina Peters?

That’s the question everybody is asking lately about the Mesa County Clerk and Recorder who is facing multiple investigations over a breach of election security in May. Peters might be hiding out in Texas at the moment, harbored (at least in part) by “MyPillow Guy” Mike Lindell.

In related news, former Republican Secretary of State Wayne Williams thinks Peters should resign from her position, but the State Republican Party in Colorado can’t figure out what to say:

Former Secretary of State Wayne Williams is the most prominent Republican to call for Peters’ resignation. The @cologop has not responded when asked if Peters should step down. #copolitics #9News https://t.co/jkVLpyZD8g

Click here to read more about the weird story of Peters and some of her fellow conspiracy-minded Western Slope cronies.

► Yahoo! reports on new polling related to the withdrawal of American forces from Afghanistan:

Amid the swift and sudden collapse of Afghanistan this week — and widespread coverage of the chaos that has engulfed the war-weary country as the Taliban seized control again — support for both the long-planned withdrawal of U.S. forces and for President Biden’s handling of foreign policy has declined significantly, according to a new Yahoo News poll.

At the same time, more Americans still favor the U.S. withdrawal than oppose it — and there are early signs that the political fallout for the president could be limited in the long run. [Pols emphasis]

Biden’s polling slide on foreign policy is largely due to unease from Republican voters.

► Colorado organizations are preparing to assist in relocating Afghan refugees to our state.

► The 2022 election is fast approaching, so why do Colorado Republicans STILL not have serious candidates for most of the major statewide races on the ballot next November?

► Congressperson Lauren “Q*Bert” Boebert (R-ifle) continues to use her campaign account as her own personal slush fund. Federal investigators are looking into some strange reimbursements from her last campaign finance report.

The husband of Colorado GOP Rep. Lauren Boebert made $478,000 last year as a consultant for an energy firm, information that was not disclosed during Boebert’s congressional campaign and only reported in her financial disclosure forms filed this week. https://t.co/PWgp7V4Fau

Let’s not make any effort to come up with new explanations here. There is a term for this already: It’s called “lying.”

► As POLITICO reports, Republican leaders around the country are embracing expensive and hard-to-get treatment plans for COVID-19 instead of just supporting the wearing of masks as a preventative measure:

The governors in Florida, Missouri and Texas are promising millions of dollars in antibody treatments for infected people even as they oppose vaccine and mask mandates, saying they can potentially keep people with mild Covid symptoms out of hospitals that are being swamped by new cases. But the treatments and cost of providing them are thousands of dollars more than preventive vaccines, and tricky to administer because they work best early in the course of an infection.

The push to medicate rankles public health officials and some within the Biden administration, who say the governors’ stance misleadingly implies Covid-19 can be treated easily, like the common cold. They note treatments like Regeneron’s antibody cocktail — which was administered to former President Donald Trump during his bout with the disease — are essential but part of a limited arsenal to keep patients from being hospitalized or dying, not a game-changer that could help end the pandemic.

CNN’s Chris Cillizza saves some particular ire for Florida Gov. Ron DeSantis, whose state might be the epicenter of the latest COVID-19 outbreak.

►  President Biden has directed the Education Department to take action in states where Republican Governors have attempted to prohibit mask mandates in public schools:

At a news conference, Biden said his administration would not “stand by” and allow governors to prevent local districts from “keeping students safe” with masking mandates for the new academic year as cases from the delta variant of the coronavirus are skyrocketing.

He did not name any specific governor, but Republican governors Ron DeSantis of Florida, Greg Abbott of Texas and Doug Ducey of Arizona, are among those state leaders who have threatened to withhold funding from districts or take other action against those districts that defy them. In Florida, Miami-Dade County Public Schools, the fourth largest district in the country, on Wednesday passed a universal masking mandate — with only a medical opt-out — as did Hillsborough County Public Schools.

► Not great news about COVID-19 in Colorado:

Today’s numbers are in. Bottom line…big one day jump in cases. Biggest one day count since May 12.

Positivity jump too. Above 8% in one day

Hospitalizations above 600. Unfortunately, my hope that we’ve hit peak might have been premature. pic.twitter.com/olLpwi1KB9

► Governor Jared Polis is pushing vaccine mandates for health care workers in Colorado. The Colorado Department of Corrections is also defending a decision to require vaccines for its employees.

On the other side of the reality spectrum, Douglas County Commissioners are planning to opt-out of a Tri-County Health Department mask mandate for public schools.

► President Biden says that he and First Lady Jill Biden will receive a COVID-19 booster vaccine in the near future.

► POLITICO reports on a potential new strategic direction for the AFL-CIO following the death earlier this month of longtime President Richard Trumka. Secretary-Treasurer Liz Shuler is expected to be named interim President, the first woman to hold that position for the AFL-CIO.

► As The Denver Post reports, federal wildland firefighters are finally getting a pay raise.

► The Title Board declined to approve a potential ballot measure seeking to reduce the sales tax in Colorado.

► Even amidst a global pandemic, Colorado hospitals remain the most profitable in the country.

► CoPIRG is looking for solutions to Denver’s air quality problem.

► Rapid growth in the Greeley area may need to slow because they are running out of water.

► I-70 in Glenwood Canyon is closed again because of flood warnings. Westword looks at an ominous future ahead.

Yes, that about covers all of the available adjectives here: 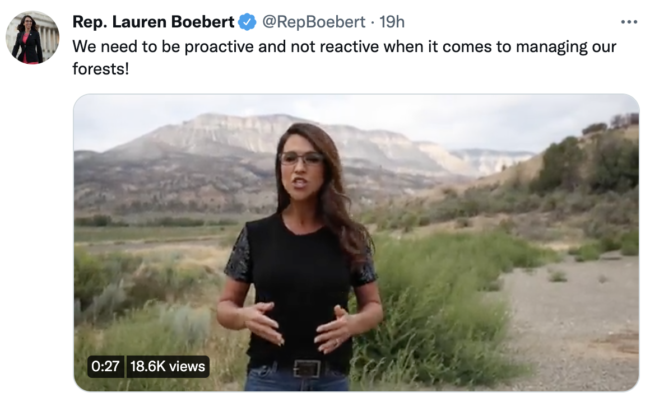 ► School board members in District 51 (Western Slope) are looking for answers and solutions after several recent public meetings went haywire thanks to unruly activists.

► The Washington Post profiles an Alabama doctor who is refusing to treat ANY patients who are not vaccinated against COVID-19.