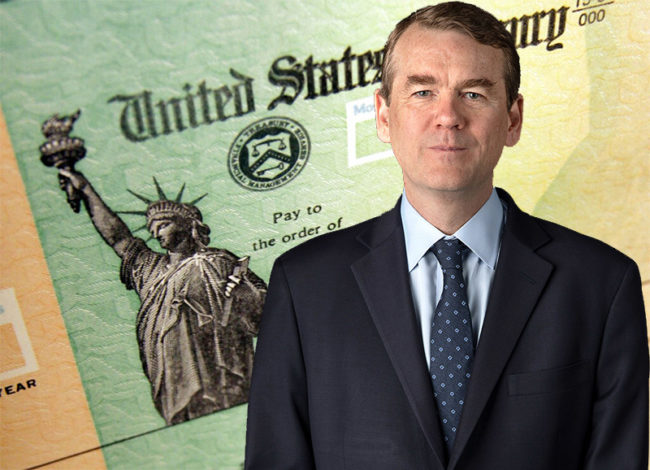 As the Pueblo Chieftain’s Sara Wilson reports, this morning millions of American families are waking up to a fresh round of economic relief in their bank accounts–with billions more on the way, marking one of the biggest direct transfers of wealth into the cash flows of families with children in American history:

Eligible families will begin to receive monthly payments on Thursday for the expanded federal child tax credit, a milestone in social public policy that was passed as part of the American Rescue Plan Act earlier this year.

“In my view, the expanded child tax credit is the biggest investment Washington has made in kids and families in more than a generation,” Bennet told constituents during a telephone town hall on July 12.

“It’s the most progressive change to the tax code in my lifetime.”

Couples making less than $150,000 and single heads of household making less than $112,500 will get half of their $3,000-$3,600 per child tax credit in monthly installments–or if taxpayers prefer, they can forego the payments and get all the money in a lump sum when filing their taxes next year. Either way it’s a dramatic increase in the child tax credit delivered sooner and providing sustained help to millions of American families. As FOX 31 reports, the battle now turns to making this historic relief for working families permanent:

“Even if we extend the child tax credit payment for a few years, that would still be a tremendous achievement for our kids and for our families. But if we can make it permanent, that would be a historic victory for America, no less important than what we did with social security or Medicare,” Bennet said. [Pols emphasis]

In terms of legislation that will have a direct and tangible impact on the lives of a very large percentage of the population, Sen. Bennet’s child tax credit expansion ranks among the most substantial achievements ever realized by a U.S. Senator from Colorado. Making this credit and the monthly relief payment plan permanent will create a stream of income directly to families with children, and is projected to result in the biggest reduction in child poverty since the Great Society reforms of the 1960s.

Superlatives get thrown around in politics until they’re meaningless. But what Sen. Michael Bennet and Democrats have achieved with the child tax credit expansion objectively is historic. Ever since Bennet’s appointment to the U.S. Senate in 2009 and through his two election wins in 2010 and 2016, he’s been frequently maligned from the left still sore that Andrew Romanoff didn’t win the 2010 primary. But especially in the last couple of years, Bennet has become an influential voice for progressive policy goals–as well as an advocate for breaking the filibuster logjam in the U.S. Senate to allow many more Democratic priorities to become law.

Bennet’s name won’t be on “Bennet Bucks” checks, of course, but with this accomplishment alone he’s given himself a formidable edge for his re-election campaign in 2022. A primary from the left has less than ever to offer in contrast, and the general election message for Bennet just got compellingly reinforced. It’s not “buying support,” and it’s not “socialism.” This is targeted economic relief where it helps the most.

And it’s the stuff great legacies are made of.