Get More Smarter on Monday (March 22)

RIP to your March Madness bracket. Let’s Get More Smarter; if you think we missed something important, please include the link in the comments below (here’s a good example). If you are more of an audio learner, check out The Get More Smarter Podcast. And don’t forget to find us on Facebook and Twitter.

Sen. Michael F. Bennet (D-Colo.) tapped out the longest text messages he’d ever written one night in January, urging Susan Rice, a top Biden aide and a friend, to include a full-scale anti-child poverty measure in the coronavirus rescue plan to be unveiled within days…

…An unlikely coalition of Democrats across the ideological spectrum mounted an 11th-hour push in the final weekend before the American Rescue Plan for President Biden to go big on tackling child poverty. They prevailed over what one person involved in the process called the “cost police” in Biden’s inner circle, those anxiously warning about the ballooning cost of the stimulus package.

This under-the-radar success created what could be the most consequential piece of the $1.9 trillion package — one that, if made permanent, could approach the impact of the programs established under President Lyndon B. Johnson’s War on Poverty…

…The program’s impact probably will be profound. It expands the federal child-rearing subsidy by 50 percent — and parents of toddlers will get even more. A family with two young children and no income will now get $600 a month. The parents of 90 percent of the country’s children will benefit, and 27 million children will be lifted from poverty, according to analysts.

► Governor Jared Polis plans to lift the statewide mask mandate on April 4. From The Denver Post:

Colorado will further relax the COVID-19 restrictions managed through the state’s color-coded dial next week, with plans to ease the statewide mask order in two weeks, then turn over control of most public health orders to local governments in mid-April.

The proposed changes to the dial include reopening bars in most parts of the state for the first time since last summer and lifting all statewide limits on the size of personal gatherings.

While this is all good news regarding the COVID-19 pandemic, as The Washington Post reports, COVID-19 infections are trending in the wrong direction nationally:

New coronavirus infections are rising in several U.S. states, despite record vaccinations — an increase experts attribute to the growing reach of new variants and widespread pandemic fatigue after a year of public health restrictions. The seven-day average of newly reported cases climbed 2.6 percent on Sunday, even as overall hospitalizations and deaths remain down.

In Florida, a state where coronavirus measures are lax, authorities in Miami Beach declared a state of emergency and imposed a nighttime curfew this weekend as large crowds of rowdy spring break revelers turned violent and disruptive.

► Now, let’s catch up on more news from the Colorado legislature:

Alex Burness of The Denver Post reports on what lawmakers are considering for new law enforcement reforms. The legislature is also looking at changing sentencing guidelines in Colorado so that people who did not commit murder can’t end up serving life in prison for something they didn’t do.

Denver7 breaks down the proposals laid out for efforts to fix Colorado’s crumbling transportation infrastructure.

Colorado Newsline reports on an affordable housing measure that has been years in the making.

Colorado Public Radio elaborates on how and why Colorado’s budget looks better than expected.

The Associated Press considers whether Colorado may be able to do more on waiting periods for gun purchases. Westword has more on the good and bad news about ongoing efforts to promote gun safety.

Marshall Zelinger of 9News looks at the behind-the-scenes work done at the State Capitol in a story that includes the lede of the week: “Conjunction junction is their function.”

► John Aguilar of The Denver Post looks at how local governments plan on using their share of billions of stimulus dollars on the way as a result of the American Rescue Plan:

Lakewood Mayor Adam Paul said the city will likely put the $22.6 million allocated to Lakewood toward a budget that lost $18 million last year.

“This is triage,” Paul said. “There is no pork in this for us. I see it as backfill to what we lost.”

Since the city eliminated the sales tax on groceries more than a decade ago, Paul said Lakewood didn’t have the revenue cushion others had when people flooded grocery stores to stock pantries. He said 70 positions remain vacant on Lakewood’s payroll, a result of pandemic-pinched spending by the city.

“We have to use (the Rescue Act money) for the right here, right now,” Paul said.

► There’s lots of good news in the latest economic and revenue forecast for Colorado. 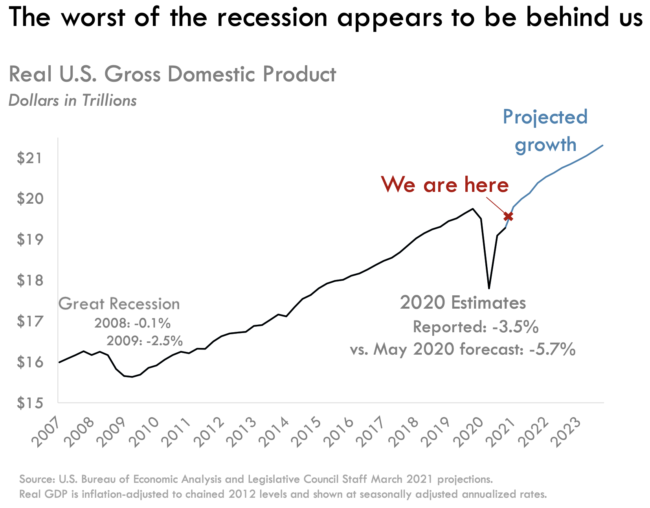 Denver7 has more on the new economic figures:

The Legislative Council Staff (LCS) forecast says that Colorado lawmakers are projected to have $5.29 billion more in FY2021-22 to spend or put in reserves than they did in the current fiscal year, though the forecast does not account for federal money expected to be received by the state from the American Rescue plan and notes that the 2021-22 budget has not been finalized.

But it also notes that there remain more questions about income tax refunds and how the longer-term effects of the pandemic could factor into Colorado’s financial situation if stimulus programs end in September.

“For broad measures of U.S. and Colorado economic activity, the worst chapters of the pandemic-induced recession appear to be behind us. However, pre-pandemic levels of economic activity are closer in some areas than in others. The recession did lasting damage to employment levels and consumer spending, and a long road to recovery lies ahead,” Legislative Council Staff wrote in the forecast.

► Colorado Public Radio reports on the return to Congress of the SAFE Banking Act, a proposal sponsored by Rep. Ed Perlmutter (D-Jefferson County) to allow legal marijuana businesses to have access to banking services.

► As Ernest Luning reports for the publication formerly known as the Colorado Statesman, Sen. Michael Bennet’s longtime chief of staff — Jonathan Davidson — is headed to the Treasury Department after securing an appointment as assistant secretary for legislative affairs.

► As The Colorado Sun reports, newly-formed redistricting commissions in Colorado may (and should) start working on drawing new congressional and legislative maps based on available Census data from 2018.

► Hundreds of people turned out in Denver for a rally to fight back against racism and violence targeting Asian-Americans.

► POLITICO examines how “owning the libs” became the core belief of the Republican Party:

In one sense, this is the natural outgrowth of the Trump era. Inasmuch as there was a coherent belief that explained his agenda, it was lib-owning — whether that meant hobbling NATO, declining to disavow the QAnon conspiracy theory, floating the prospect of a fifth head on Mount Rushmore (his, naturally), or using federal resources to combat the New York Times’ “1619 Project.”

But in a post-Trump America, to “own the libs” is less an identifiable act or set of policy goals than an ethos, a way of life, even a civic religion.

What “owning the libs” is not, however, is a plausible strategy for governance.

► As Colorado Public Radio reports, a second federal investigation is coming regarding a late 2020 decision by the Trump administration to relocate Space Command Headquarters from Colorado to Huntsville, AL.

► Federal prosecutors say that sedition charges are looking more likely as investigations into the January 6 attack on the U.S. Capitol continue.

► As The Denver Post reports, it was good to be a Colorado billionaire in 2020 (not that it’s ever a bad year to be a billionaire).

As Republican haters attack me we severed up FREE BBQ and toys for the community children! – The game changer! #MeatInDay #copolitics https://t.co/uVZuvUxXNJ

► Donald Trump is planning to launch his own social media network. As The Washington Post explains:

A top Trump adviser confirmed the former president is building his own social network after major tech companies suspended his accounts in the fallout of the Jan. 6 Capitol attacks.

“I do think that we’re going to see President Trump returning to social media in probably about two or three months here, with his own platform,” Trump senior adviser Jason Miller told Fox News on Sunday. “And this is something that I think will be the hottest ticket in social media, it’s going to completely redefine the game, and everybody is going to be waiting and watching to see what exactly President Trump does.”

Miller predicted the new platform will be “big” once it launches, suggesting he would bring tens of millions of people to the new service. He also said Trump has been having “high-powered meetings” at Mar-a-Lago regarding the venture, and that “numerous companies” have approached the former president.

It’s going to be the YUGEST thing anybody has ever seen!

► Congressman Lauren “Q*Bert” Boebert (R-ifle) is pleased as punch that the hashtag #LaurenBoebertIsSoDumb was trending on Twitter over the weekend. Why? Because she is using it to raise money from supporters and accuse the political left of “hating women.”

► Idaho lawmakers are taking a several week break because of a COVID-19 outbreak at the State Capitol. Idaho Republicans have long opposed safety precautions such as mask wearing and social distancing.

► Check out the latest episode of The Get More Smarter Podcast and a new look at our latest feature “Legislating With Crayons”: