What in the Hell is Lauren Boebert Talking About?

UPDATE: Dave Weigel of The Washington Post noticed the same bizarre answer that caught our attention. 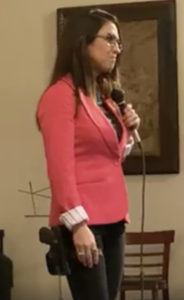 More reporting is coming out about Rep. Lauren “Q*Bert” Boebert’s town hall meeting in Montrose on Monday (the one that you weren’t supposed to tell anyone about), and every new piece of information is as bizarre as the last.

You know, I’ve decided I don’t want Democrats to call me congresswoman. I want them to acknowledge the man is a gender neutral term and they can call me Congressman Boebert.

To this cancel culture, this is nothing new. This is something that has been around since the beginning of time. Go back to the Book of Genesis: Cain canceled Abel. He didn’t like the sacrifices he was given to God. And he canceled him?

We see these radical social Democrats wanting to cancel Christianity now. They tried to cancel Jesus. You can’t cancel God.

If you’re wondering what sort of audience Boebert might be pandering to, Gavin Dahl of KVNF radio provided some, uh, “color” on the crowd at the Turn of the Century Saloon:

At least 95% of the attendees at the Saloon were unmasked, and there was no room for social distancing. Just before she hit the stage, at the table where I found a seat, attendees were complaining about Hillary Clinton, quote ‘Jews,’ and quote ‘Illegals.’

But perhaps the strangest exchange of the evening came near the end of the “town hall” event. As Dennis Anderson writes for The Delta County Independent:

The last question of the night drew a bizarre response from Boebert.

“Is there any hope for the people that top level government officials when they violate the law… will they ever be held accountable?”

“I want to tell you, I heard someone who is in very close contact with President Trump and the ins and outs of the White House under that administration. They talked to the owners of the Epoch Times and they said don’t change anything, you are right over the target. So anyone who tries and tells you that this is a fringe newspaper. Don’t listen to them. I have very good sources that tell me this is very good information. Is it 100%? I don’t know but it’s very good information. We all know that there was information that was declassified just a few days before President Trump left office. I know someone who is involved in declassifying that. This person is getting very tired of waiting on the DOJ to do something about it. And we’ll be hearing about it very, very soon. This is my opinion with that information that I have. I believe we’ll see resignations begin to take place and I think we can take back the majority in the House and the Senate before 2022.’” 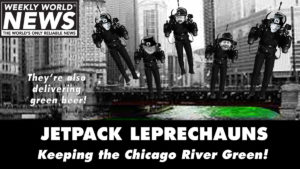 If you like “Weekly World News,” you’ll love “The Epoch Times.”

If you’re not familiar with The Epoch Times, check out this recent profile from The Atlantic. In short, The Epoch Times is sorta like the political equivalent of Weekly World News; calling it a “fringe newspaper” would almost be a compliment. The Epoch Times was created by a follower of the Chinese spiritual movement Falun Gong and refers to COVID-19 as the “CCP Virus” (shorthand for “Chinese Communist Party”). It became a reliable right-wing mouthpiece during the administration of President Trump, who espoused the kind of anti-China rhetoric that agreed with the Times’ founder.

Anyway, we THINK Boebert is talking here about something related to Trump’s authorization in his final days in office to “declassify” some Department of Justice documents related to the probe into Russian interference of the 2016 election. As to how this could lead to “resignations” or Republicans taking control of Congress BEFORE 2022…well, your guess is as good as ours.

Do Boebert and her supporters actually understand any of this gibberish? It’s impossible to say, but they THINK they do, and that’s the important part. None of these talking points are at all normal for an actual Member of Congress, but nonsense is the fuel that keeps the Boebert circus in operation.