Get More Smarter on Wednesday (February 24)

You had better find your snow boots; the Front Range is looking at a big snowfall later today. If you think we missed something important, please include the link in the comments below (here’s a good example). If you are more of an audio learner, check out The Get More Smarter Podcast. And don’t forget to find us on Facebook and Twitter.

► The United States surpassed 500,000 deaths from COVID-19 this week, but as The Associated Press reports, good news is on the way:

COVID-19 vaccine makers told Congress on Tuesday to expect a big jump in the delivery of doses over the coming month after a rocky start to inoculations, and the companies insist they will be able to provide enough for most Americans by summer.

By the end of March, Pfizer and Moderna expect to have provided the U.S. government with a total of 220 million vaccine doses, up from the roughly 75 million shipped so far.

“We do believe we’re on track,” Moderna President Stephen Hoge said, outlining ways the company has ramped up production. “We think we’re at a very good spot.”

That’s not counting a third vaccine, from Johnson & Johnson, that’s expected to get a green light from regulators soon. The Biden administration said Tuesday that it expects about 2 million doses of that vaccine to be shipped in the first week, but the company told lawmakers it should provide enough of the single-dose option for 20 million people by the end of March.

Here’s more from CNBC on the Johnson & Johnson vaccine that is believed to be effective with just one dose.

As Meg Wingerter reports for The Denver Post, Coloradans could see more vaccine availability next week:

The Colorado Department of Public Health and Environment confirmed the state is expecting to move into Phase 1B.3 of its COVID-19 vaccination distribution plan “on or around March 5,” but didn’t offer any details about whether everyone in that phase would be eligible at the same time.

“Providing accurate and accessible information around vaccines and vaccination is a priority for Colorado and we will continue to do so as we prepare for the upcoming phases,” a representative of the state health department wrote in an email.

Gov. Jared Polis has said that a new phase will start when about half of eligible people in the previous phase have received the vaccine.

Check out The Denver Post story for more information on the next round of eligibility for vaccines. CBS4 Denver has more on a recent hearing in Congress about vaccine availability chaired by Rep. Diana DeGette (D-Denver).

Elsewhere, health officials in Jefferson County say they have reached a goal to vaccinate more than 70% of the county’s population of adults over the age of 70.

► Back in December 2020, Colorado Pols first told you about an unusually-large reimbursement check that Lauren “Q*Bert” Boebert wrote to herself in what appeared to be a blatant violation of campaign finance rules. The story has only gotten worse for Boebert since then, and this week her campaign made a clumsy attempt at re-explaining the questionable reimbursement. As Justin Wingerter explains for The Denver Post:

On Monday, Boebert’s campaign filed an amended report to the Federal Election Commission, reiterating that Boebert received $21,200 on Nov. 11 but claiming it was a reimbursement for mileage, travel expenses and hotel stays. Mileage accounted for $17,280 of the reimbursements, the campaign says…

…Boebert’s reimbursements and the Post’s reporting led to complaints this month with the FEC and the Office of Congressional Ethics, neither of which has said it will investigate. Michelle Kuppersmith, executive director of the watchdog group Campaign for Accountability, said Boebert’s amended report does not affect their FEC complaint that was filed Feb. 8.

“These expenses should have been disclosed in her December 3, 2020, report,” Kuppersmith said. “Either she didn’t keep the required mileage logs, or her treasurer didn’t ask for documentation before he reimbursed her for all of these expenses. The Boebert campaign has proven that its FEC reports are unreliable, so the FEC should properly audit the campaign to determine where else they may have failed to comply with the law.”

► A State Senate committee killed a legislative attempt by State Sen. Paul Lundeen (R-Monument) that sought to make it MORE difficult to vote in Colorado. Republican Sen. Cleave Simpson of Alamosa joined with Democrats in snuffing out Lundeen’s dumb bill.

► As Jennifer Rubin writes for The Washington Post, it’s time for Congressional leaders to get tougher on their colleagues who waste everyone’s time in Committee hearings:

Republicans have adopted a slothful, unserious and disrespectful attitude toward governing. Democrats cannot make them into serious, conscientious legislators, but the least they can demand is that they observe “some modicum of respect” and avoid deliberate propagandizing on behalf of white supremacists. Given the choice between phony comity and responsible behavior, let’s choose the latter.

► New Mexico Congresswoman Deb Haaland, President Biden’s nominee for Secretary of Interior, accepted an invitation to visit Grand Junction, which is now the home of the Bureau of Land Management. Colorado Newsline has more on Tuesday’s confirmation hearings for Haaland.

Elsewhere, USA Today is running an Op-Ed from the Udall brothers in support of Haaland’s nomination.

► As The Washington Post reports, the next battle in the gerrymandering debate is about WHO gets counted when districts are being re-drawn:

In anticipation of redistricting, Republicans are eyeing a new tactic: For decades, states have equalized the numbers of people their districts contain. But the GOP is now pushing to equalize districts’ citizen voting-age populations instead. Under this approach, noncitizens and children would be invisible for remapping purposes. Only adult citizens would count.

But are these forecasts accurate? Remarkably, no one knows. To date, no academic study has examined the consequences of changing the unit of apportionment from all people to adult citizens only.

It’s more than a little fitting that Republicans pushing this new strategy don’t even know if it actually makes sense.

On the subject of redistricting/reapportionment, Sandra Fish of The Colorado Sun attempts to estimate how population changes in Colorado could drive the makeup of new boundaries; these are just speculative guesses, of course, since there is still SO much information that we don’t yet know about the Census count.

► As Colorado Newsline reports, Rep. Lauren “Q*Bert” Boebert (R-ifle) is opposing legislation that would benefit much of her district:

…a legislative package that includes two long-anticipated Colorado public lands bills appears headed for swift passage in the House of Representatives — over the objections of the congresswoman who represents the Western Slope district where much of the affected land is located.

It’s pretty silly for Boebert to complain that she was not consulted on a bill that Rep. DeGette first proposed more than two decades ago.

► Colorado lawmakers are moving ahead with legislation intended to allow the state to skip standardized testing requirements for 2021. Lawmakers are also considering a bill that would allow alcohol takeout and delivery to continue indefinitely.

► House Minority Leader Hugh McKean hired a former Trump administration official to be his chief of staff, because of course.

► The Jefferson County School District, one of Colorado’s largest, will make a decision by the end of the week on a potential return to in-person learning.

► Some 135,000 Coloradans have tapped into new federal unemployment benefits.

► POLITICO reports on the first steps of a potentially massive investigation into the January 6 terrorist attack on the U.S. Capitol.

► The word is “fiery,” not “firey,” unless Rep. Lauren “Q*Bert” Boebert is comparing herself to an Australian firefighter: 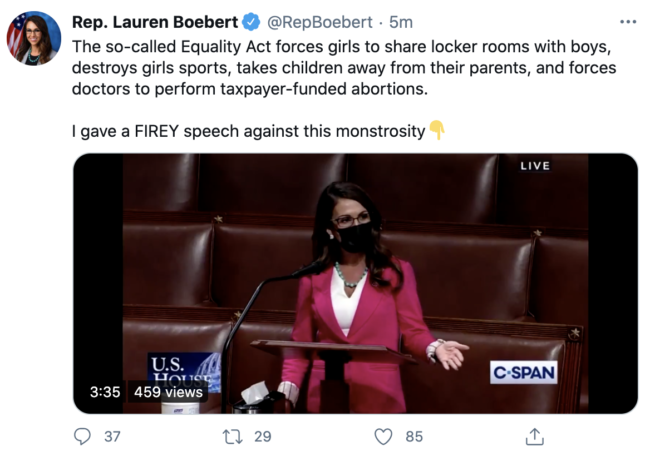 ► At least you didn’t get this tattoo.

► House Democrats passed a COVID relief package despite opposition from the likes of Rep. Lauren “Q*Bert” Boebert. The COVID stimulus package being promoted by President Biden is one of the most popular pieces of legislation in modern history — and Americans of all political stripes approve of how Biden is handling the pandemic.