48 hours ago, Lauren Boebert flew to Mar-A-Lago for a $5,800-per-plate resort fundraiser.

Today, she voted against $1,400 relief checks for Colorado families. 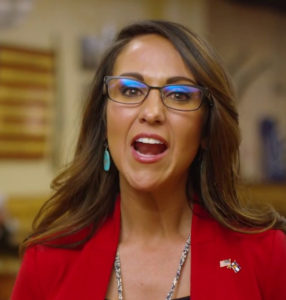 The bill must still be marked up by the Rules Committee before consideration on the House floor, likely on Friday or Saturday. The legislation will then have to be taken up in the Senate, where it is expected to face considerable procedural and political challenges…

Republicans on the panel…slammed Democrats for advancing the bill through budget reconciliation, a process that will allow them to pass it without GOP support in the Senate, saying the legislation amounted to a “liberal wish list” and arguing that many of its provisions have nothing to do with the pandemic.

“This is the wrong plan at the wrong time, and for all the wrong reasons,” said ranking member Jason Smith (R-Mo.), pointing to $350 billion in state and local aid that he said would encourage lockdowns. [Pols emphasis]

“$500 billion is included for bailing out the blue states and localities that mismanaged their budgets,” Boebert said of state and local aid.

In our experience Rep. Boebert generally cuts and pastes the talking points given to her verbatim, but the suggestion that the aid to state and local governments in the relief legislation is “bailing out the blue states” who have “mismanaged their budgets” is particularly galling coming from a representative of Colorado. Colorado, as everyone who is familiar with our state’s fiscal situation knows, runs one of the tightest budgetary ships in America under the draconian constitutional chokeholds on both taxing and spending imposed over the years. Colorado has no means of backfilling the massive revenue shortfalls brought about by the COVID-19 pandemic, and absolutely no “mismanagement” in Colorado is to blame for an economic crisis that has literally swept the globe.

Whether Boebert doesn’t know or doesn’t care about the needs of the state she was elected to represent in Congress, at a certain level, is irrelevant. The reality is that Colorado desperately needs the fiscal aid Democrats are trying to provide over Republican objections, for which the only alternative is devastating cuts to essential services Boebert’s constituents rely on. Boebert’s casual disregard for the needs of her district, from individuals hanging on for that $1,400 direct payment to the local governments across CD-3 for whom this relief is an essential lifeline, is insult piled on the injury of the long delay.

And it is “bullcrap,” just not the way Boebert thinks.