Open Carry Is Stupid, And Other Insurrection-y Observations 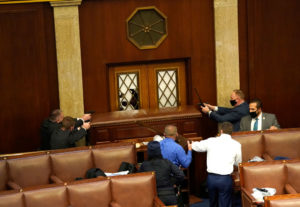 As Denver7 reports today, the FBI is warning of the possibility of continued violence ahead of the inauguration of Joe Biden on January 20th, as dead-ender Donald Trump loyalists rage on in denial of the 2020 presidential election after last week’s failed insurrection at the U.S. Capitol:

ABC News was the first to report the bulletin Monday, which also reportedly says the FBI received information about an armed group intending to travel to Washington D.C. on Jan. 16…

Law enforcement sources have told ABC News that federal law enforcement officials have advised local police to prepare for the possible protests with increased security measures at statehouses and other government buildings.

The risk of a second round of violence following last week’s shockingly successful breach of the U.S. Capitol has law enforcement across the nation on heightened alert. Here in Colorado, where we’ve seen large protests from all sides of the political spectrum in the last year from racial justice to COVIDiocy to protests for and against Trump, the apparent ease with which insurrectionists were able to overpower police and get inside what should be one of the nation’s most secure facilities stood in stark contrast to the brutally aggressive response to racial justice protesters by Denver police last summer. The investigation continues into how rioters were able to get past U.S. Capitol Police, but everything we’ve seen suggests that the insurrection could have been stopped cold.

One thing that last week’s D.C. riots and protests that take place in Denver, Colorado, do have in common — and it’s definitely a good thing — is that in both places there are laws against the open carrying of firearms. Open carrying is permitted in most locations in Colorado outside Denver, and that resulted in a previous round of “50 state capitol” protests right after the election being diverted 90 miles to LARP-friendly Colorado Springs instead. Some of the more harrowing scenes from right-wing armed protests over the past year were militia members carrying their assault weapons right into state capitols–even the galleries above legislative chambers–to menace lawmakers.

We hope law enforcement in all 50 states is ready for the next 10 days like they for whatever reason were not in Washington D.C. last week, and that we get past January 20th without any more pointless violence. For both reasons stated above, we’re somewhat less worried about Denver than other cities around the country.

We can only hope those will not be words we are compelled to eat.