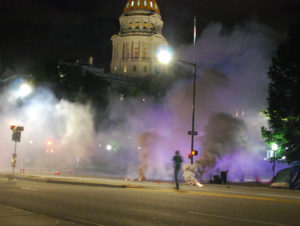 A Denver protest of the killing of Minnesota resident George Floyd by Minneapolis police officers included numerous incidents of violence Thursday evening. Although most of the several hundred attendees left before dark, the conflict continued into the night. Eventually officers deployed tear gas canisters and pepper bullets on smaller but vocal and sometimes antagonistic groups remaining near Civic Center Park.

The initial event was a large but peaceful demonstration against police brutality. That changed around 5:30 P.M. with reports of several gunshots into the crowd, State Rep. Leslie Herod was among the first to share that via Twitter. Another widely circulated video showed a car appearing to intentionally run down a protester.

Fox31’s Matt Mauro later tweeted video of dozens of protesters surrounding the Capitol building, some of whom smashed cars and vandalized the building.

Officers marched west down Colfax, advancing on groups of protesters who shouted slogans “No Justice, No Peace” along with taunts and insults.

While a caravan of police vans and officers in riot gear slowly moved several dozen protesters west on Colfax, away past the former Denver Post building, another wall of officers used tear gas and pepper bullets on a larger, rowdier group moving north on Lincoln away from the Capitol. A few protestors threw rocks or other small projectiles at officers.

Tear gas engulfed the intersection of Colfax and Lincoln affecting protesters and bystanders, as well as the residents of numerous tent encampments, some of which appeared following city sweeps of other downtown areas earlier in the week.

Many of the protesters’ signs displayed during the earlier hours of the protest decried police brutality and racism. Among the few still visible after dark, one simply displayed a noose, a doughnut and a badge.

Barricades and police vehicles blocked portions of Broadway, Colfax and other roads around downtown, yet numerous cars maneuvered around the obstacles in order to pass through the park.

Two helicopters started circling downtown as the initially peaceful protest began shortly after 5pm. At midnight, they were still making passes over the Capitol.

Late in the evening CPR reported that the Colorado House, and likely the Senate as well, will not convene on Friday.