UPDATE #7: Via CNN and Getty Images: 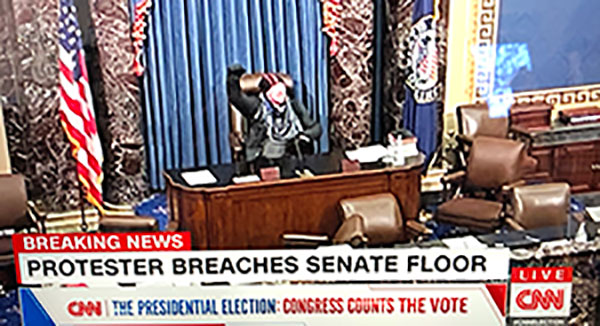 UPDATE #6: President Trump has repeatedly declined to say anything further that might defuse the situation.

Please support our Capitol Police and Law Enforcement. They are truly on the side of our Country. Stay peaceful!

Mike Pence didn’t have the courage to do what should have been done to protect our Country and our Constitution, giving States a chance to certify a corrected set of facts, not the fraudulent or inaccurate ones which they were asked to previously certify. USA demands the truth!

I’m currently in lockdown in the House chamber as the President of the United States incites his supporters to violence and to storm the Capitol. This is the outcome of Trump’s presidency.

UPDATE #3: U.S. House and Senate have adjourned as protests outside the Capitol intensify.

Another Coloradan is up now: Rep. Joe Neguse, D-Lafayette.

“The eyes of the world are on us now, colleagues, wondering if we will keep the faith, if our constitutional republic will hold.” #copolitics

UPDATE #1: We have our first objection. Congressman Paul Gosar of Arizona objects to the votes in his own state. Senator Ted Cruz objects from the Senate side. The House and Senate now go back to their respective chambers to debate on the Arizona objection. We might be here until February.