FRIDAY UPDATE: The Colorado General Assembly will not meet today or tomorrow.

The Senate will not be in session at the Capitol today or tomorrow in solidarity with those protesting police violence.

“The murder of George Floyd was a senseless, gruesome act of police violence that should be prosecuted to the fullest extent of the law. The racism and violence that black communities are forced to navigate on a daily basis is abhorrent and must be stopped. We are shocked and heartbroken by the violence that erupted in our city last night and stand in solidarity with those calling for justice. Our duty is to represent the people of Colorado and the best way we can do that right now is by respecting the gravity of this moment. Therefore, in deference to the demands for police accountability, we will be suspending all legislative work until Monday, June 1. When we return, our priority will continue to be the health, safety, and well-being of all Coloradans.”

UPDATE 8:45PM: Live aerial camera as the situation around the Capitol deteriorates, with reports of vandalism to the People’s House and damage to lawmakers’ cars:

UPDATE #2: Denver7 updates on the gunfire at the state capitol building earlier this afternoon:

Rep. Leslie Herod, D-Denver, told Denver7 in an interview from inside the Capitol Thursday evening that someone fired five or six shots from the RTD bus stop nearby into the crowd.

She said everyone ran while Colorado State Patrol troopers ushered people back inside to shelter in place. Herod said that a bullet hit the Capitol building.

“We will continue to make our voices heard and demand justice for Black communities,” Herod added in a statement. “We will not be deterred by this unspeakable act of violence.”

UPDATE: Please people, not in our town:

Downtown denver. Some girl turned around to run this guy over #GeorgeFloyd #icantbreathe #downtowndenver #denver pic.twitter.com/eirohGGPr5

This is video a short while ago from Broadway and Colfax of an unknown assailant plowing their vehicle into protesters, then swerving to hit another protester attempting to flee. Viewer discretion advised. 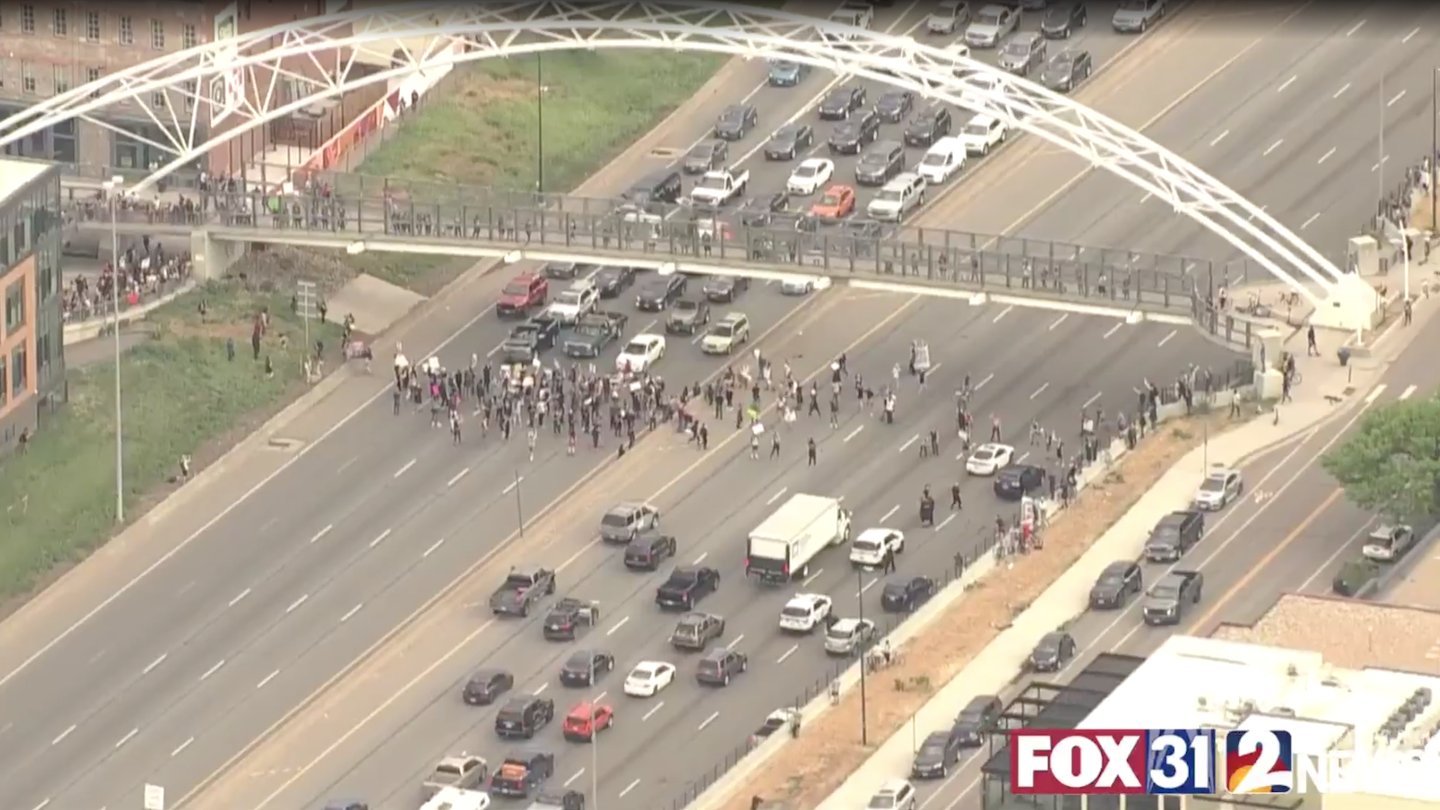 FOX 31 reporting on chaotic protests in downtown Denver in response to the police killing of Minneapolis resident George Floyd earlier this week:

Shots were fired near the Colorado state Capitol on Thursday afternoon amid a protest demanding justice following the death of George Floyd in Minneapolis.

At least five or six shots were fired. Officers at the scene told people to hit the ground…

About 7:10 p.m., the Denver Police Department said Interstate 25 was blocked near the 15th Street exit due to the protests. Drivers are urged to avoid the area.

No injuries reported from the gunfire near the state capitol, and the protest march continues in the area while another demonstration shut down traffic on Interstate 25 some distance away across downtown. We’ll update as events warrant, and of course we urge everyone to express their understandable anger peacefully.