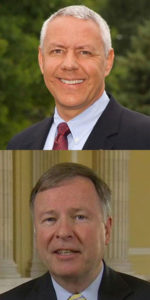 We wrote earlier about the ludicrous lawsuit out of Texas seeking to invalidate election results in Georgia, Michigan, Pennsylvania, and Wisconsin so that Democrat Joe Biden could somehow be un-elected as President. Texas Attorney General Ken Paxton filed the dubious lawsuit on Tuesday, and President Trump officially joined on Wednesday. Six other Republicans Attorneys General joined the suit on Thursday.

As Steve Vladeck, a CNN Supreme Court analyst and University of Texas Law School professor explained for CNN: “In a nutshell the President is asking the Supreme Court to exercise its rarest form of jurisdiction to effectively overturn the entire presidential election.”

Election law experts say that the Texas lawsuit has virtually no chance of succeeding, but that didn’t stop two Colorado Congressmen from joining the (lost) cause. Both Rep. Ken Buck (R-Greeley) and Rep. Doug Lamborn (R-Colorado Springs) added their names to an Amicus brief:

Look, Rep. Lamborn is not the sharpest tool in the shed, so seeing his name appear on an idiotic lawsuit is not terribly surprising. But Buck is a freakin’ lawyer who was the District Attorney in Weld County for 10 years prior to being elected to Congress. Buck SHOULD know that this is legal horse manure. Frankly, it says a lot about Buck that he probably does know that this lawsuit is nonsense but he agreed to add his name to it anyway.

Buck has shown recently that he’s happy to parrot any suggestion of election impropriety, and he is apparently more than willing to break election laws himself despite serving as the State Republican Party Chairman. The next time Buck tries to tell you about how he is “draining the swamp” in Washington D.C., you can stop him right here.