Get More Smarter on Tuesday (November 17)

Good news: There are only 45 days left in this miserable year. If you think we missed something important, please include the link in the comments below (here’s a good example). If you are more of an audio learner, check out The Get More Smarter Podcast. And don’t forget to find us on Facebook and Twitter.

► Here’s your regular reminder that the coronavirus doesn’t give a shit about your politics. As NPR reports:

As hospitals in Iowa fill up with COVID-19 patients amid a major surge in cases in recent weeks, Gov. Kim Reynolds, who once dismissed coronavirus restrictions as “feel-good” measures, has abruptly reversed course, issuing the state’s first mask mandate.

Reynolds signed a proclamation requiring Iowans over the age of 2 to wear masks in indoor public spaces starting Tuesday.

“No one wants to do this. I don’t want to do this,” Reynolds, a Republican, said at a news conference Monday.

“If Iowans don’t buy into this, we’ll lose,” she said. “Businesses will close once again, more schools will be forced to go online, and our health care system will fail.”

Last week, Iowa hit a record-high of 5,500 confirmed COVID-19 cases in a single day. As The New York Times reports, Republican governors in a number of states are being forced to acknowledge reality:

For months, Republican governors resisted calls for mask mandates. But as they have watched hospitals in their states stretched to the breaking point in recent weeks — driving home the reality of the dangers posed by a virus allowed to spread unchecked — that is starting to change.

In Utah last week, Gary Herbert, the Republican governor, issued a mask mandate “until further notice” as hospitals across the state were nearing or at full capacity.

Gov. Doug Burgum of North Dakota ordered residents of the state on Friday to wear masks indoors and outdoors if they could not socially distance. North Dakota has the country’s highest rates of new daily cases and deaths per person, according to a New York Times database.

New COVID-related restrictions are happening across the country — including in conservative bastions like Colorado’s Mesa County. Colorado is expected to add a new level to its COVID-19 meter in an announcement today.

► Governor Jared Polis will soon call a special legislative session for the purpose of allocating money for COVID relief efforts. As The Denver Post reports:

Top Democratic officials in both chambers of the statehouse say they and the Democratic governor’s office have been in talks for weeks on a possible special session, and that the failure of Congress to pass a new federal stimulus package has added urgency to those talks of late.

Polis is expected to announce the move as early as Tuesday.

Senate Majority Leader Steve Fenberg, D-Boulder, said a special session is “likely” at this point, “given the (COVID-19) surge and the impact it’s having not just on families, but small businesses.”

Housing, child care, and small business relief are among the topics expected to be included in a special legislative session.

► Efforts to recall Gov. Jared Polis have failed, again, in predictable fashion. Marianne Goodland of the publication formerly known as the Colorado Statesman has the sad details:

The second effort to recall Gov. Jared Polis has had the same results as the first: None of the 631,266 valid signatures required to put a recall on the ballot were turned in by the deadline of Nov. 13, according to the Secretary of State’s Office.

The second effort, begun Sept. 14, was launched by Lori Cutunilli of Summit County and Greg Merschel of Grand Junction, who was also involved with the 2019 effort.

► Congressman Ken Buck (R-Greeley) will soon drop his second job as Chairman of the Colorado Republican Party. In his place: Former Secretary of State Scott Gessler. If you are a Broncos fan, this is like debating between Vic Fangio and Vance Joseph as head coach. Or choosing a general manager between John Elway and…John Elway.

► The election isn’t over yet in the race for District Attorney in Colorado’s 18th Judicial District (which is largely made up of Arapahoe County). As 9News reports:

The election for district attorney for the 18th Judicial District seemed to be headed to a recount on Monday as only 1,418 votes separated the two candidates.

Republican John Kellner was leading Democrat Amy Padden in the race to succeed George Brauchler, a Republican who was first elected district attorney in 2012 for the district that includes Arapahoe, Douglas, Lincoln and Elbert counties.

Padden is probably unlikely to close the distance on Kellner in a recount, but the results do indicate good news for Democrats in one regard: Padden easily won among Arapahoe County voters, which will become its own judicial district in 2025.

► President-elect Joe Biden announced a bunch of senior staff hires on Tuesday. From The Washington Post:

Longtime aides Mike Donilon and Steve Ricchetti will step in as senior adviser and counselor to the president, respectively. Biden’s campaign manager, Jen O’Malley Dillon, will be deputy chief of staff. And his campaign’s general counsel, Dana Remus, will be counsel to the president, acting as Biden’s top attorney in the White House.

Rep. Cedric L. Richmond (D-La.), one of Biden’s most prominent African American allies, will leave Capitol Hill to become senior adviser to the president and director of the White House Office of Public Engagement.

Julie Chávez Rodríguez, a deputy campaign manager for Biden, will become director of the White House Office of Intergovernmental Affairs. She has worked for Vice President-elect Harris and is the granddaughter of labor activist César Chávez.

Annie Tomasini will become director of Oval Office operations. She has been Biden’s traveling chief of staff.

Meanwhile, you can add Florida Sen. Marco Rubio to the list of Republicans who have publicly acknowledged that Biden will be the next President of the United States. Congresswoman-elect Lauren “Q*Bert” Boebert, meanwhile, maintains her window seat on the “Trump won the election” train.

► President Trump’s campaign is running out of lawsuits as it struggles in vain to change the outcome of the 2020 election.

► As POLITICO reports, House leadership elections this week are expected to maintain much of the status quo under Speaker Nancy Pelosi. But the fight for some committee chairmanships could be fairly intense.

Stephen I. Vladeck, an election law guru and University of Texas law professor, tells me, “At least as relayed in the Post story, Sen. Graham appears to have been attempting to convince Secretary Raffensperger to alter the valid results of Georgia’s election — in a manner that may run afoul of numerous provisions of Georgia election law.” He adds, “At the very least, it’s a serious matter that might warrant further investigation — and that is grossly unbecoming of any United States senator, let alone the chairman of the Senate Judiciary Committee.”…

…The alleged behavior is serious, unseemly and raises legitimate questions. Whether or not any of these or other laws were broken must be investigated, but Graham’s actions have called into question his willingness to uphold the sanctity of elections.

Senator Graham’s election meddling is getting to be a much more complicated story — and none of it is good for Graham:

This is false. I have not spoken with @LindseyGrahamSC. https://t.co/Cy9iUvrg3K

► Vox.com reports on a case that will be taken up by the Supreme Court that could make significant changes to workplace regulations.

The Supreme Court announced on Friday that it would hear Cedar Point Nursery v. Hassid, a case targeting a 45-year-old California regulation that allows union organizers to briefly enter agricultural workplaces to speak to farmworkers. But the case has implications that stretch well beyond labor organizing. Among other things, Cedar Point could potentially allow businesses to deny entry to health inspectors and other government officials who ensure that those businesses are being operated safely. [Pols emphasis]

► The Washington Post reports on a nurse’s story from South Dakota, where patients are insisting that they do not have the coronavirus right up to their very last breath:

…Doering said she has covid-19 patients who need 100-percent-oxygen breathing assistance and who will also swear they don’t have the illness that has ended the lives of nearly a quarter-million people in the United States since February.

“I think the hardest thing to watch is that people are still looking for something else and a magic answer and they do not want to believe covid is real,” Doering told CNN in an interview Monday.

“Their last dying words are, ‘This can’t be happening. It’s not real,’” Doering said, adding that some patients prefer to believe that they have pneumonia or other diseases rather than covid-19, despite seeing their positive test results.

The New York Times reports on a county in Texas — Loving County — that continues to insist that it has NO COVID-19 infections (which isn’t true).

► President Trump refuses to concede that he lost the 2020 election. Now he’s making new problems for Republicans by opening the door to running again in 2024.

► The Associated Press points out once again that President Trump DID NOT WIN THE 2020 ELECTION.

► Colorado Public Radio looks at who might be first on the list to receive a coronavirus vaccine in our state.

► Casa Bonita, the infamous Mexican-food restaurant on West Colfax, says it has no plans to close permanently after being shuttered for months because of the coronavirus. However, Casa Bonita’s owners say they have no idea when they might be able to reopen. 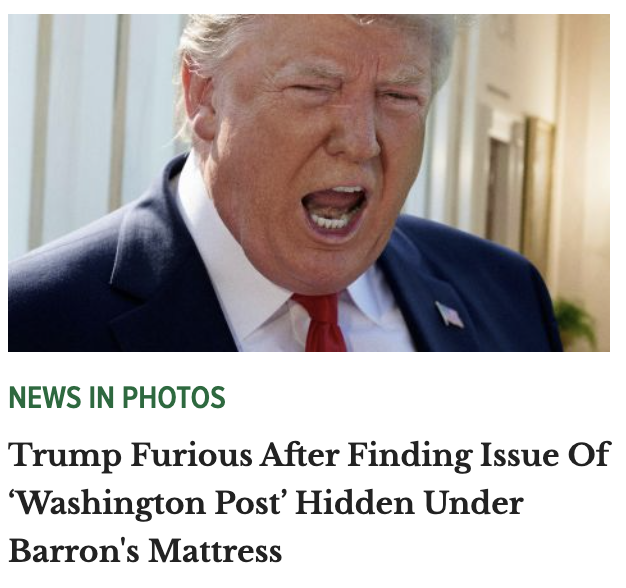 ► President Trump appears to have lost all interest in the actual job of being President of the United States. More than one news outlet has taken notice.