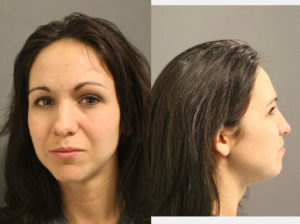 “When I didn’t pay my $100 traffic ticket, I was separated from my kids for about an hour until I got it taken care of.” — Lauren Boebert

The Aspen Daily News followed a trend in CO-03 this week by endorsing Democrat Diane Mitsch Bush over Republican Lauren “Q*Bert” Boebert. Virtually every newspaper in the vast Western/Southern Colorado congressional district has backed Mitsch Bush instead of Boebert, and often for the same reasons: Boebert has absolutely no idea what she is talking about when it comes to policy issues.

Boebert has regularly refused to meet with newspaper editorial boards, including those of The Denver Post and The Grand Junction Daily Sentinel, and for good reason: When you ask Boebert a question that she can’t answer with a talking point about “freedom,” what you get in response is absolute nonsense.

And sometimes, much, much worse. From The Aspen Daily News:

Our concerns with Boebert largely come back to her seemingly superficial understanding of issues and her quickness to parrot the same talking points coming from her party’s leadership — mainly, President Donald J. Trump. For instance, she spoke passionately about immigration reform, but when, as an aspiring representative of many resort communities on the Western Slope, she was asked about J-1 visas, she allowed that she wasn’t familiar with that particular visa type.

When asked if she condemned the administration’s policies that allowed for children to be separated from their parents — in the same week that the American Civil Liberties Union reported that the federal government has so far failed to locate the parents of 545 children victims of the “no tolerance” policy — Boebert replied that “when parents break the laws, sometimes things happen.”

She went on to liken a nearly 10% alleged failure to effectively track the parents of children separated at the border, even amid asylum requests, to her anecdotal experience following an arrest for an unpaid parking ticket.

“When I didn’t pay my $100 traffic ticket, I was separated from my kids for about an hour until I got it taken care of,” she said. [Pols emphasis]

Boebert has a troubling history of just ignoring things like laws and court orders that she believes apply to everyone else, but she also apparently has no ability to differentiate between CHILDREN BEING RIPPED FROM THE ARMS OF THEIR PARENTS to going to court to deal with a misdemeanor offense.

This is more than just an asinine comment from an ill-prepared candidate. This is weird. Boebert’s perspective isn’t odd for a politician — it’s strange behavior from a human being.