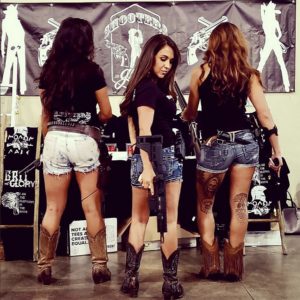 A Rifle restaurant owned by Colorado congressional candidate Lauren Boebert once had its liquor license temporarily suspended for serving alcohol to an underage (and undercover) Liquor Enforcement Division employee.

The restaurant, Putter’s Pub & Steakhouse, admitted to the 2015 violation and paid a fine.

Boebert herself didn’t sell the beer to the juvenile, and many establishments each year are caught selling booze to minors in Colorado.

But Boebert has exhibited a pattern of disregarding laws aimed at protecting juveniles.

In two additional instances, one related to alcohol consumption by minors and another to gun possession, she was hostile to or outright flouted such laws.

In 2015, the same year of her liquor license suspension, Boebert encouraged minors to flee police detention after the youngsters were arrested for drinking at the Country Jam music festival in Grand Junction.

The Mesa County Sheriff’s description of Boebert’s frantic efforts to convince the juveniles to high tail it from police is best grasped if you read the account of Colorado Newsline, which first reported on the incident.

Boebert tried to get juveniles, who were being held near the concert venue, to “leave the custody of law enforcement,” wrote Colorado Newsline.

Boebert was yelling at the children, claiming wrongly their arrests were illegal and “trying to get [them] to leave the custody of law enforcement,” according to the Mesa County Sheriff’s report, as quoted by Colorado Newsline.

“Lauren continued yelling and causing the underage drinkers to become unruly,” deputies wrote of Boebert in explaining why she was arrested. “Lauren’s behavior was becoming likely to cause a disorderly response from those in the area attending the concert.”

RELATED: Let Boebert Grow Up, Say Her Defenders, But Read the Report of Arresting Officers and See What You Think

In another instance of disregarding laws pertaining to juveniles, she let a teenage server illegally carry a gun at Shooter’s Grill, which has garnered wide publicity for its practice of having servers carry firearms on their waists.

The unnamed 17-year-old server interviewed in a TV news report says Boebert “allows me to” carry a gun, even though it’s illegal in Colorado to do so.

“Well, because I’m seventeen, I actually can’t carry it everywhere,” said one of Boebert’s servers in a Barcroft TV interview, shot in 2015, referring to the gun on her hip. “I can carry at work because it’s Lauren’s private property. And she allows me to.”

Even though the interview with the teenager remains on the website for Shooters Grill, Boebert told KHOW’s Ross Kaminsky that underage servers in her diner don’t carry firearms.

Boebert’s opponents have seized on the gun-possession incident.

The Brady PAC, in anti-Boebert advertisement titled “Lauren Boebert: Dangerous for Congress,” characterizes her encouragement of a minor to “illegally carry a gun at her restaurant” as “reckless.”

Boebert “is absolutely not responsible enough to represent Colorado in Congress,” said George Autobee, Co-Chair of Rural Colorado United, which is campaigning against Boebert and distributed public records about Boebert’s restaurant’s liquor license in a news release.

“She is simply not a responsible adult,”  stated Autobee.

For her part, Boebert, whose campaign didn’t comment on this article, has stated that the news media has unfairly targeted her without giving equal treatment to her opponent, Democrat Diane Mitsch Bush.