Get More Smarter on Tuesday (October 27)

STOP! If you still have a mail ballot at home, DO NOT DROP IT IN THE MAIL. We are close enough to Election Day that you now need to take your completed ballot to a local collection box; visit GoVoteColorado.com for more information. Let’s Get More Smarter. If you think we missed something important, please include the link in the comments below (here’s a good example). If you are more of an audio learner, check out The Get More Smarter Podcast. And don’t forget to find us on Facebook and Twitter.

► The Republican Senate finished ramming through their confirmation of Amy Coney Barrett to the Supreme Court on Monday evening. This is the same Republican Senate that hasn’t been able to move ahead on any sort of coronavirus stimulus bill since the House of Representatives passed the HEROES Act in May, but they managed to confirm a SCOTUS nominee in a matter of weeks.

We probably don’t need to tell you that Sen. Cory Gardner (R-Yuma) was a ‘YES’ vote.

► Voters continue to turn out in record numbers in Colorado and across the country. As The New York Times explains, this is not good news for Republicans:

A week before Election Day, more than 64 million Americans have already voted — and about half of them are in the dozen or so competitive states that will ultimately decide who wins the Electoral College.

Possibly even more significant, early votes in these battlegrounds account for more than half of those states’ total votes in 2016. Nationally, voters have already cast about 46 percent of the total vote counted in 2016, according to the United States Elections Project.

► The campaigns for President Trump and Democrat Joe Biden, respectively, can telegraph much of their last week strategy based on travel plans. Biden was in Pennsylvania on Monday and will travel to Georgia today before a stop later this week in Iowa; he will also visit Tampa Bay, FL and Wisconsin before Election Day.

As for Trump, he’s traveling to Arizona, Michigan, Wisconsin, Pennsylvania, and Nevada.

When asked if she condemned the administration’s policies that allowed for children to be separated from their parents — in the same week that the American Civil Liberties Union reported that the federal government has so far failed to locate the parents of 545 children victims of the “no tolerance” policy — Boebert replied that “when parents break the laws, sometimes things happen.”

She went on to liken a nearly 10% alleged failure to effectively track the parents of children separated at the border, even amid asylum requests, to her anecdotal experience following an arrest for an unpaid parking ticket.

“When I didn’t pay my $100 traffic ticket, I was separated from my kids for about an hour until I got it taken care of,” she said. [Pols emphasis]

We’d call this unbelievable, but we ARE talking about the same Lauren “Q*Bert” Boebert. As Alex Burness reports for The Denver Post, many Colorado conservatives think Boebert is the future of the party.

► White House Chief of Staff Mark Meadows has a pending appointment…under the bus. As The Washington Post reports:

With Trump trailing Democratic challenger Joe Biden and the coronavirus pandemic surging again, Meadows’s uneven handling of the pandemic response and other West Wing crises has dismayed many staffers and campaign officials, who say he has largely proved to be an ineffective chief of staff, instead serving more as a political adviser and confidant…

…Many of those with whom he works … say the former House lawmaker has struggled with the management challenges of the chief-of-staff position — sending mixed messages in stimulus negotiations, bungling aspects of Trump’s recent coronavirus hospitalization and regularly failing to communicate inside the West Wing and with many other parts of the administration.

A spokesman for Meadows declined to make him available for an on-the-record interview. This accounting is based on interviews with 18 White House officials, Trump advisers, Capitol Hill aides and others, many of whom spoke on the condition of anonymity to reveal internal deliberations.

► The Aspen Daily News becomes the 13th Colorado newspaper to endorse Democrat John Hickenlooper for U.S. Senate. Hickenlooper’s campaign is using these endorsements to its advantage in a new advertisement:

► In case you were under the illusion that Proposition 115 was NOT a first stage attempt at outlawing abortion altogether, this should clear up your thinking.

► Senator Cory Gardner (R-Yuma) is now claiming that Republicans actually have a health care plan. They do not.

► The City of Denver is warning that stay-at-home orders could be on the horizon if residents don’t do more to stem the rising rate of COVID-19 infections in the city. As Meg Wingerter reports for The Denver Post, it’s not just Denver that is having problems:

The Colorado School of Public Health estimated about one in every 292 people in the state is currently contagious. That’s approaching levels seen during the virus’s first wave in April, said Beth Carlton, an associate professor of environmental and occupational health…

…Eight counties, including Denver and Adams, had high-enough numbers of new coronavirus cases to trigger a stay-at-home order under the state’s color-coded dial framework, though they have a grace period to bring those numbers down before being moved into the red zone.

“Denver’s #COVID19 situation is looking bad. Really bad,” the city said in its tweet. “No seriously, what we are doing isn’t working.”

► The Colorado Sun considers the impact of Pueblo voters in the 2020 election.

► As The Grand Junction Daily Sentinel reports, the race for Congress in CO-03 may be trending blue:

Not only does a new poll continue to show Democrat Diane Mitsch Bush with a slight lead over her Republican opponent, Rifle restaurant owner Lauren Boebert, but early ballot returns and campaign fundraising numbers favor the Steamboat Springs resident, too.

While that poll shows Mitsch Bush leading by only one percentage point over Boebert, it also indicates that she has a 17-point advantage among unaffiliated voters.

As Charles Ashby notes for the Sentinel, both Democrats and Unaffiliated voters have thus far cast ballots in higher numbers than Republicans in CO-03.

► Colorado Public Radio reports on strange bedfellows involved in an effort to create a vaping tax in Colorado.

► Keep your distance from Aurora Mayor Mike Coffman, for reasons beyond his politics.

► The Ball Sack (er, Arena) is now open for voting.

► Colorado State Senator Cory Gardner! For his next act, perhaps Gardner is going to run for the legislature. 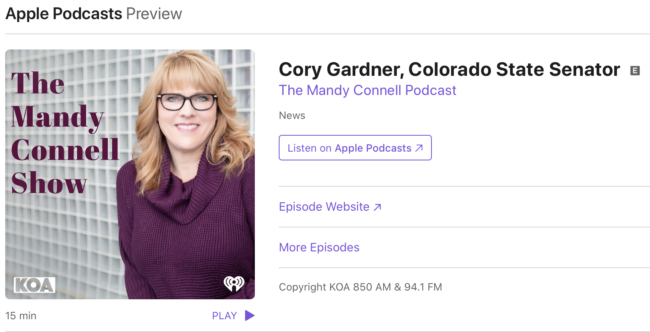 ► President Trump is still convinced that drawing a crowd to an event indicates success in and of itself.

► This story about Lauren “Q*Bert” Boebert is worth mentioning twice.