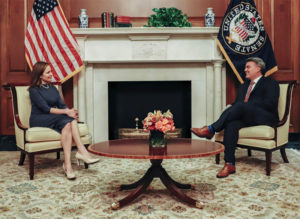 Colorado’s senators followed their parties’ lead when it came to voting Judge Amy Coney Barrett onto the Supreme Court Monday. Democratic Sen. Michael Bennet voted against her confirmation, while Republican Sen Cory Gardner voted for it.

She was confirmed along party lines 52-48, with no Democrats voting for her confirmation.

Bennet and Gardner both took to the Senate floor ahead of the vote, decrying the highly partisan process.

Gardner said Monday afternoon that, “if you can take the politics out of the place, she would probably have a unanimous vote. Unfortunately, the politicization of this nomination is going to prevent that.”

“Decrying the highly partisan process” that ended last night with the swearing in of Amy Coney Barrett to the U.S. Supreme Court, over the express dying wish of Justice Ruth Bader Ginsburg that her replacement be appointed after a new president is sworn in in January, is a risible distortion of the history of Republican treachery regarding high court appointments going back to 2016, when the same Cory Gardner and Senate Republicans refused to grant President Barack Obama’s nominee to replace Antonin Scalia a hearing months before the presidential election to be held that year. Gardner’s excuse for acting differently in 2020 was simply that the Senate and White House are controlled by the same party. How can Gardner complain about a “partisan process” when partisanship is literally the only reason this is happening?

The real mistake here would be to spend any time trying to honestly reconcile Gardner’s words with his deeds. The confirmation of Amy Coney Barrett happened yesterday for the same reason Merrick Garland’s confirmation didn’t happen in 2016: Republicans had the power to do what they wanted in both cases. All of the stated justifications for taking opposite actions in response to the same circumstances are meaningless, even insulting to the nation’s collective intelligence. The only thing that matters, then and now, is power.

In 2014, it was in part reliance on the theory that Gardner’s ability to carry out his anti-abortion agenda would be self-limited by the deliberative nature of the Senate that justified the Denver Post’s backhanded endorsement of Gardner–going so far as to call worries about the threat Gardner posted to abortion rights a “tedious refrain.” Today, with abortion rights in mortal danger beyond even what Gardner’s opponents in 2014 could have predicted, the naivete of Gardner’s apologists in 2014 has been laid bare more completely than any Democratic ad campaign could possibly manage.

There is only one lesson from all of this, and it could not be more timely. Elections matter.

Whatever happens next, a generation of Colorado voters have seen enough to never be fooled again.