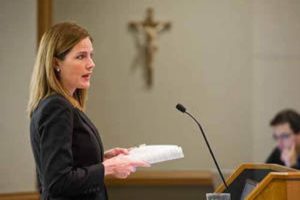 CNN reports, and the American culture wars enter a new and perilous phase:

President Donald Trump intends to choose Amy Coney Barrett to be the new Supreme Court justice, according to multiple senior Republican sources with knowledge of the process…

Barrett has been the leading choice throughout the week, since Justice Ruth Bader Ginsburg died. She is the only potential nominee known to have met with the President in person, according to two of the sources. One source said Trump was familiar with Barrett already and he met with her since she was a top contender the last time there was a Supreme Court vacancy, when the President chose Justice Brett Kavanaugh instead.

“The machinery is in motion,” one of the sources said. In previous nomination announcements, the White House had multiple rollouts planned in case the President made a last-minute decision to switch to another candidate. But one source said it would be surprising if there were a change since allies are already being told.

At age 48, Barrett is set to join President Donald Trump’s other two youthful Supreme Court Justices in cementing a 6-3 conservative majority just in time for the possible collapse of electoral democracy in November–and a pick now known to the world before Justice Ruth Bader Ginsburg could even be buried. And she completes the sea change that puts rights once considered to be settled law in danger:

Amy Coney Barrett, who is expected to be Mr. Trump’s pick, meets the president’s unprecedented anti-abortion rights litmus test. The federal judge has referred to abortion as “always immoral” and offers something a former top candidate, Barbara Lagoa, doesn’t: A clear anti-abortion rights judicial record. During her three years on the 7th Circuit Court of Appeals, she has already ruled on two abortion-related cases, both times favoring restrictions on access to abortion…

Many believe that overturning Roe v. Wade — the landmark 1973 Supreme Court decision that legalized abortion nationwide — is no longer a hypothetical. [Pols emphasis] The vacancy on the court follows the death of Justice Ruth Bader Ginsburg, who was not only liberal but an unequivocal supporter of abortion rights. Though Mr. Trump’s two Supreme Court nominations — Justices Neil Gorsuch and Brett Kavanaugh — have been against abortion rights, both replaced conservative justices, effectively leaving the balance of the court nearly untouched.

In 2014, when now-Sen. Cory Gardner’s opponents warned as loudly as they could that he would put abortion rights in America in fundamental danger, it wasn’t possible to see then how right they were. We have arrived at a moment in history when the worst fears of 2014, dismissed as a “tired refrain” by Colorado pundits and the political oddsmakers, have been fully realized.

Vote accordingly, but understand that more than a single election will be needed now.