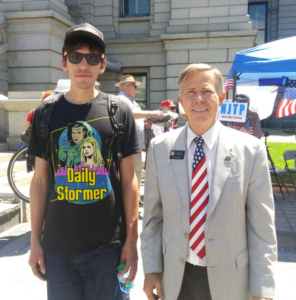 From the high-commission conservative fundraising site Freedomfy–that’s right, kids, Jon Caldara has a piece of the action–comes a preview of an upcoming Very Important Self-Published Book™ written by a hefty group of Republican lawmakers and hard-right local activists just in time for the 2020 election season: UNMASKED2020: Colorado’s Radical Left Turn and a Warning to America.

Are you excited? Because we’re excited:

The book, UNMASKED2020: Colorado’s Radical Left Turn and a Warning to America, will consist of 15 chapters in approximately 200 pages, each written by a different contributor. Five of the fifteen coauthors are current or former elected Colorado legislators, including a former President of the State Senate and a former chairman of the Senate Health Committee. Two are involved with broadcast journalism, two are attorneys, one the director of a university-based think tank, one a former deputy administrator of a federal agency, and another a former Colorado regional coordinator for Americans for Prosperity.

The “partial list” of contributors to UNMASKED2020 isn’t exactly an “A-List” of Colorado Republicans, but it is a fair number with a few modestly notable names: former Colorado Senate President John Andrews, Jeff Hunt of the religious right Centennial Institute, former fringe-right Sen. Kevin Lundberg, local talk radio freakshow Randy Corporon, the “gruesome twosome” of Rep. Kim Ransom and Rep. Dave Williams, and Sen. Rob Woodward who colleagues know is a charming man to work both for and with. Lundberg narratives the preview video above, and let’s face it, folks: the man’s got a golden voice.

As for what these very fine people have to say in the actual book, it’s not looking real good.

“First the coronavirus pandemic upended everything. Then in May after another few weeks, racial tensions flared following the George Floyd death. Then before long, well-organized seditious elements began abusing the people’s freedom of assembly with violent nihilist riots. The shock and strain these compounding crises placed upon Colorado’s institutions of self-government, and on the elected officials leading them, can hardly be overstated…. But I agree with our chapter authors that these leaders and too many others in state government, local government, public health, and law enforcement did not rise to the occasion as we the people had a right to expect they should.”

“In mid-February the grassroots activists received a slap in the face. The vaccination bill that was defeated last year came back to life. SB 20-163, “School Entry Immunization,” was introduced…. Like last year, hundreds of parents with children in-hand testified before the Senate committee hearing. Once again politicians disregarded the personal stories and comments from citizens and parents and passed the bill.”

In short, if you believe that everything and everybody including your local fire department is out to get you, especially anybody who tells you to (gasp) wear a mask or (gasp even harder) vaccinate your kids, this book is for you! But based on every poll in sight on all of these issues, we can say pretty confidently that’s not anything remotely close to a majority of Colorado voters.

All told, this will earn Colorado Democrats more support than the Republicans it’s supposed to help.