At Least It’s Not Your State Capitol

FRIDAY UPDATE: It’s more than a little disconcerting to bring you this update, but the President of the United States has thrown his lot in with the armed protesters who stormed the Michigan state capitol building yesterday.

The Governor of Michigan should give a little, and put out the fire. These are very good people, but they are angry. They want their lives back again, safely! See them, talk to them, make a deal.

We’re not sure what to say about this right now, except that we hope it’s not a preview of Election Day 2020.

Directly above me, men with rifles yelling at us. Some of my colleagues who own bullet proof vests are wearing them. I have never appreciated our Sergeants-at-Arms more than today. #mileg pic.twitter.com/voOZpPYWOs 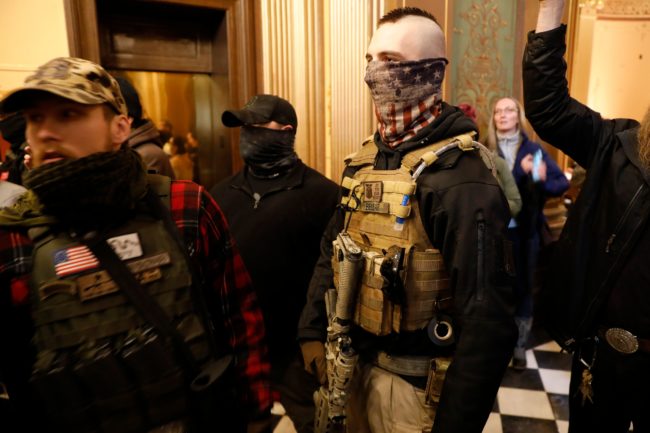 Protestors try to enter the Michigan House of Representative chamber in Lansing, Michigan on April 30, 2020. (Photo by JEFF KOWALSKY/AFP via Getty Images)

NBC News reports on a frightening scene today outside and inside the Michigan state capitol building in Lansing:

Hundreds of Michigan residents protested outside the state Capitol building in Lansing on Thursday, with some pushing inside while the Legislature was debating an extension of Gov. Gretchen Whitmer’s state of emergency in response to the coronavirus pandemic.

Protesters held signs, waved American flags and even carried firearms while some chanted, “Let us in!” and “This is the people’s house, you cannot lock us out,” and others tried to get onto the House floor but were blocked by state police and sergeants-at-arms, according to WDIV-TV, an NBC affiliate in Detroit.

Still, men carrying semiautomatic long guns in the galleries of the legislature shouting threats down at lawmakers can only be considered a highly alarming development for anyone who’s a fan of representative small-d democracy, and we hope that’s all of our readers. We acknowledge the (we hope) small fraction of Americans who think elected officials work better when being personally threatened with violence, but we think a majority will agree this isn’t how we do things in America even in a pandemic.

Here in Colorado, it’s not legal to openly carry weapons in the city of Denver where our capitol building is located, and inside the only people allowed to carry concealed weapons are lawmakers who controversially consider themselves exempt from the ban on firearms everyone else must observe. Last Sunday, a “Reopen Colorado” protester openly carrying a gun across the street from the building had to relearn Denver’s gun laws the hard way.

With that said, there are certainly those among our local pro-COVID “freedom fighters” who would do this if they could.

Let’s hope they all got the memo last Sunday and know better than to try.