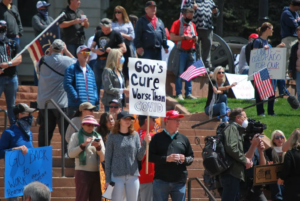 FOX 31 reports from yet another Pro-COVID rally yesterday in downtown Denver–not nearly as sizable as last Sunday’s “Operation Gridlock” communicable disease honkfest, but featuring one very foolish individual in particular:

The Denver Police Department said a protester was arrested on Sunday at the Capitol for openly carrying a firearm in a holster, which is against the law in Denver.

A protest was held at the Capitol Sunday because of the COVID-19 closures.

Denver has an open-carry prohibition, which means you cannot openly carry a weapon anywhere in Denver, including at the Capitol.

As you can see in the video posted by freak-right activist Lesley Hollywood of “Rally For Our Rights,” ostensibly in defense of the openly armed protester arrested yesterday, the offender claims to possess a concealed carry permit. The problem with that, of course, is that concealed carry permit holders by definition have a greater obligation to know the relevant gun laws wherever they go with a weapon. Every responsible gun owner in Colorado knows you cannot openly carry guns in the City and County of Denver, and if you’re not a responsible gun owner you should not possess a concealed weapons permit.

All of this is true before the guy started resisting arrest like a drunk at closing time, which he persisted in doing until eventually being obligatively put on the ground and cuffed by Denver Police and Colorado State Patrol while the crowd screams bloody murder–at the cops, mind you, not the idiot flagrantly violating Denver’s gun laws and then resisting arrest. All told, it’s an incident that casts the pro-COVID “freedom fighters,” the gun nuts, and the fact that they are on the same team in the least favorable light possible.

If you disregard gun laws, then resist arrest for violating gun laws, maybe you shouldn’t have guns.